In grammar and theoretical linguistics, government or rection refers to the relationship between a word and its dependents. One can discern between at least three concepts of government: the traditional notion of case government, the highly specialized definition of government in some generative models of syntax, and a much broader notion in dependency grammars.

In traditional Latin and Greek (and other) grammars, government refers to the selection of grammatical features by verbs and prepositions. Most commonly, a verb or preposition is said to "govern" a specific grammatical case if its complement must take that case in a grammatically correct structure (see: case government).[1] For example, in Latin, most transitive verbs require their direct object to appear in the accusative case, while the dative case is reserved for indirect objects. The verb favere (to help), however, is an exception to this default government pattern: its direct object must be in the dative. Thus, the phrase I see you would be rendered as Te video in Latin, using the accusative form te for the second person pronoun, while I help you would be rendered as Tibi faveo, using the dative form tibi. Prepositions (and postpositions and circumpositions, i.e. adpositions) are like verbs in their ability to govern the case of their complement, and like many verbs, many adpositions can govern more than one case, with distinct interpretations.

In government and binding theory

The abstract syntactic relation of government in government and binding theory, a phrase structure grammar, is an extension of the traditional notion of case government.[2] Verbs govern their objects, and more generally, heads govern their dependents. A governs B if and only if:[3]

This definition is explained in more detail in the government section of the article on government and binding theory.

One sometimes encounters definitions of government that are much broader than the one just produced. Government is understood as obtaining between a word and the constituents that that word requires or allows to appear.[4] This broader understanding of government is what one finds in many dependency grammars. A given word governs all those words that it requires or allows to appear. The notion is that many individual words in a given sentence can appear only by virtue of the fact that some other word appears in that sentence. Government is defined as follows:

Government
Government obtains when a dominant element (head) A opens a slot for a dependent element B.[5]

According to this definition, government obtains between any two words connected by a dependency, the dominant word opening slots for subordinate words. The dominant word is the governor, and the subordinates are its governees. The following dependency tree illustrates governors and governees: 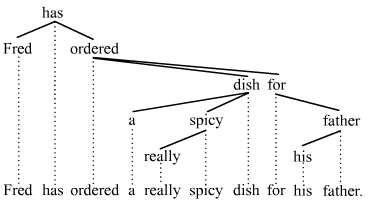 The distinction between the terms governor and head is a source of confusion, given the definitions of government produced above. Indeed, governor and head are overlapping concepts. The governor and the head of a given word will often be one and the same other word. The understanding of these concepts becomes difficult, however, when discontinuities are involved. The following example of a w-fronting discontinuity from German illustrates the difficulty:

Two of the criteria mentioned above for identifying governors (and governees) are applicable to the interrogative pronoun wem 'whom'. This pronoun receives dative case from the verb geholfen 'helped' (= case government) and it can appear by virtue of the fact that geholfen appears (= licensing). Given these observations, one can make a strong argument that geholfen is the governor of wem, even though the two words are separated from each other by the rest of the sentence. In such constellations, one sometimes distinguishes between head and governor.[7] So while the governor of wem is geholfen, the head of wem is taken to be the finite verb denkst 'think'. In other words, when a discontinuity obtains, one assumes that the governor and the head (of the relevant word) are distinct, otherwise they are the same word. Exactly how the terms head and governor are used can depend on the particular theory of syntax that is employed.