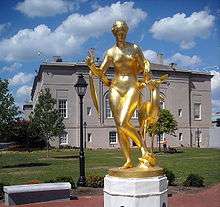 Jennewein was born in Stuttgart in Germany. At the age of seventeen, he immigrated to the United States in 1907.

He was apprenticed with the firm of Buhler and Lauter in New York where he received his early training. He took evening classes at the Art Students League of New York. Much of his early work was as a muralist, including in 1912 four murals for the Woolworth Building; the first building to be called "the Cathedral of Commerce."

In 1915 Jennewein became a naturalized U.S. citizen when he was twenty-five years old. Soon afterward he entered the United States Army. In 1916 his tour was cut short when he was awarded an honorable discharge after receiving the Rome Prize, a highly sought-after art award. This allowed him to study at the American Academy in Rome for the next three years; in Rome Jennewein turned his attention to sculpture. By 1928, Jennewein had set up his studio in the Van Nest section of the Bronx where he remained until 1978, the year of his death. 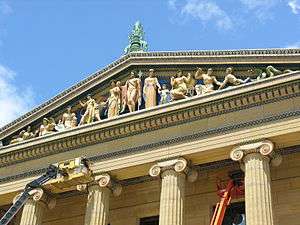 In the course of their careers, Carl Paul Jennewein and his partner Warren Straton produced at least five monumental eagles: one at the entrance to Arlington National Cemetery in Arlington, Virginia, another on the Arlington Memorial Bridge, connecting Arlington with Washington, D.C., the third on the Federal Office Building in New York, the fourth, a Spanish-American War Memorial in Rochester, New York.

The fifth was at Ardennes Memorial located in Neuville-en-Condroz in Belgium. They also produced somewhat smaller eagles for the gates of the Embassy of the United States in Paris.

Jennewein's sculpture, which never strayed too far from the classical ideals that he had come to so admire while in Rome, became increasingly modernized and his style comfortably fits into the Greco Deco category.

Jennewein's work received some attention when his Noyes Armillary Sphere disappeared during a riot in Washington, D.C. in the turbulent 1960s. It has not yet been recovered.

He also executed a number of medals during his career. In 1933, Jennewein sculpted Glory and Fame, the seventh issue in the long running Society of Medalists series. He also designed the inaugural medal for President Harry S. Truman in 1949.

In 2002, two of Jennewein's semi-nude figures in the Robert F. Kennedy Department of Justice Building in Washington, D.C. were hidden behind a curtain. This has been linked to the exposed breast on the female figure, Spirit of Justice (the male counterpart is Majesty of Law). In 2005 the curtain was removed.[2]

Because Jennewein's studio was located in the Van Nest section of the Bronx, an honorary street sign was designated on June 2, 2011, to reflect his 50 years of contributions to the world of art and sculpture. Among those in attendance at the renaming ceremony were Jennewein's son James and his wife. Additionally, representatives from the National Sculpture Society and Brookgreen Gardens also were present for the unveiling ceremony.[3][4]

In 1929 he was elected into the National Academy of Design as an Associate member and became a full Academician in 1933.