Lowey was born in the Bronx in New York, New York, the daughter of Beatrice (Fleisher) and Jack Melnikoff.[1] She graduated from The Bronx High School of Science and then Mount Holyoke College with a bachelor's degree in Liberal Studies. She served as a government official before entering elected politics and was once the Assistant Secretary of State of New York. 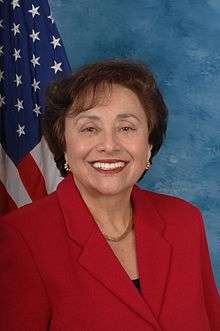 Lowey was first elected to the House of Representatives from New York's 20th congressional district in 1988. Following redistricting after the 1990 Census, Lowey was elected from the 17th district. Her district is located in the northern suburbs of New York City and includes most of Westchester County including, White Plains, Chappaqua, Greenburgh, Scarsdale, Tarrytown, Ossining and all of Rockland County, including the county seat New City, Haverstraw, and Congers. She used to represent parts of Queens and the Bronx, until redistricting after the 2000 Census created her current district.

Lowey strongly considered running for the United States Senate in 2000, but stepped aside when First Lady of the United States Hillary Clinton announced her candidacy. Lowey was considered a top contender for appointment to Clinton's Senate seat after Clinton was nominated to be Secretary of State, but in a December 1, 2008 phone interview with the Associated Press, she stated that she isn't interested in giving up her senior seat on the House Appropriations Committee.[2]

In 2004, Lowey received 69% of the vote against political newcomer Richard A. Hoffman, a Wall Street investor and largely self-funded candidate who ran on a platform of opposing special interests and cutting federal taxes. Lowey emphasized her track record on homeland security issues, notably her work to reform the formula for distributing homeland security grants to states.

Lowey was re-elected to an eleventh term in 2008, with 68% of the vote against unsupported James C. "Jim" Russell.

Lowey received an "A" on the Drum Major Institute's 2005 Congressional Scorecard on middle-class issues. She received 12% on the Club for Growth's 2007 congressional scorecard.[3] According to the conservative Heritage Foundation, Lowey consistently votes in support of the policies of the Democratic Party, and is seen as a strong and effective progressive voice in that legislative body.[4]

Her voting record on mass surveillance earned her a "D" on the Stand Against Spying Congressional Scorecard, which was created by a coalition of organizations and individuals from across the political spectrum advocating for transparency and an end to mass surveillance.[5]

Early in her Congressional career, Lowey sponsored an earmark for the purpose of "dredging the Mamaroneck Harbor."[6] According to the local newspaper, The Journal News, the dredging was proposed because "the harbor was becoming too shallow 'to accommodate the larger yachts.'"[6]

In 2001–2002, Lowey served as the first female chair of the Democratic Congressional Campaign Committee. She was a member of the House Appropriations Committee.

One of the notable causes she supports is the Corporation for Public Broadcasting, in support of which she appeared at a congressional hearing accompanied by Sesame Street characters Bert and Ernie.

In early 2009, Lowey introduced the Transportation Security Workforce Enhancement Act, which calls for collective bargaining rights for federal workers at the TSA and Department of Homeland Security.[8] However, some statements from the TSA dispute the necessity of collective bargaining.[9]

She was strongly critical of the Stupak-Pitts Amendment, which places limits on taxpayer-funded abortions in the context of the November 2009 Affordable Health Care for America Act. Because of the rancor and disruptions which marked so many of the so-called Town Hall meetings held in the summer of 2009 to discuss Health Care Reform, Lowey chose to present her point of view on Health Care Reform in a telephone conference call, the effectiveness of which was questioned by some of her constituents.[10] However, Lowey routinely appears around her district to talk one-on-one with her constituents at town fairs, events and public meetings.

Lowey has announced her opposition to the nuclear deal with Iran, stating that "In my judgment, sufficient safeguards are not in place to address the risks associated with the agreement. Relieving UN sanctions on conventional arms and ballistic missiles and releasing billions of dollars to the Iranian regime could lead to a dangerous regional weapons race and enable Iran to bolster its funding of terrorists. The deal does not explicitly require Iran to fully disclose its previous military work to the IAEA’s satisfaction before sanctions relief is provided, and inspectors will not have immediate access to the most suspicious facilities. There are no clear accountability measures regarding punishment for minor violations, which could encourage Iran to cheat."[11]

Like all Democratic members of Congress, Lowey was a superdelegate to the 2016 Democratic National Convention, pledged to support Hillary Clinton. Lowey's chief of staff, when asked by the New York Daily News whether Lowey might switch her support to candidate Bernie Sanders if Sanders were to win the New York State Democratic presidential primary, said “absolutely not... Hillary Clinton is Congresswoman Lowey’s friend, colleague and her constituent, and she is behind her 100%.”[12]

Nita Lowey has been married to Stephen Lowey for over 45 years. Stephen Lowey is a named partner in the law firm of Lowey Dannenberg Cohen & Hart, P.C., which is located in White Plains, NY. According to the West Corporation, his practice areas include Securities Law, Antitrust Law, and Consumer Protection. Nita and Stephen Lowey have three children, and eight grandchildren. The estimate of her personal asset wealth based on financial disclosures Congressional Representatives are required to provide (aside from that of personal residences and non-interest bearing bank accounts), puts Rep. Lowey's wealth at $41.2 million in 2010, based largely on her husband's investments.[13] This is derived from a special investigative series of asset wealth of all U.S. Congressional Representatives conducted by The Washington Post.[13]