CSX Corporation is an American holding company focused on real estate and railways in North America, among other industries. The company was formed in 1980 by the merger of Chessie System and Seaboard Coast Line Industries and eventually merged the various railroads owned by those predecessors into a single line that became known as CSX Transportation. CSX Corporation currently has a number of subsidiaries beyond CSX Transportation, including Fruit Growers Express, CSX Technology, CSX de Mexico, and CSX Real Property among others. Based in Richmond, Virginia, USA after the merger, in 2003 the CSX Corporation headquarters moved to Jacksonville, Florida. The chairman and CEO since 2003 is Michael J. Ward, while Clarence Gooden serves as president.[2] 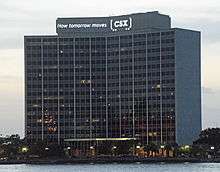 The CSX building, Jacksonville, FL, US, at night

The founding chairman of CSX Corporation was Prime F. Osborn III of Seaboard,[10] and the first CEO and second chairman was Hays T. Watkins Jr. of Chessie. Watkins was succeeded by John W. Snow as CEO in 1989 and as chairman in 1991. When Snow left the company in 2003 to become United States Secretary of the Treasury, Michael J. Ward, who then headed CSX Transportation, was promoted to succeed him. Overall in 2003, Ward took on the positions of chairman, president, and CEO.[1] When president Oscar Munoz left CSX in September 2015 after obtaining the role earlier that year from Ward, the company underwent several management changes, with Clarence Gooden appointed president.[11] As of 2015, the twelve-member CSX board of directors includes Ward and politicians such as Senator John B. Breaux.[12]

The following is a complete list of CSX chief executives as of November 2015:[2]