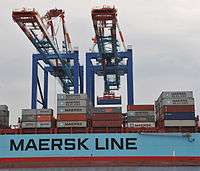 Containers being transferred to a cargo ship at container terminal of Bremerhaven.

Intermodal freight transport involves the transportation of freight in an intermodal container or vehicle, using multiple modes of transportation (rail, ship, and truck), without any handling of the freight itself when changing modes. The method reduces cargo handling, and so improves security, reduces damage and loss, and allows freight to be transported faster. Reduced costs over road trucking is the key benefit for inter-continental use. This may be offset by reduced timings for road transport over shorter distances. 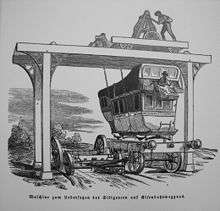 Stagecoach transferred to a rail car with a simple Portainer, an example of early intermodal freight transport by the French Mail, 1844. The drawing is exhibited in Deutsches Museum Verkehrszentrum, Munich, Germany.

Intermodal transportation goes back to the 18th century and predates the railways. Some of the earliest containers were those used for shipping coal on the Bridgewater Canal in England in the 1780s. Coal containers (called "loose boxes" or "tubs") were soon deployed on the early canals and railways and were used for road/rail transfers (road at the time meaning horse drawn vehicles).

Wooden coal containers used on railways go back to the 1830s on the Liverpool and Manchester Railway. In 1841 Isambard Kingdom Brunel introduced iron containers to move coal from the vale of Neath to Swansea Docks. By the outbreak of the First World War the Great Eastern Railway was using wooden containers to trans-ship passenger luggage between trains and sailings via the port of Harwich.

The early 1900s saw the first adoption of covered containers, primarily for the movement of furniture and intermodal freight between road and rail. A lack of standards limited the value of this service and this in turn drove standardisation. In the U.S. such containers, known as "lift vans", were in use from as early as 1911. 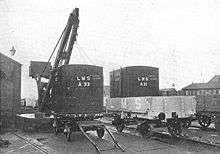 In the United Kingdom containers were first standardised by the Railway Clearing House (RCH) in the 1920s, allowing both railway owned and privately owned vehicles to be carried on standard container flats. By modern standards these containers were small, being 1.5 or 3.0 meters long (5 or 10 ft), normally wooden and with a curved roof and insufficient strength for stacking. From 1928 the London, Midland and Scottish Railway offered "door to door" intermodal road-rail services using these containers. This standard failed to become popular outside the United Kingdom.

Pallets made their first major appearance during World War II, when the United States military assembled freight on pallets, allowing fast transfer between warehouses, trucks, trains, ships, and aircraft. Because no freight handling was required, fewer personnel were needed and loading times were decreased.

Truck trailers were first carried by railway before World War II, an arrangement often called "piggyback", by the small Class I railroad, the Chicago Great Western in 1936. The Canadian Pacific Railway was a pioneer in piggyback transport, becoming the first major North American railway to introduce the service in 1952. In the United Kingdom the big four railway companies offered services using standard RCH containers that could be craned on and off the back of trucks. Moving companies such as Pickfords offered private services in the same way. 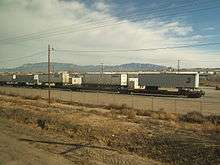 The White Pass and Yukon Route railway acquired the world's first container ship, the Clifford J. Rogers, built in 1955, and introduced containers to its railway in 1956. In the United Kingdom the modernisation plan and in turn the Beeching Report strongly pushed containerization. The British Railways freightliner service was launched carrying 8-foot (2.4 m) high pre-ISO containers. The older wooden containers and the pre-ISO containers were rapidly replaced by 10-foot (3.0 m) and 20-foot (6.1 m) ISO standard containers, and later by 40-foot (12 m) containers and larger.

In the U.S., starting in the 1960s, the use of containers increased steadily. Rail intermodal traffic tripled between 1980 and 2002, according to the Association of American Railroads (AAR), from 3.1 million trailers and containers to 9.3 million. Large investments were made in intermodal freight projects. An example was the USD $740,000,000 Port of Oakland intermodal rail facility begun in the late 1980s.[2][3]

Since 1984, a mechanism for intermodal shipping known as double-stack rail transport has become increasingly common. Rising to the rate of nearly 70% of the United States' intermodal shipments, it transports more than one million containers per year. The double-stack rail cars design significantly reduces damage in transit and provides greater cargo security by cradling the lower containers so their doors cannot be opened. A succession of large, new, domestic container sizes was introduced to increase shipping productivity. In Europe, the more restricted loading gauge has limited the adoption of double-stack cars. However, in 2007 the Betuweroute was completed, a railway from Rotterdam to the German industrial heartland, which may accommodate double-stacked containers in the future. Other countries, like New Zealand, have numerous low tunnels and bridges that limit expansion for economic reasons.

Intermodal ship-to-rail transfer of containerized cargos at the Port in Long Beach, California.

In countries where the railway loading gauge is sufficient, truck trailers are often carried by rail. Variations exist, including open-topped versions covered by a fabric curtain are used to transport larger loads. A container called a tanktainer, with a tank inside a standard container frame, carries liquids. Refrigerated containers (reefer) are used for perishables. Swap body units have the same bottom corners as intermodal containers but are not strong enough to be stacked. They have folding legs under their frame and can be moved between trucks without using a crane.

Handling equipment can be designed with intermodality in mind, assisting with transferring containers between rail, road and sea. These can include:

According to the European Commission Transportation Department “it has been estimated that up to 25% of accidents involving trucks can be attributable to inadequate cargo securing”.[7] Cargo that is improperly secured can cause severe accidents and lead to the loss of cargo, the loss of lives, the loss of vehicles, ships and airplane; not to mention the environmental hazards it can cause. There are many different ways and materials available to stabilize and secure cargo in containers used in the various modes of transportation. Conventional Load Securing methods and materials such as steel banding and wood blocking & bracing have been around for decades and are still widely used. In the last few years the use of several, relatively new and unknown Load Securing methods have become available through innovation and technological advancement including polyester strapping and -lashing, synthetic webbings and Dunnage Bags, also known as air bags.

Container ships are used to transport containers by sea. These vessels are custom-built to hold containers. Some vessels can hold thousands of containers. Their capacity is often measured in TEU or FEU. These initials stand for "twenty-foot equivalent unit," and "forty-foot equivalent unit," respectively. For example, a vessel that can hold 1,000 40-foot containers or 2,000 20-foot containers can be said to have a capacity of 2,000 TEU. After the year 2006, the largest container ships in regular operation are capable of carrying in excess of 15,000 TEU.[8][9]

Onboard ships they are typically stacked up to seven units high. 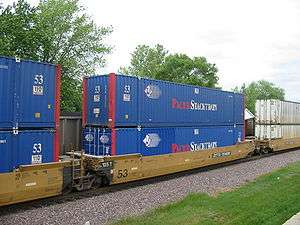 A portion of a "double stack" container train operated by Union Pacific Railroad, the containers are owned by Pacer Stacktrain, the cars by TTX. 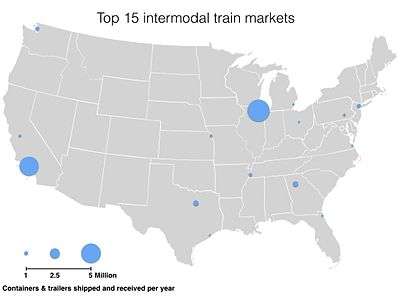 In North America, containers are often shipped by rail in container well cars. These cars resemble flatcars but the newer ones have a container-sized depression, or well, in the middle (between the bogies or "trucks") of the car. This depression allows for sufficient clearance to allow two containers to be loaded in the car in a "double stack" arrangement. The newer container cars also are specifically built as a small articulated "unit", most commonly in components of three or five, whereby two components are connected by a single bogie as opposed to two bogies, one on each car. Double stacking is also used in parts of Australia. On some older railways, particularly in the United Kingdom, the use of well cars is necessary to carry single stacked large containers within the loading gauge.

It is also common in North America to transport semi-trailers on railway flatcars or spine cars, an arrangement called "piggyback" or TOFC (trailer on flatcar) to distinguish it from container on flatcar (COFC). Some flatcars are designed with collapsable trailer hitches so they can be used for trailer or container service.[13] Such designs allow trailers to be rolled on from one end, though lifting trailers on and off flatcars by specialized loaders is more common. TOFC terminals typically have large areas for storing trailers pending loading or pickup.[14]

If the rail line has been built with sufficient vertical clearance then Double-stack rail transport can be used. Where lines are electrified with overhead electric wiring double stacking is normally not possible. The mandatory requirement to fit under overhead wire for the traction engine electrical power supply sets the height limit for the railcars to allow for trailer transport. This requires a certain low building height which led to a minor size of wheels for the railcars. Hence increased degradation of bogeys by wheel wear-out is a cost disadvantage for the system.

When carried by rail, containers can be loaded on flatcars or in container well cars. In Europe, stricter railway height restrictions (smaller loading gauge and structure gauge) and overhead electrification prevent containers from being stacked two high, and containers are hauled one high either on standard flatcars or other railroad cars. Taller containers are often carried in well cars (not stacked) on older European railway routes where the loading gauge (especially with the reduced gauge for UK lines) is particularly small. 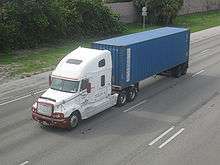 A truck transporting a container on Interstate 95 in South Florida.

Trucking is frequently used to connect the "linehaul" ocean and rail segments of a global intermodal freight movement. This specialized trucking that runs between ocean ports, rail terminals, and inland shipping docks, is often called drayage, and is typically provided by dedicated drayage companies or by the railroads.[15]

Barges utilising ro-ro and container-stacking techniques transport freight on large inland waterways such as the Rhine/Danube in Europe and the Mississippi River in the U.S.[5] 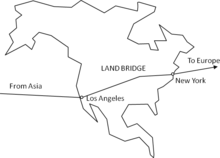 Image of a land bridge.

The term landbridge or land bridge is commonly used in the intermodal freight transport sector in reference to a containerized ocean freight shipment that travels across a large body of land for a significant part of the trip, en route to its final destination; Of which the land portion of the trip is referred to as the "land bridge" and the mode of transport used is rail transport. There are three applications for the term.

Generally modern, bigger planes usually carry cargo in the containers. Sometimes even the checked luggage is first placed into containers, and then loaded onto the plane.[18] Of course because of the requirement for the lowest weight possible (and very important, little difference in the viable mass point), and low space, specially designed containers made from lightweight material are often used. Due to price and size, this is rarely seen on the roads or in ports. However, large transport aircraft make it possible to even load standard container(s), or use standard sized containers made of much lighter materials like titanium or aluminium.

Pipelines are part of the intermodal freight transportation network as they are the preferred mode of transporting gas and liquids. Often unrecognized by the general public due to their placement underground, pipelines contribute to freight transport and are critical to the economy. Compared to trucks and trains, pipelines are less damaging to the environment, less susceptible to theft and more economical, safe, convenient and reliable. According to the American Association of Oil Pipelines,[19] of a total oil transport of 6,400 Billion Board Miles (BBM), rail accounts for 2%, trucks 3%, water carriers 27% and pipelines 68% of all transport. In addition to oil, gas, liquid fertilizers, liquefied natural gas, and carbon dioxide are also transported by pipeline.