FedEx Corporation is a US multinational courier delivery services company headquartered in Memphis, Tennessee.[2] The name "FedEx" is a syllabic abbreviation of the name of the company's original air division, Federal Express, which was used from 1973 until 2000. The company is known for its overnight shipping service, but also for pioneering a system that could track packages and provide real-time updates on package location (to help in finding lost packages), a feature that has now been implemented by most other carrier services.[3]

For the history of Federal Express, see FedEx Express. 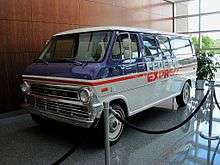 FedEx Corporation is an import/export company, incorporated October 2, 1997 in Delaware.[4] FDX Corporation was founded in January 1998 with the acquisition of Caliber System Inc. by Federal Express. With the purchase of Caliber, FedEx started offering other services besides express shipping. Caliber subsidiaries included RPS, a small-package ground service; Roberts Express, an expedited shipping provider; Viking Freight, a regional, less than truckload freight carrier serving the Western United States; Caribbean Transportation Services, a provider of airfreight forwarding between the United States and the Caribbean; and Caliber Logistics and Caliber Technology, providers of logistics and technology solutions. FDX Corporation was founded to oversee all of the operations of those companies and its original air division, Federal Express.[5]

In the 1990s, FedEx Ground planned, but later abandoned, a joint service with British Airways to have BA fly a Concorde supersonic jet airliner to Shannon, Ireland with FedEx packages on board, and then FedEx would have flown the packages subsonically to their delivery points in Europe. Ron Ponder, a vice president at the time, was in charge of this proposed venture.

FedEx Corp. acquired privately held Kinko's, Inc. in February 2004 and rebranded it FedEx Kinko's. The acquisition was made to expand FedEx's retail access to the general public. After the acquisition, all FedEx Kinko's locations exclusively offered only FedEx shipping.[5] In June 2008, FedEx announced that they would be dropping the Kinko's name from their ship centers; FedEx Kinko's would now be called FedEx Office.[6][7] In September 2004, FedEx acquired Parcel Direct, a parcel consolidator, and re-branded it FedEx SmartPost.[5]

In December 2007, the U.S. Internal Revenue Service "tentatively decided" the FedEx Ground Division might be facing a tax liability of $319 million for 2002, due to misclassification of its operatives as independent contractors. Reversing a 1994 decision which allowed FedEx to classify its operatives that own their own vehicles as independent contractors, the IRS audited the years 2003 to 2006, with a view to assessing whether similar misclassification of operatives had taken place. FedEx denied that any irregularities in classification had occurred, but faced legal action from operatives claiming benefits that would have accrued had they been classified as employees.[8]

In June 2009, FedEx began a campaign against United Parcel Service (UPS) and the Teamsters union, accusing its competitor of receiving a bailout in an advertising campaign called "Brown Bailout". FedEx claimed that signing the Federal Aviation Administration re-authorization bill, which would let some of its workers unionize more easily (and, according to the Memphis-based company, "could expose [its] customers at any time to local work stoppages that interrupted the flow of their time-sensitive, high-value shipments”),[9] was equivalent to giving UPS a "bailout". Independent observers heavily criticized FedEx's wording,[9] claiming that it was "an abuse of the term".[9] FedEx Express employees are regulated under the Railway Labor Act.[10]

On January 14, 2013, FedEx named Henry Maier CEO and President of FedEx Ground, to take effect after David Rebholz retired on May 31, 2013.[11] On July 17, 2014, FedEx was indicted for conspiracy to distribute controlled substances in cooperation with the Chhabra-Smoley Organization and Superior Drugs.[12] According to the U.S. Department of Justice, "FedEx is alleged to have knowingly and intentionally conspired to distribute controlled substances and prescription drugs, including Phendimetrazine (Schedule III); Ambien, Phentermine, Diazepam, and Alprazolam (Schedule IV), to customers who had no legitimate medical need for them based on invalid prescriptions issued by doctors who were acting outside the usual course of professional practice."[13] A representative for the company contested these claims, stating that it would violate personal rights of customers to deny service and that "We are a transportation company — we are not law enforcement".[14] On July 17, 2016 the The DOJ U.S. Attorney's Office confirmed in a statement that it had asked U.S. District Court Judge Charles Breyer to dismiss the indictment but also did not say why.[15][16][17]

FedEx is organized into operating units, each of which has its own version of the wordmark designed in 1994 by Lindon Leader of Landor Associates, of San Francisco.[20] The Fed is always purple and the Ex is in a different color for each division and platinum for the overall corporation use. The original FedEx logo had the Ex in orange; it is now used as the FedEx Express wordmark. The FedEx wordmark is notable for containing a subliminal right-pointing arrow in the negative space between the "E" and the "X", which was achieved by designing a proprietary font, based on Univers and Futura, to emphasize the arrow shape.[20] In August, 2016 FedEx announced that all operating units will switch over to the purple and orange color logo over the next 5 years. 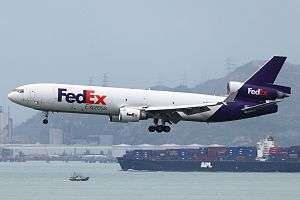 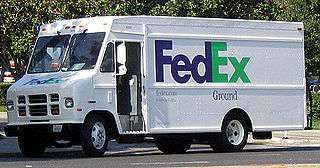 FedEx SameDay City allows a between: Standard, providing pickup by noon and delivery by the end of the day, or Priority, providing delivery within 2 hours.FedEx SameDay City is currently expanding in all major cities across the country and is planning on becoming its own operating unit in the next five years.

The Standard Carrier Alpha Code (SCAC) is a unique code used to identify transportation companies. It is typically two to four alphabetic letters long. It was developed by the National Motor Freight Traffic Association in the 1960s to help the transportation industry for computerizing data and records. FedEx's codes include:

According to the Center for Responsive Politics, FedEx Corp is the 21st largest campaign contributor in the United States. The company has donated over $21 million since 1990, 45% of which went to Democrats and 55% to Republicans. Strong ties to the White House and members of Congress allow access to international trade and tax cut rebates as well as the rules of the business practices of the United States Postal Service. In 2001, FedEx sealed a $9 billion deal with the USPS to transport all of the post office's overnight and express deliveries.[28]

The firm was named by Fortune magazine as one of the top 100 companies to work for in 2013, citing the company's choice to downsize with voluntary buyouts rather than involuntary layoffs.[33]

In 1981, their advertising firm Ally & Gargano hired performer John Moschitta, Jr., known for his fast speech delivery, to do an ad for Federal Express titled "Fast Paced World". This single commercial would be cited years later by New York as one of the most memorable ads ever.[35] 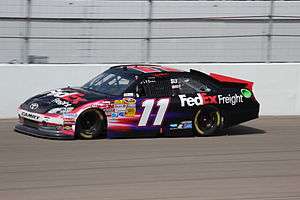 Denny Hamlin driving the FedEx-sponsored No. 11 car at the 2012 Kobalt Tools 400