"Campione" redirects here. For the football song, see Campione 2000. For the light novel series and manga and anime, see Campione!

Campione d'Italia is an Italian comune (municipality) of the Province of Como in the Lombardy region, and an Italian exclave within the Swiss canton of Ticino, separated from the rest of Italy by mountains. At its closest, the enclave is less than one kilometre (0.6 mi) from the rest of Italy, but the hilly terrain requires a journey by road of over 14 km (9 mi) to reach the nearest Italian town, Lanzo d'Intelvi, and over 28 km (17 mi) to reach the city of Como. 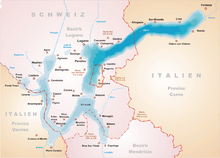 Map showing the location of the Campione enclave near the center.

In the first century BC the Romans founded the garrison town of Campilonum to protect their territories from Helvetii invasions.[2]

In 777, Toto of Campione, a local Lombard lord, left his inheritance to the archbishopric of Milan. Ownership was transferred to the abbey of Sant’Ambrogio. In 1512, the surrounding area of Ticino was transferred from the ownership of the bishop of Como to Switzerland by Pope Julius II, as thanks for support in the War of the Holy League. However, the abbey maintained control over what is now Campione d'Italia and some territory on the western bank of Lake Lugano.[2]

When Ticino chose to become part of the Swiss Confederation in 1798, the people of Campione chose to remain part of Lombardy. In 1800, Ticino proposed exchanging Indemini for Campione. In 1814 a referendum was held, but the residents of Campione were against it. In 1848, during the wars of Italian unification, Campione petitioned Switzerland for annexation, but this was rejected due to the Swiss desire to maintain neutrality.[2]

After Italian unification in 1861, all land west of Lake Lugano and half of the lake were given to Switzerland so that Swiss trade and transport would not have to pass through Italy. The d'Italia was added to the name of Campione in the 1930s by Prime Minister Benito Mussolini and an ornamental gate to the city was built, both in an attempt to assert the exclave's Italian-ness.[2]

During World War II, the US Office of Strategic Services (OSS – the precursor to the CIA) maintained a unit in Campione and used it for operations into Italy.[3] At the time the pro-Nazi Italian regime did not have control over the exclave. The Swiss turned a blind eye to the situation as long as the Americans kept a low profile. Separate stamps were issued during this period inscribed "Campione d'Italia" and valued in the Swiss currency.[4]

Campione has a considerable amount of economic and administrative integration with Switzerland. Because of its particular status, legal tender in the town is the Swiss franc,[5] but the euro is widely accepted; Italian citizens residing in Campione must abide by Swiss law regarding customs duties. Vehicle registration plates are not Italian, but Swiss; similarly, the telephone system is almost entirely operated by Swisscom, so that calls from Italy and all other countries outside Switzerland (with very few exceptions such as calling the city hall) require the international dialing code for Switzerland (+41) and the Ticino area code (91). Mail may be sent using either a Swiss postal code or an Italian one using Switzerland or Italy as destination country respectively.

Pursuant to bilateral agreements, Italians residing in Campione also benefit from many services and facilities located in Swiss territory, such as hospital care, that would otherwise be available only to Swiss residents.[6]

Like the Italian town of Livigno, it is exempt from EU VAT. Campione takes advantage of its status by operating a casino, the Casinò di Campione, as gambling laws are less strict than in either Italy or Switzerland (also a legacy of the pre-World War II era).

Security is provided by the Carabinieri (Italian military police) and the city also has a Polizia Locale group. However, firefighters and ambulances are Swiss.[7]