In Italy, a province (provincia) is an administrative division of intermediate level between a municipality (comune) and a region (regione).

The new law which transforms the provinces is preliminary to their abolition, as a revision of the second part of the Italian Constitution is needed in order to change the current bicameral parliamentary system and to abolish.[2] 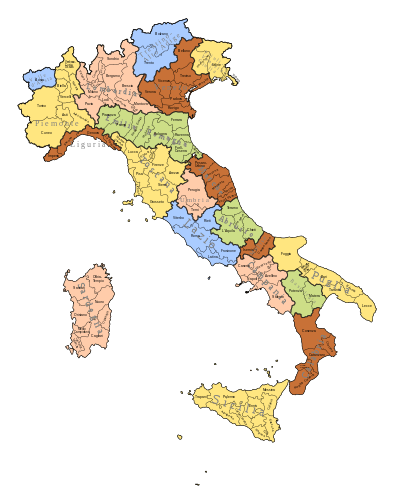 Provinces of Italy in 2012, within related regions

A province of the Italian Republic is composed of many municipalities (comune). Usually several provinces together form a region; the region of Aosta Valley is the sole exception – it is not subdivided into provinces, and provincial functions are exercised by the region.

The three main functions devolved to provinces are:

The number of provinces in Italy has been steadily growing in recent years, as many new ones are carved out of older ones. Usually, the province's name is the same as that of its capital city.

According to the 2014 reform, each province is headed by a President assisted by a legislative body, the Provincial Council, and an executive body, the Provincial Executive. President and members of Council are elected together by mayors and city councilors of each municipality of the province. The Executive is chaired by the President who appoint others members, called assessori. Since 2015 the President and others members of the Council will not receive a salary.[3]

In each province there is also a Prefect (prefetto), a representative of the central government who heads an agency called prefettura-ufficio territoriale del governo. The Questor (questore) is the head of State's Police (Polizia di Stato) in the province and his office is called questura. There is also a province's police force depending from local government, called provincial police (polizia provinciale).

The Alto Adige and Trentino are autonomous provinces: unlike all other provinces they have the same legislative powers as regions and are not subordinated to the region they are part of, namely the region of Trentino-Alto Adige/Südtirol.

In 1861, at the birth of the Kingdom of Italy, there were 59 provinces. However, at that time the national territory was smaller than the current one: regions of Veneto, Friuli-Venezia Giulia, Trentino Alto Adige and Lazio were not included in the kingdom.

In 1866, following the Third Independence War, territories of Veneto, Friuli and Mantua were annexed. There were therefore nine more provinces: Belluno, Mantua, Padua, Rovigo, Treviso, Venice, Verona, Vicenza and Udine, all previously part of the Austrian Empire. Eventually, in 1870, following the annexion of Rome and its province from the Papal States, the provinces rose in number to 69.

After the First World War, new territories were annexed to Italy. The Province of Trento was created in 1920. Provinces of La Spezia, Trieste and Ionio in 1923. In 1924 the new provinces of Fiume, Pola, and Zara were created, increasing the total number of provinces in Italy to 76.

Between the two World Wars 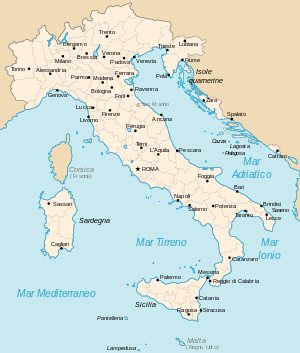 Following the annexion of Yugoslavia in 1941, the Province of Zara was enlarged and joined the Governatorate of Dalmatia (comprising the provinces of Zara, Spalato, and Cattaro), while in the occupied central part of the present-day Slovenia the new Province of Ljubljana was created. This lasted only until 1945, when Yugoslavia was recreated.

In 1945, after World War II, the province of Aosta changed its name to Valle d'Aosta and Littoria to Latina; the new province of Caserta was created. With the Paris Treaties, signed on 10 February 1947, Italy lost the provinces in the regions of Istria, Carnaro and Dalmazia and part of the provinces of Trieste and Gorizia. Moreover, the province of Trieste was occupied by United States and British forces. The Italian Republic therefore had 91 provinces at its birth.

The Province of Pordenone was created in 1968, the province of Isernia in 1970, and the Province of Oristano in 1974. In a reorganization in 1992 eight provinces were created: Verbano-Cusio-Ossola, Biella, Lecco, Lodi, Rimini, Prato, Crotone, and Vibo Valentia, while Forlì was renamed as Forlì-Cesena.

In May 2012, a referendum abolished the eight provinces of Sardinia, and this suppression was to take effect on 1 March 2013. On 6 July 2012, new plans were published to reduce the number of provinces by around half.[6] In January 2014 the Sardinian Regional Administrative Court declared "unconstitutional" the abolition of the Sardinian provinces, which occurred in 2013.

Provinces of Istria and Dalmatia

Number of provinces in Italy since 1861 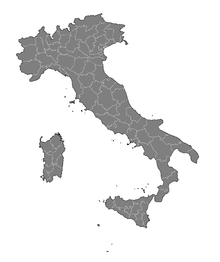 Italian Provinces, after reform of Mario Monti's Government (the map does not include the updates of abolition of the provinces in Regions of Sicily and Sardinia).

Provinces are often deemed useless, and many proposals have been made in recent years to eliminate them.[9][10][11] However, the difficulty of changing a constitutional law and the opposition of some groups and politicians halted any reform proposal.[12][13] During his speech to the Chamber of Deputies, newly appointed Prime Minister Enrico Letta announced that a revision of the second part of the Italian Constitution is needed, in order to change the current bicameral parliamentary system and to abolish provinces.