This article is about the building in Palermo (Italy). For the monument in Aachen, see Palatine Chapel, Aachen. 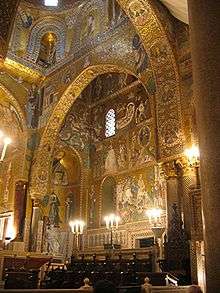 The Palatine Chapel (Italian: Cappella Palatina), is the royal chapel of the Norman kings of Sicily situated on the ground floor at the center of the Palazzo Reale in Palermo, southern Italy.

Also referred to as a Palace church or Palace chapel,[1] it was commissioned by Roger II of Sicily in 1132 to be built upon an older chapel (now the crypt) constructed around 1080. It took eight years to build, receiving a royal charter the same year, with the mosaics being only partially finished by 1143.[1] The sanctuary, dedicated to Saint Peter, is reminiscent of a domed basilica. It has three apses, as is usual in Byzantine architecture, with six pointed arches (three on each side of the central nave) resting on recycled classical columns. 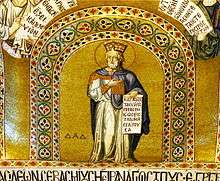 mosaic in the Palatine Chapel

The mosaics of the Palatine Chapel are of unparalleled elegance as concerns elongated proportions and streaming draperies of figures. They are also noted for subtle modulations of colour and luminance. The oldest are probably those covering the ceiling, the drum, and the dome. The shimmering mosaics of the transept, presumably dating from the 1140s and attributed to Byzantine artists, with an illustrated scene, along the north wall, of St. John in the desert and a landscape of Agnus Dei.[2] Below this are five saints, the Greek fathers of the church, St. Gregory of Nissa, St. Gregory the Theologian, St. Basil, St. John Chrysostom and St. Nicholas.[2] The three central figures, St. Gregory, St. Basil, St. John Chrysostom, allude to the Orthodox cult known as the Three Hierarchs, which originated fifty years earlier.[2] Every composition is set within an ornamental frame, not dissimilar to that used in contemporaneous mosaic icons. 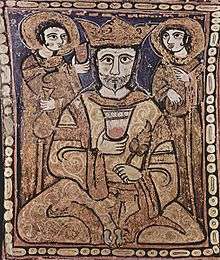 Roger II of Sicily depicted on the muqarnas ceiling in an Arabic style.

The rest of the mosaics, dated to the 1160s or the 1170s, is executed in a cruder manner and feature Latin (rather than Greek) inscriptions. Probably a work of local craftsmen, these pieces are more narrative and illustrative than transcendental. A few mosaics have a secular character and represent oriental flora and fauna. This may be the only substantial passage of secular Byzantine mosaic extant today. 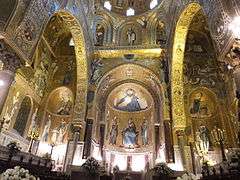 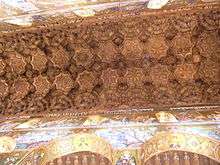 The chapel combines harmoniously a variety of styles: the Norman architecture and door decor, the Arabic arches and script adorning the roof, the Byzantine dome and mosaics. For instance, clusters of four eight-pointed stars, typical for Muslim design, are arranged on the ceiling so as to form a Christian cross.

Other remarkable features of the chapel include the muqarnas ceiling, which is spectacular. The hundreds of facets were painted, notably with many purely ornamental vegetal and zoomorphic designs but also with scenes of daily life and many subjects that have not yet been explained. Stylistically influenced by Iraqi 'Abbasid art, these paintings are innovative in their more spatially aware representation of personages and of animals.

The chapel has been considered a union of a Byzantine church sanctuary and a Western basilica nave.[3] The sanctuary, is of an "Eastern" artistic nature, while the nave reflects "Western" influences.[3]

The nave, constructed under Roger II, did not contain any Christian images.[4] These were added later by Roger II's successors, William I and William II.[4] The nave's ceiling consists of Greek, Latin and inscriptions.[3]

The frame for the royal throne sets against the west wall of the nave.[5] There are six steps leading up to where the throne would be, along with two heraldic lions in two roundels upon the spandrels over the throne frame gabel.[5]

As an expression of Norman culture, St. Dionysius and St. Martin are represented in the sanctuary.[6] Mosaics are of Byzantine culture in their composition and subjects.[7] The apex of the dome consists of the Pantokrator, with rows of angels, prophets, evangelists and saints.[7] The Byzantine motif ends abruptly with scenes from Christ's life along the south wall of the southern transept arm, while the north wall consists of warrior saints.[7]