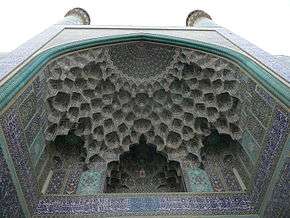 Decorative muqarnas vaulting in the iwan entrance to the Shah Mosque in Isfahan, Iran

Muqarnas (Arabic: مقرنص‎‎; Persian: مقرنس‎‎) is a form of architectural ornamented vaulting, the "geometric subdivision of a squinch, or cupola, or corbel, into a large number of miniature squinches, producing a sort of cellular structure", sometimes also called a "honeycomb" vault.[1] It is used for domes, and especially half-domes in entrances, iwans and apses, mostly in traditional Islamic and Persian architecture. Where some elements project downwards, the style may be called mocárabe;[1][2] these are reminiscent of stalactites, and are sometimes called "stalactite vaults".

Muqarnas developed around the middle of the 10th century in northeastern Iran and almost simultaneously — but apparently independently — in central North Africa. Examples can be found in the Alhambra in Granada, Spain, the Abbasid Palace in Baghdad, Iraq, and the mausoleum of Sultan Qaitbay, Cairo, Egypt.[2] Large rectangular roofs in wood with muqarnas-style decoration adorn the 12th century Cappella Palatina in Palermo, Sicily, and other important buildings in Norman Sicily. Muqarnas is also found in Armenian architecture.

High-resolution detail from the Alhambra, showing horizontal courses; the clearer one zigzags across at about 1/3 of the way down.

Medieval architect's plan of two muqarnas vaults, from the Topkapı Scroll; more plans from the scroll.

Muqarnas is typically applied to the undersides of domes, pendentives, cornices, squinches, arches and vaults.[2] Muqarnas is a downward-facing shape; that is, a vertical line can be traced from the floor to any point on a muqarnas surface. It is also arranged in horizontal courses, as in a corbelled vault, with the horizontal joint surface having a different shape at each level.[3][4] The edges of these surfaces can all be traced on a single plan view; architects can thus plan out muqarnas geometrically, as the image illustrates.[5][6] See these diagrams for clarity. 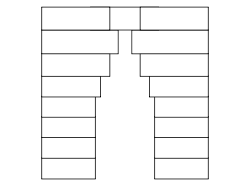 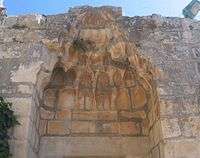 Corbelled vault carved into muqarnas (method of suspension for pendant points, one of which is missing, not clear).

Muqarnas does not have a significant structural role. Muqarnas need not be carved into the structural blocks of a corbelled vault; it can be hung from a structural roof as a purely decorative surface.[7][8] Muqarnas may be made of brick, stone, stucco, or wood, and clad with tiles or plaster.[2] The individual cells may be called alveoles.[1]

Some modern muqarnas elements have been designed, if not built, with upwards-facing cells;[8] see also the Indian capitals above.