For information on the Christian symbol, see Christian cross. For other uses, see Cross (disambiguation).

A Greek cross (all arms of equal length) above a saltire, a cross whose limbs are slanted

A cross is a geometrical figure consisting of two intersecting lines or bars, usually perpendicular to each other. The lines usually run vertically and horizontally. A cross of oblique lines, in the shape of the Latin letter X, is also termed a saltire in heraldic terminology.

The word cross is recorded in 10th-century Old English as cros, exclusively for the instrument of Christ's crucifixion, replacing the native Old English word rood. The word's history is complicated, it appears to have entered English from Old Irish, possibly via Old Norse, ultimately from the Latin crux (or its accusative crucem and its genitive crucis), "stake, cross". The English verb to cross arises from the noun c. 1200, first in the sense "to make the sign of the cross"; the generic meaning "to intersect" develops in the 15th century. The Latin word was, however, influenced by popular etymology by a native Germanic word reconstructed as*krukjo (English crook, Old English crycce, Old Norse krokr, Old High German krucka). This word, by conflation with Latin crux, gave rise to Old French crocier (modern French crosse), the term for a shepherd's crook, adopted in English as crosier.

Latin crux referred to the gibbet where criminals were executed, a stake or pole, but not necessarily to intersecting or "cruciform" beams. The Latin word derived from the verb crucio "to torture" (c.f. English excruciate).[1] Latin crux originally referred to the tree or stake on which criminals were crucified in the pre-imperial period. This was later specified as crux acuta or crux simplex. The method of execution may have been adopted from the Phoenicians.[2] The addition of a transverse bar, to which the criminal would be fastened with nails or cords, dates to a later period. The Latin name of the diagonal cross is crux decussata (as it were "ten-like cross", after the Roman numeral); the heraldic term saltire (meaning "stirrup") is introduced only towards the end of the medieval period.

The Greek equivalent of Latin crux "stake, gibbet" is σταυρός stauros "stake, pole". The letter Tau (T) was associated with the stauros or crux, while the notion of "cruciform" shapes, i.e. intersecting lines, were associated with the letter Chi (X). The Greek term for "crossing" ("intersection") was χίασμα chiasma, from a verb χιάζω chiázō "to shape like the letter Chi". Latin had the comparable decussatus "shaped like the numeral ten" (c.f. English decussate).

Bronze Age "wheel pendants" in the shape of the "sun cross" (Urnfield culture, 2nd millennium BC).

Due to the simplicity of the design (two intersecting lines), cross-shaped incisions make their appearance from deep prehistory; as petroglyphs in European cult caves, dating back to the beginning of the Upper Paleolithic, and throughout prehistory to the Iron Age. Also of prehistoric age are numerous variants of the simple cross mark, including the crux gammata with curving or angular lines, and the Egyptian crux ansata with a loop.

Speculation has associated the cross symbol - even in the prehistoric period - with astronomical or cosmological symbology involving "four elements" (Chevalier, 1997) or the cardinal points, or the unity of a vertical axis mundi or celestial pole with the horizontal world (Koch, 1955). Speculation of this kind became especially popular in the mid- to late-19th century in the context of comparative mythology seeking to tie Christian mythology to ancient cosmological myths. Influential works in this vein included G. de Mortillet (1866),[3] L. Müller (1865),[4] W. W. Blake (1888),[5] Ansault (1891),[6] etc. 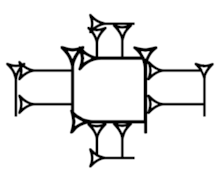 Archaic cuneiform character LAK-617: a cruciform arrangement of five boxes; scribes could use the central, larger box as container for other characters.

In the European Bronze Age the cross symbol appeared to carry a religious meaning, perhaps as a symbol of consecration, especially pertaining to burial.[7]

The cross sign occurs trivially in tally marks, and develops into a number symbol independently in the Roman numerals (X "ten"), the Chinese rod numerals (十 "ten") and the Brahmi numerals ("four", whence the numeral 4).

According to W. E. Vine's Expository Dictionary of New Testament Words, worshippers of Tammuz in Chaldea and thereabouts used the cross as symbol of that god.[9][10]

Early use of a globus cruciger on a solidus minted by Leontios (r. 695–698); on the obverse, a stepped cross in the shape of a Iota Eta monogram.

The shape of the cross (crux, stauros "stake, gibbet"), as represented by the letter T, came to be used as a "seal" or symbol of Early Christianity by the 2nd century.[11] Clement of Alexandria in the early 3rd century calls it τὸ κυριακὸν σημεῖον ("the Lord's sign") he repeats the idea, current as early as the Epistle of Barnabas, that the number 318 (in Greek numerals, ΤΙΗ) in Genesis 14:14 was a foreshadowing (a "type") of the cross (the letter Tau) and of Jesus (the letters Iota Eta).[12] Clement's contemporary Tertullian rejects the accusation that Christians are crucis religiosi (i.e. "adorers of the gibbet"), and returns the accusation by likening the worship of pagan idols to the worship of poles or stakes.[13] In his book De Corona, written in 204, Tertullian tells how it was already a tradition for Christians to trace repeatedly on their foreheads the sign of the cross.[14]

While early Christians used the T-shape to represent the cross in writing and gesture, the use of the Greek cross and Latin cross, i.e. crosses with intersecting beams, appears in Christian art towards the end of Late Antiquity. An early example of the cruciform halo, used to identify Christ in paintings, is found in the Miracles of the Loaves and Fishes mosaic of Sant'Apollinare Nuovo, Ravenna (6th century). The Patriarchal cross, a Latin cross with an additional horizontal bar, first appears in the 10th century. A wide variation of cross symbols is introduced for the purposes of heraldry beginning in the age of the Crusades.[15]

The cross mark is used to mark a position, or as a check mark, but also to mark deletion. Derived from Greek Chi are the Latin letter X, Cyrillic Kha and possibly runic Gyfu.

Sumerian cuneiform had a simple cross-shaped character, consisting of a horizontal and a vertical wedge (𒈦), read as maš "tax, yield, interest"; the superposition of two diagonal wedges results in a decussate cross (𒉽), read as pap "first, pre-eminent" (the superposition of these two types of crosses results in the eight-pointed star used as the sign for "sky" or "deity" (𒀭), DINGIR). The cuneiform script has other, more complex, cruciform characters, consisting of an arrangement of boxes or the fourfold arrangement of other characters, including the archaic cuneiform characters LAK-210, LAK-276, LAK-278, LAK-617 and the classical sign EZEN (𒂡).[16]

Phoenician tāw is still cross-shaped in Paleo-Hebrew alphabet and in some Old Italic scripts (Raetic and Lepontic), and its descendant T becomes again cross-shaped in the Latin minuscule t. The plus sign (+) is derived from Latin t via a simplification of a ligature for et "and" (introduced by Johannes Widmann in the late 15th century).

The letter Aleph is cross-shaped in Aramaic and paleo-Hebrew.

Other, unrelated cross-shaped letters include Brahmi ka (predecessor of the Devanagari letter क) and Old Turkic (Orkhon) d² and Old Hungarian b, and Katakana ナ na and メme.

The multiplication sign (×), often attributed to William Oughtred (who first used it in an appendix to the 1618 edition of John Napier's Descriptio) apparently had been in occasional use since the mid 16th century.[17]

Other typographical symbols resembling crosses include the dagger or obelus (†), the Chinese (十, Kangxi radical 24) and Roman (X) ten.

The following is a list of cross symbols, except for variants of the Christian cross and Heraldic crosses, for which see the dedicated lists at Christian cross variants and Crosses in heraldry, respectively.

As a design element

Cross shapes are made by a variety of physical gestures. Crossing the fingers of one hand is a common invocation of the symbol. The sign of the cross associated with Christian genuflection is made with one hand: in Eastern Orthodox tradition the sequence is head-heart-right shoulder-left shoulder, while in Oriental Orthodox, Catholic and Anglican tradition the sequence is head-heart-left-right.

Crossing the index fingers of both hands represents and a charm against evil in European folklore. Other gestures involving more than one hand include the "cross my heart" movement associated with making a promise and the Tau shape of the referee's "time out" hand signal.