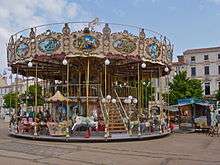 A carousel (American English: from French carrousel and Italian carosello), roundabout (British English),[1] or merry-go-round, is an amusement ride consisting of a rotating circular platform with seats for riders. The "seats" are traditionally in the form of rows of wooden horses or other animals mounted on posts, many of which are moved up and down by gears to simulate galloping, to the accompaniment of looped circus music. This leads to one of the alternative American names, the galloper. Other popular names are jumper, horseabout and flying horses.

Carousels are commonly populated with horses, each horse weighing roughly 100 lbs (45 kg), but may include a variety of mounts,[2] for example pigs, zebras, tigers or mythological creatures such as dragons or unicorns. Sometimes, chairlike or bench like seats are used and occasionally mounts can be shaped like aeroplanes or cars.

The "roundabouts" or "merry-go-rounds" installed in playgrounds are usually somewhat different devices: simple, child-powered rotating platforms with bars or handles to which children can cling while riding. 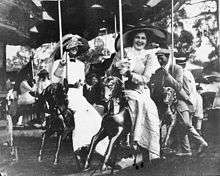 Australian racegoers enjoy a merry-go-round at the Deepwater Races, c. 1910.

The modern carousel emerged from early jousting traditions in Europe and the Middle East. Knights would gallop in a circle while tossing balls from one to another; an activity that required great skill and horsemanship. This game was introduced to Europe at the time of the Crusades from earlier Byzantine and Arab traditions. The word carousel originated from the Italian garosello and Spanish carosella ("little battle", used by crusaders to describe a combat preparation exercise and game played by Turkish and Arabian horsemen in the 12th century).[3] This early device was essentially a cavalry training mechanism; it prepared and strengthened the riders for actual combat as they wielded their swords at the mock enemies.

By the 17th century, the balls had been dispensed with, and instead the riders had to spear small rings that were hanging from poles overhead and rip them off. Cavalry spectacles that replaced medieval jousting, such as the ring-tilt, were popular in Italy and France. The game began to be played by commoners, and carousels soon sprung up at fairgrounds across Europe. At the Place du Carrousel in Paris, an early make believe carousel was set up with wooden horses for the children.[4]

By the early 18th century carousels were being built and operated at various fairs and gatherings in central Europe and England. Animals and mechanisms would be crafted during the winter months and the family and workers would go touring in their wagon train through the region, operating their large menagerie carousel at various venues. Makers included Heyn in Germany and Bayol in France. These early carousels had no platforms; the animals would hang from chains and fly out from the centrifugal force of the spinning mechanism. They were often powered by animals walking in a circle or people pulling a rope or cranking.

In the United Kingdom, merry-go-rounds usually turn clockwise, while in North America and Mainland Europe, carousels typically go anticlockwise as viewed from above.[5]

By the mid-19th century the platform carousel was developed; the animals and chariots were fixed to a circular floor that would suspend from a centre pole and rotate around. These carousels were called dobbies and were operated manually by the operator or by ponies.

In mid-19th century England, the carousel became a popular fixture at fairs. The first steam-powered mechanical roundabout, invented by Thomas Bradshaw, appeared at the Aylsham Fair in about 1861. It was described by a Halifax Courier journalist as:

a roundabout of huge proportions, driven by a steam engine which whirled around with such impetuousity, that the wonder is the daring riders are not shot off like cannon- ball, and driven half into the middle of next month.[6] 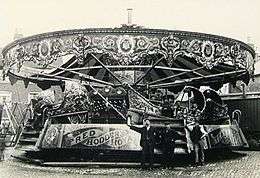 Savage's amusement ride, Sea-On-Land, where the riders would pitch up and down as if they were on the sea.

Soon afterwards, the engineer Frederick Savage began to branch out of agricultural machinery production into the construction of fairground machines, swiftly becoming the chief innovator in the field. By 1870, he was manufacturing carousels with Velocipedes (an early type of bicycle) and he soon began experimenting with other possibilities, including a roundabout with boats that would pitch and roll on cranks with a circular motion, a ride he called 'Sea-on-Land'.[7]

He soon applied a similar innovation to the more traditional mount of the horse; he installed gears and offset cranks on the platform carousels, thus giving the animals their well-known up-and-down motion as they travelled around the centre pole. The platform served as a position guide for the bottom of the pole and as a place for people to walk or other stationary animals or chariots to be placed. He called this ride the 'Platform Gallopers' . He also developed the 'platform-slide' which allowed the mounts to swing out concentrically as the carousel built up speed. Fairground organs (band organs) were often present (if not built in) when these machines operated. Eventually electric motors were installed and electric lights added, giving the carousel its classic look.

These mechanical innovations came at a crucial time, when increased prosperity meant that more people had time for leisure and spare money to spend on entertainment. It was in this historical context that the modern fairground ride was born,[8] with Savage supplying this new market demand. In his 1902 Catalogue for Roundabouts he claimed to have

...patented and placed upon the market all the principal novelties that have delighted the many thousands of pleasure seekers at home and abroad.[9]

Carousel built in 1905 by Gustav Dentzel which is still operational in Rochester, New York.

A 1909 horse by Marcus Illions in the Coney Island style.

In the United States, the carousel industry was developed by immigrants, notably Gustav Dentzel of Germany and Dare from England, from the late 19th century. Several centers and styles for the construction of carousels emerged in the United States: Coney Island style – characterized by elaborate, and sometimes faux-jeweled, saddles[10] – with Charles I. D. Looff; Philadelphia style – known for more realistically painted saddles – with Dentzel and the Philadelphia Toboggan Company; and Country Fair style – often with no saddles at all – with Allan Herschell and Edward Spillman of western New York, and Charles W. Parker of Kansas. The golden age of the carousel in America was the early 20th century, with large machines and elaborate animals, chariots, and decorations being built.

Similar uses of the term "carousel" 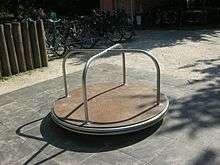 Manually powered carousel on a playground in Germany.

Various photographic slide projectors, notably those made by Kodak until 2004, used rotating trays or magazines called carousels to hold the slides and were often known as "carousel projectors."

A carousel in Bunkyo, Japan.

The classic film The Sting features a large indoor carrousel adjacent a brothel, where the Madame allows the girls to ride on slow nights. "Carousel"(song) by Melanie Martinez