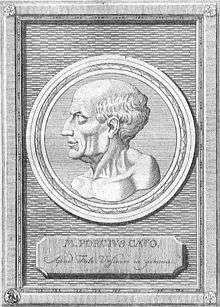 Cato the Elder (234–149 BCE), the most persistent advocate in the Senate for the total destruction of Carthage, and most famously associated with repeated use, in or out of its proper context, of the phrase Delenda est Carthago 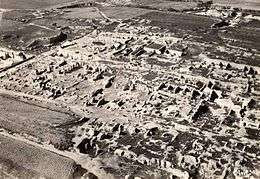 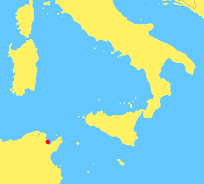 The location of Carthage in North Africa

"Ceterum censeo Carthaginem esse delendam" or "Ceterum autem censeo Carthaginem esse delendam" (English: "Furthermore, (moreover) I consider that Carthage must be destroyed") often abbreviated to "Ceterum censeo", "Carthago delenda est", or "Delenda est Carthago" (English: "Carthage must be destroyed") is a Latin oratorical phrase which was in popular use in the Roman Republic in the 2nd Century BCE during the latter years of the Punic Wars against Carthage, by the party urging a foreign policy which sought to eliminate any further threat to the Roman Republic from its ancient rival Carthage, which had been defeated twice before and had a tendency after each defeat to rapidly rebuild its strength and engage in further warfare. It represented a policy of the elimination of the enemies of Rome who engaged in aggression, and the rejection of the peace treaty as a means of ending conflict. The phrase was most famously uttered frequently by the Roman senator Cato the Elder (234–149 BCE), as a part of his speeches.

The phrase employs delenda, the feminine singular gerundive form of the verb delēre ("destroy").[1] The gerundive (or future passive participle) delenda is a verbal adjective that may be translated as "to be destroyed". When combined with a form of the verb esse ("to be"), it adds an element of compulsion or necessity, yielding "is to be destroyed", or, as it is more commonly rendered, "must be destroyed". The gerundive delenda functions as a predicative adjective in this construction,[2] which is known as the passive periphrastic.

Although the Romans were successful in the first two Punic Wars, as they vied for dominance with the seafaring Phoenician city-state of Carthage in North Africa (modern day Tunisia), they suffered a number of humiliations and damaging reverses in the course of these engagements, especially at the Battle of Cannae (216 BCE). This grew into an attitude of seeking vengeance and total victory, which was expressed by these phrases. The city of Carthage was indeed finally razed by the Roman general Scipio Aemilianus after the Third Battle of Carthage in 146 BCE, and its entire remaining population was sold into slavery. It thus never again posed a threat to Rome -- at least until taken over by the Vandals, who looted Rome in 455.[8] The modern legend that the city was sown with salt reflects the perceived savagery of its destruction.

Although no ancient source gives the phrase exactly as it is usually quoted in modern times (either Carthago delenda est or the fuller Ceterum censeo Carthaginem esse delendam), according to several ancient sources the Roman statesman Cato the Elder frequently if not invariably ended his speeches in the Senate with a variant of this expression even when his speech had been totally unrelated to Roman foreign policy towards Carthage.[9] The main ancient sources, are:

The evolution of the phrasing towards its modern forms has been considered by Silvia Thürlemann, in her article Ceterum censeo Carthaginem esse delendam in the journal Gymnasium 81 (1974).

A common modern use in order to emphasise to third parties the strength of one's opinion about a perceived necessary course of action is to add either at the beginning or the end of a statement the two opening words "Ceterum censeo..."

The phrase is sometimes fully adapted in modern usage, as a learned reference to total warfare.[12] In 1673 the English minister Anthony Ashley Cooper, 1st Earl of Shaftesbury revived the phrase in the form "Delenda est Carthago" in a famous speech before Parliament during the Third Anglo-Dutch War, comparing England to Rome and the Dutch Republic to Carthage. The pro-German radio station Radio Paris in occupied France between 1940 and 1944 had "England, like Carthage, shall be destroyed!" as its slogan. Ben Klassen, the founder of the anti-Semitic Church of the Creator, adopted the phrase for his movement, modifying it to Delenda est Judaica, "Judaism must be destroyed".[13] The phrase was used as the title for Alan Wilkins' 2007 play on the Third Punic War.[14] and for a book about Carthaginian history by Richard Miles.

In Isaac Asimov's novel Robots and Empire, Dr. Mandamus uses a note with the phrase in order to convince Kelden Amadiro to see him about his plan of destroying Earth, which they both consider the ultimate enemy of the Spacer worlds. In this case, the phrase is written as "Ceterum censeo, delenda est Carthago" and Mandamus translates it as "In my opinion, Carthage must be destroyed". A modified version of the phrase is used in the novel Peace on Earth by Stanisław Lem ("Ceterum censeo humanitatem preservandam esse" - "Furthermore, I consider that mankind must be saved").[15]

Janusz Korwin-Mikke, a Polish Member of the European Parliament, has expressed his political views by ending his speech with "The European Union must be destroyed".[16]