Cem was the third son of Sultan Mehmed II and younger half-brother of Sultan Bayezid II, and thus a half-uncle of Sultan Selim I of Ottoman Empire.

After being defeated by Bayezid, Cem went on exile in Egypt and Europe, under the protection of the Mamluks, the Knights Hospitaller of St. John on the island of Rhodes, and ultimately the Pope.

Cem was born on 22 December 1459 in Edirne.[1] His mother, Çiçek Hatun (Çiçek Khātūn), was probably of Serbian origin. In accordance with the custom for an Ottoman prince (şehzade, şehzāde), Cem was appointed to a provincial governorship of Kastamonu in 1469. In December 1474, Cem replaced his deceased brother Mustafa as governor of Karaman in Konya.[1]

At the death of Mehmed the Conqueror, on May 3, 1481, Bayezid was the governor of Sivas, Tokat and Amasya, and Cem ruled the provinces of Karaman and Konya. With no designated heir after Mehmed, conflict over succession to the throne erupted between Cem and Bayezid.

Contrary to Islamic law, which prohibits any unnecessary delay in burial, Mehmed II's body was transported to Constantinople, where it lay three days. His grand vizier Karamanlı Mehmet Pasha – believing himself to be fulfilling the wishes of the recently deceased Sultan – attempted to arrange a situation whereby the younger son Cem, whose governing seat at Konya was closer than his brother Bayezid's seat at Amasya, would arrive in Constantinople prior to his older sibling and be able to claim the throne.

However, Bayezid had already established a political network of influential pashas ( two of whom were his sons in law), the janissaries, and those opposed to the policies of Mehmed II and the grand vizier. In spite of Karamanlı Mehmet Pasha's attempts at secrecy, the Sultan's death and the grand vizier's plan were discovered by the Janissary corps, who supported Bayezid over Cem and had been kept out of the capital after the Sultan's death. As a result, the Janissary corps rebelled, entering the capital, and lynched the grand vizier.

After the death of Karamanlı Mehmet Pasha, there was widespread rioting among the janisseries in Constantinople as there was neither a sultan nor a grand vizier to control the developments. Understanding the danger of the situation, former grand vizier Ishak Pasha took the initiative of beseeching Bayezid to arrive with all due haste. In the meantime, Ishak Pasha took the cautionary measure of proclaiming Bayezid's 11-year-old son, Sehzade (prince) Korkut, as regent until the arrival of his father.[2]

Prince Bayezid arrived at Constantinople on May 21, 1481 and was declared Sultan Bayezid II. Only six days later, Cem captured the city of Inegöl with an army of 4,000. Sultan Bayezid sent his army under the command of vizier Ayas Pasha to kill his brother. On May 28, Cem had defeated Bayezid's army and declared himself Sultan of Anatolia, establishing his capital at Bursa. He proposed to divide the empire between him and his brother, leaving Bayezid the European side. Bayezid furiously rejected the proposal, declared that "between rulers there is no kinship,"[3] and marched on to Bursa. The decisive battle between the two contenders to the Ottoman throne took place on June 19, 1481, near the town of Yenişehir. Cem lost and fled with his family to the Mamluk Cairo.

The Mamlūk sultan Qāʾit Bāy (r. 1468–96) received Cem with honour in Cairo, and Cem took the opportunity to go on pilgrimage to Mecca. (He is the only Ottoman prince to have made the pilgrimage).[3]

In Cairo, Cem received a letter from his brother, offering Cem one million akçes (the Ottoman currency) to stop competing for the throne. Cem rejected the offer, and in the following year he launched a campaign in Anatolia under the support of Kasım Bey (Qāsım Beğ), heir of the ruling house of Karaman, and the sanjek bey of Ankara. On May 27, 1482, Cem besieged Konya but was soon defeated and forced to withdraw to Ankara. He intended to give it all up and return to Cairo but all of the roads to Egypt were under Bayezid's control. Cem then tried to renegotiate with his brother. Bayezid offered him a stipend to live quietly in Jerusalem but refused to divide the empire, prompting Cem to flee to Rhodes on 29 July 1482. 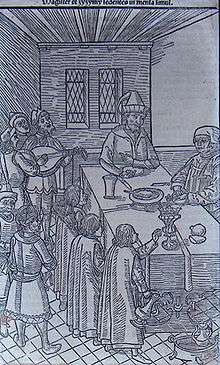 Cem Sultan (middle) and Pierre d'Aubusson at a dinner in Rhodes

Upon arriving at Rhodes, Cem asked the protection of the French captain of Bodrum Castle. Pierre d'Aubusson, grand master of the Knights of St. John, the Latin Catholic order on the island. On July 29, Cem arrived at Rhodes and was received with honor. In return for the overthrow of the new sultan Bayezid, Prince Cem offered perpetual peace between the Ottoman Empire and Christendom if he regained the Ottoman throne. However, Pierre d'Aubusson realized that conflict with Bayezid would be imprudent, so he secretly approached Bayezid, concluded a peace treaty, and then reached a separate agreement on Cem's captivity in March 1483. D’Aubusson promised Bayezid to detain Cem in return for an annual payment of 40,000 ducats for his maintenance.

Therefore, the Knights took the money and betrayed Cem, who thereafter became a well-treated prisoner at Rhodes. Afterwards, Cem was sent to the castle of Pierre d'Aubusson in France.

Cem had reached Nice on 17 October 1482, en route to Hungary, but the Knights were playing for time. After the agreement about his confinement was finalised, he became a hostage, as well as a potential tool. Some hoped to use his name and person to foment turmoil in the Ottoman realm, including the Mamlūk sultan Qāʾit Bāy, the king of Hungary, Matthias Corvinus, and Pope Innocent VIII. Others, such as the Knights of Saint John, the Venetians, the king of Naples, and Popes Innocent VIII and Pope Alexander VI, viewed his presence in Europe as a deterrent to Ottoman aggression against Christendom and an opportunity for profit. For his part, Bayezid II dispatched ambassadors and spies to the West to assure that his rival was detained indefinitely, and he even attempted to eliminate him through assassination.[1]

Cem spent a year in the Duchy of Savoy. After the death of King Louis XI of France (30 August 1483), who had refused to accept a Muslim in his lands, the Knights of Saint John transferred him to Limousin (D’Aubusson’s birthplace). Cem spent the next five years there, mostly at Bourganeuf. He was well treated, but essentially a captive (a fortified tower was constructed to house him). Bayezid II negotiated both with D’Aubusson, to have Cem returned to Rhodes, and with representatives of the new French monarch, Charles VIII, to have him kept in France. When the king of Hungary and Pope Innocent VIII sought custody of the prince, the Pope prevailed, and Cem arrived in Rome on 13 March 1489.

Innocent VIII rebuffed overtures from the Mamlūks and prepared to launch a crusade against the Ottomans, but it was postponed when Matthias Corvinus of Hungary died on 6 April 1490. These developments worried Bayezid, who contacted D’Aubusson and also sent Mustafa Bey (later a grand vizier) to Rome, to conclude a secret agreement, in December 1490. The sultan promised not to attack Rhodes, Rome, or Venice, as well as to pay Cem’s allowance of 40,000 ducats to the Pope (10,000 of which were earmarked for the Knights of Saint John), in return for the prince’s incarceration. Apparently, Cem found life in Rome more pleasant than in France, and he had lost hope of seizing the Ottoman throne, but he wanted to die in a Muslim land. His wish would not be realized.[1]

Pope Innocent VIII unsuccessfully attempted to use Cem to begin a new crusade against the Ottomans.[4] The Pope also tried to convert Cem to Christianity, without success. Cem's presence in Rome was useful nevertheless, because whenever Bayezid intended to launch a military campaign against Christian nations of the Balkans, the Pope would threaten to release his brother.

In exchange for maintaining the custody of Cem, Bayezid paid Innocent VIII 120,000 crowns (at the time, equal to all other annual sources of papal revenue combined), a relic of the Holy Lance (which allegedly had pierced the side of Christ), one-hundred Moorish slaves, and an annual fee of 45,000 ducats. Much of the costs associated with the Sistine Chapel were paid with funds from the Ottoman ransoms.[5]

In 1494, Charles VIII invaded Italy, to take possession of the kingdom of Naples, and announced a crusade against the Turks. He compelled Pope Alexander VI to surrender Cem, who left Rome with the French army on 28 January 1495. The prince died in Naples on 24 February. Some accounts attribute his death to poison, but he probably succumbed to pneumonia.

Cem died in Capua on February 25, 1495, while on a military expedition to conquer Naples under the command of King Charles VIII of France. Sultan Bayezid declared national mourning for three days. He also requested to have Cem's body for a Islamic funeral, but it was not until four years after Cem's death that his body was finally brought to the Ottoman lands because of attempts to receive more gold for Cem's corpse. He was buried in Bursa.[3]

In the 1490s, a book in Latin was written about Cem's life. It was illustrated by Guillaume Caoursin, vice-chancellor of the Knights Hospitaller. It was published in several European cities that possessed printing capability: Venice, Paris, Bruges, Salamanca, Ulm and London. The many illustrations in the book are the first accurately described representations in Western Europe of costumes and weapons of the Turkish people.

An account of Cem's captivity—and of the political machinations that kept him captive—forms the basis of the historical novel, Francesca: Les Jeux du Sort (1872), written by the Haitian writer and political exile, Demesvar Delorme.[6]

Cem's life also served as inspiration for a character in the book The Damned Yard (1954) by Ivo Andrić.

Bulgarian historian Vera Mutafchieva, inspired by Cem Sultan's importance in European politics of the 15th century, wrote a novel (The Cem case)(1967) about him. The book follows closely the historical facts and was translated and printed into Russian, Turkish, German, Hungarian and Estonian languages.