Selim I (Ottoman Turkish: سليم اول, Modern Turkish: I. Selim; 1470/1 – September 1520), known as Selim the Grim (Turkish: Yavuz Sultan Selim), was the Sultan of the Ottoman Empire from 1512 to 1520.[1] His reign is notable for the enormous expansion of the Empire, particularly his conquest between 1516 and 1517 of the entire Mamluk Sultanate of Egypt, which included all of the Levant, Hejaz, Tihamah, and Egypt itself.

Through the conquest and unification of the Muslim heartlands, and after having the Sharif of Mecca grant him the title Custodian of the Two Holy Mosques in 1517, Selim strengthened the Ottoman claim to caliphate. His expansion into the Middle East represented a sudden change in the direction of Ottoman expansion, which, before his reign, had mostly been within the Balkans (Southeast Europe) and Anatolia (Asia Minor).[2] On the eve of his death in 1520, the Ottoman Empire spanned about 576,900 sq mi (1,494,000 km2), having grown by seventy percent during Selim's reign.[1]

Born in Amasya around 1470, Selim was the youngest son of Bayezid II (1481–1512). Selim's mother was Gülbahar Hatun, a Turkish princess from the Dulkadir State centered around Elbistan in Maraş; her father was Alaüddevle Bozkurt Bey, the eleventh ruler of the Dulkadirs.[3][4] Some academics state that Selim's mother was a lady named Gülbahar Hatun,[5] but chronological analysis suggests that this is highly unlikely and that his biological mother was Ayşe Hatun.[6]

By 1512, Şehzade Ahmet was the favorite candidate to succeed his father. Bayezid, who was reluctant to continue his rule over the empire, announced Ahmet as heir apparent to the throne. Angered with this announcement, Selim rebelled, and while he lost the first battle against his father's forces, Selim ultimately dethroned his father. Selim ordered the purge of Bayezid to a far away "sanjak", Dimetoka. Bayezid died immediately thereafter.[7] Selim put his brothers (Şehzade Ahmet and Şehzade Korkut) and nephews to death upon his accession in order to eliminate potential pretenders to the throne. This fratricidal policy was motivated by bouts of civil strife that had been sparked by the antagonism between Selim’s father and his uncle, Cem Sultan, and between Selim himself and his brother Ahmet.

Selim I was described as tall, with very broad shoulders and a long mustache. He was skilled in politics and was said to be fond of fighting.[8] In 1494, at Trabzon, he married Ayşe Hafsa Sultan.

Conquest of the Middle East 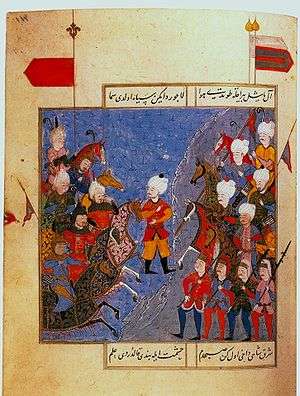 16th-century Ottoman miniature of the Battle of Chaldiran.

One of Selim's first challenges as Sultan was the growing tension between himself and Shah Ismail, who had recently brought the Safavids to power and had switched the state religion from Sunni Islam to the adherence of the Twelver branch of Shia Islam. By 1510, he had conquered the whole of Iran and Azerbaijan,[9] southern Dagestan (with its important city of Derbent), Mesopotamia, Armenia, Khorasan, Eastern Anatolia, and had made the Georgian kingdoms of Kartli and Kakheti his vassals.[10][11] He was a great threat to his Sunni Muslim neighbors to the west. In 1511, Ismail had supported a pro Shia/Safavid uprising in Anatolia, the Şahkulu Rebellion.

In 1514, Selim I attacked Ismail's kingdom to stop the spread of Shiism into Ottoman dominions. Selim and Ismā'il had been exchanging a series of belligerent letters prior to the attack. Selim I defeated Ismā'il at the Battle of Chaldiran in 1514.[12] Ismā'il's army was more mobile and their soldiers were better prepared, but the Ottomans prevailed due in large part to their efficient modern army, possession of artillery, black powder and muskets. Ismā'il was wounded and almost captured in battle, and Selim I entered the Iranian capital of Tabriz in triumph on September 5,[13] but did not linger. The Battle of Chaldiran was of historical significance, as the reluctance of Shah Ismail to accept the advantages of modern firearms and the importance of artillery was decisive.[14] After the battle, Selim, referring to Ismail, stated that his adversary was: "Always drunk to the point of losing his mind and totally neglectful of the affairs of the state".[15] 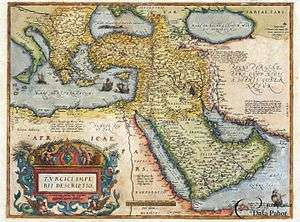 Selim then conquered the Mamluk Sultanate of Egypt, defeating the Mamluk Egyptians first at the Battle of Marj Dabiq, and then at the Battle of Ridanieh. This led to the Ottoman annexation of the entire sultanate, from Syria and Palestine in Sham, to Hejaz and Tihamah in the Arabian Peninsula, and ultimately Egypt itself. This permitted him to extend Ottoman power to the Muslim holy cities of Mecca and Medina, hitherto under Egyptian rule. Rather than style himself the Ḥākimü'l-Ḥaremeyn, or The Ruler of The Two Holy Cities, he accepted the more pious title Ḫādimü'l-Ḥaremeyn, or The Servant of The Two Holy Cities.[7][16]

The last Abbasid caliph, al-Mutawakkil III, was residing in Cairo as a Mamluk puppet at the time of the Ottoman conquest. He was subsequently sent into exile in Istanbul. In the eighteenth century a story emerged claiming that he had officially transferred his title to the Caliphate to Selim at the time of the conquest. In fact, Selim did not make any claim to exercise the sacred authority of the office of caliph, and the notion of an official transfer was a later invention.[17]

After conquering Damascus in 1516, Selim ordered the restoration of the tomb of Ibn Arabi (d. 1240), a famous Sufi master who was highly revered among Ottoman Sufis.[18] 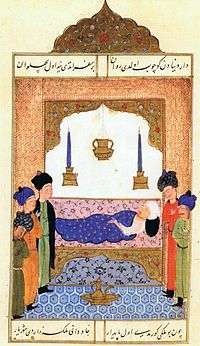 Selim I on his deathbed.

The türbe of Selim I in his mosque

This campaign was cut short when Selim was overwhelmed by sickness and subsequently died in the ninth year of his reign. He was about fifty-five years of age. Officially it is said that Selim succumbed to sirpence, a skin infection that he had developed during his long campaigns on horseback. (Sirpence was an anthrax infection sometimes seen among leatherworkers and others who worked with livestock.) Some historians, however, suggest that he died of cancer or that he was poisoned by his physician.[19] Other historians have noted that Selim's death coincided with a period of plague in the empire, and have added that several sources imply that Selim himself suffered from the disease.[20] 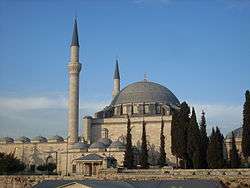 By most accounts, Selim had a fiery temper and had very high expectations of his subordinates. Several of his viziers were executed for various reasons. A famous anecdote relates how another vizier playfully asked the Sultan for some preliminary notice of his doom so that he might have time to put his affairs in order. The Sultan laughed and replied that indeed he had been thinking of having the vizier killed, but had no one fit to take his place, otherwise he would gladly oblige. A popular Ottoman curse was, "May you be a vizier of Selim's," as a reference to the number of viziers he had executed.[21]

Selim was one of the Empire's most successful and respected rulers, being energetic and hardworking. During his short eight years of ruling, he accomplished momentous success. Despite the length of his reign, many historians agree that Selim prepared the Ottoman Empire to reach its zenith under the reign of his son and successor, Suleiman the Magnificent.[22]

Selim was also a distinguished poet who wrote both Turkish and Persian verse under the nickname Mahlas Selimi; collections of his Persian poetry are extant today.[22] In one of his poems, he wrote:

Relations with the Shah Ismail

While marching into Persia in 1514, Selim's troops suffered from the scorched-earth tactics of Shah Ismail. The Sultan hoped to lure Ismail into an open battle before his troops starved to death, and began writing insulting letters to the Shah, accusing him of cowardice:

They, who by perjuries seize scepters ought not to skulk from danger, but their breast ought, like the shield, to be held out to encounter peril; they ought, like the helm, to affront the foeman's blow.

Ismail responded to Selim's third message, quoted above, by having an envoy deliver a letter accompanied by a box of opium. The Shah's letter insultingly implied that Selim's prose was the work of an unqualified writer on drugs. Selim was enraged by the Shah's denigration of his literary talent and ordered the Persian envoy to be torn to pieces.[23]

Babur's early relations with the Ottomans were initially troubled because Selim provided Babur's arch-rival Ubaydullah Khan with powerful matchlocks and cannons to counter the influence of the Safavids. In 1507, when ordered to accept Selim as his Caliph and suzerain, Babur refused.

In 1513, Selim reconciled with Babur, dispatched Ustad Ali Quli the artilleryman, Mustafa Rumi the matchlock marksman, and many other Ottoman Turks to assist Babur in his conquests. Thenceforth this particular assistance proved to be the basis of future Mughal-Ottoman relations.