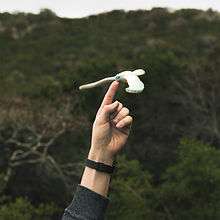 The center of mass is a useful reference point for calculations in mechanics that involve masses distributed in space, such as the linear and angular momentum of planetary bodies and rigid body dynamics. In orbital mechanics, the equations of motion of planets are formulated as point masses located at the centers of mass. The center of mass frame is an inertial frame in which the center of mass of a system is at rest with respect to the origin of the coordinate system.

The concept of "center of mass" in the form of the center of gravity was first introduced by the ancient Greek physicist, mathematician, and engineer Archimedes of Syracuse. He worked with simplified assumptions about gravity that amount to a uniform field, thus arriving at the mathematical properties of what we now call the center of mass. Archimedes showed that the torque exerted on a lever by weights resting at various points along the lever is the same as what it would be if all of the weights were moved to a single point—their center of mass. In work on floating bodies he demonstrated that the orientation of a floating object is the one that makes its center of mass as low as possible. He developed mathematical techniques for finding the centers of mass of objects of uniform density of various well-defined shapes.[1]

Newton's second law is reformulated with respect to the center of mass in Euler's first law.[8] 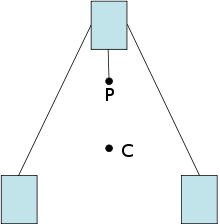 Diagram of an educational toy that balances on a point: the center of mass (C) settles below its support (P)

A system of particles

Solving this equation for R yields the formula

where M is the sum of the masses of all of the particles.

If the mass distribution is continuous with the density ρ(r) within a solid Q, then the integral of the weighted position coordinates of the points in this volume relative to the center of mass R over the volume V is zero, that is

Solve this equation for the coordinates R to obtain

where M is the total mass in the volume.

The coordinates R of the center of mass of a two-particle system, P1 and P2, with masses m1 and m2 is given by

Let the percentage of the total mass divided between these two particles vary from 100% P1 and 0% P2 through 50% P1 and 50% P2 to 0% P1 and 100% P2, then the center of mass R moves along the line from P1 to P2. The percentages of mass at each point can be viewed as projective coordinates of the point R on this line, and are termed barycentric coordinates. Another way of interpreting the process here is the mechanical balancing of moments about an arbitrary point. The numerator gives the total moment that is then balanced by an equivalent total force at the center of mass. This can be generalized to three points and four points to define projective coordinates in the plane, and in space, respectively.

For particles in a system with periodic boundary conditions two particles can be neighbours even though they are on opposite sides of the system. This occurs often in molecular dynamics simulations, for example, in which clusters form at random locations and sometimes neighbouring atoms cross the periodic boundary. When a cluster straddles the periodic boundary, a naive calculation of the center of mass will be incorrect. A generalized method for calculating the center of mass for periodic systems is to treat each coordinate, x and y and/or z, as if it were on a circle instead of a line.[10] The calculation takes every particle's x coordinate and maps it to an angle,

where xmax is the system size in the x direction and

. From this angle, two new points

plane, these coordinates lie on a circle of radius 1. From the collection of

values from all the particles, the averages

are calculated. These values are mapped back into a new angle,

, from which the x coordinate of the center of mass can be obtained:

The process can be repeated for all dimensions of the system to determine the complete center of mass. The utility of the algorithm is that it allows the mathematics to determine where the "best" center of mass is, instead of guessing or using cluster analysis to "unfold" a cluster straddling the periodic boundaries. It must be noted that if both average values are zero,

is undefined. This is a correct result, because it only occurs when all particles are exactly evenly spaced. In that condition, their x coordinates are mathematically identical in a periodic system.

A body's center of gravity is the point around which the resultant torque due to gravity forces vanishes. Where a gravity field can be considered to be uniform, the mass-center and the center-of-gravity will be the same. However, for satellites in orbit around a planet, in the absence of other torques being applied to a satellite, the slight variation (gradient) in gravitational field between closer-to (stronger) and further-from (weaker) the planet can lead to a torque that will tend to align the satellite such that its long axis is vertical. In such a case, it is important to make the distinction between the center-of-gravity and the mass-center. Any horizontal offset between the two will result in an applied torque.

It is useful to note that the mass-center is a fixed property for a given rigid body (e.g. with no slosh or articulation), whereas the center-of-gravity may, in addition, depend upon its orientation in a non-uniform gravitational field. In the latter case, the center-of-gravity will always be located somewhat closer to the main attractive body as compared to the mass-center, and thus will change its position in the body of interest as its orientation is changed.

In the study of the dynamics of aircraft, vehicles and vessels, forces and moments need to be resolved relative to the mass center. That is true independent of whether gravity itself is a consideration. Referring to the mass-center as the center-of-gravity is something of a colloquialism, but it is in common usage and when gravity gradient effects are negligible, center-of-gravity and mass-center are the same and are used interchangeably.

In physics the benefits of using the center of mass to model a mass distribution can be seen by considering the resultant of the gravity forces on a continuous body. Consider a body Q of volume V with density ρ(r) at each point r in the volume. In a parallel gravity field the force f at each point r is given by,

where dm is the mass at the point r, g is the acceleration of gravity, and k is a unit vector defining the vertical direction. Choose a reference point R in the volume and compute the resultant force and torque at this point,

If the reference point R is chosen so that it is the center of mass, then

By selecting the center of gravity as the reference point for a rigid body, the gravity forces will not cause the body to rotate, which means the weight of the body can be considered to be concentrated at the center of mass.

where m is the total mass of all the particles, p is the linear momentum, and L is the angular momentum.

Newton's laws of motion require that for any system with no external forces the momentum of the system is constant, which means the center of mass moves with constant velocity. This applies for all systems with classical internal forces, including magnetic fields, electric fields, chemical reactions, and so on. More formally, this is true for any internal forces that satisfy Newton's Third Law.[11]

Locating the center of mass 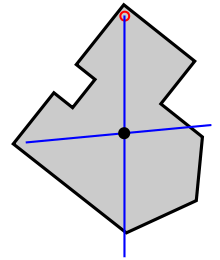 An experimental method for locating the center of mass is to suspend the object from two locations and to drop plumb lines from the suspension points. The intersection of the two lines is the center of mass.[13]

The shape of an object might already be mathematically determined, but it may be too complex to use a known formula. In this case, one can subdivide the complex shape into simpler, more elementary shapes, whose centers of mass are easy to find. If the total mass and center of mass can be determined for each area, then the center of mass of the whole is the weighted average of the centers.[14] This method can even work for objects with holes, which can be accounted for as negative masses.[15]

A direct development of the planimeter known as an integraph, or integerometer, can be used to establish the position of the centroid or center of mass of an irregular two-dimensional shape. This method can be applied to a shape with an irregular, smooth or complex boundary where other methods are too difficult. It was regularly used by ship builders to compare with the required displacement and center of buoyancy of a ship, and ensure it would not capsize.[16][17]

This equation yields the coordinates of the center of mass R* in the horizontal plane as,

The center of mass lies on the vertical line L, given by

The three-dimensional coordinates of the center of mass are determined by performing this experiment twice with the object positioned so that these forces are measured for two different horizontal planes through the object. The center of mass will be the intersection of the two lines L1 and L2 obtained from the two experiments. 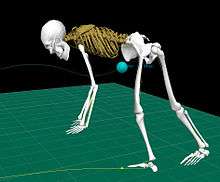 Estimated center of mass/gravity (blue sphere) of a gymnast at the end of performing a cartwheel. Notice center is outside the body in this position.

Engineers try to design a sports car so that its center of mass is lowered to make the car handle better. When high jumpers perform a "Fosbury Flop", they bend their body in such a way that it clears the bar while its center of mass does not necessarily clear it.[18]

Main article: Center of gravity of an aircraft

The center of mass plays an important role in astronomy and astrophysics, where it is commonly referred to as the barycenter. The barycenter is the point between two objects where they balance each other; it is the center of mass where two or more celestial bodies orbit each other. When a moon orbits a planet, or a planet orbits a star, both bodies are actually orbiting around a point that lies away from the center of the primary (larger) body.[22] For example, the Moon does not orbit the exact center of the Earth, but a point on a line between the center of the Earth and the Moon, approximately 1,710 km (1,062 miles) below the surface of the Earth, where their respective masses balance. This is the point about which the Earth and Moon orbit as they travel around the Sun. If the masses are more similar, e.g., Pluto and Charon, the barycenter will fall outside both bodies.