Ceratitis capitata, the Mediterranean fruit fly, or medfly for short, is a species of fruit fly capable of causing extensive damage to a wide range of fruit crops. It is native to the Mediterranean area, but has spread invasively to many parts of the world, including Australasia and North and South America. 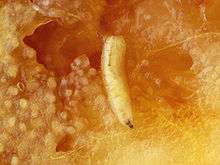 Larva of the medfly

Adult medflies lay their eggs under the skins of fruit, particularly where the skin is already broken. The eggs hatch within three days, and the larvae develop inside the fruit. Maggots may stay from 5 to 10 days (depending on temperature and food availability by fruit size). Once the larvae reach the next development stage, it will dig its way out of the fruit, making a small hole and then falling to the ground where it starts to dig and then pupates centimeters underground. Depending on temperature adult emergence may occur in as short as 7 days. The adults have a limited ability to disperse, but the global fruit trade can transport infected fruit over thousands of miles.

Sex determination in C. capitata is by the familiar XY system. Unusually for a dipteran and for a frugivore, medflies do not have an opsin gene for blue light perception as shown from the whole-genome sequencing project completed in September 2016.[1]

In the United States, C. capitata has invaded four states (Hawaii, California, Texas and Florida), but has been eradicated from all but Hawaii. Reintroduced populations of the medfly have been spotted in California as recently as mid September 2009, requiring additional eradication and quarantine efforts.[2] It has also been eradicated from New Zealand and Chile.

Much research has been dedicated to means of controlling the medfly. In particular, use of the sterile insect technique has allowed the species to be eradicated from several areas.

In 1981, California Governor Jerry Brown, who had established a reputation as a strong environmentalist, was confronted with a serious medfly infestation in the San Francisco Bay Area. He was advised by the state's agricultural industry, and the US Department of Agriculture's Animal and Plant Health Inspection service (APHIS), to authorize airborne spraying of the region. Initially, in accordance with his environmental protection stance, he chose to authorize ground-level spraying only. Unfortunately, the infestation spread as the medfly reproductive cycle out-paced the spraying. After more than a month, millions of dollars of crops had been destroyed and billions of dollars more were threatened. Governor Brown then authorized a massive response to the infestation. Fleets of helicopters sprayed malathion at night, and the California National Guard set up highway checkpoints and collected many tons of local fruit. In the final stage of the campaign, entomologists released millions of sterile male medflies in an attempt to disrupt the insects' reproductive cycle.

Ultimately the infestation was eradicated, but both the Governor's delay and the scale of the action has remained controversial ever since. Some people claimed that malathion was toxic to humans, as well as insects. In response to such concerns, Brown's chief of staff, B. T. Collins, staged a news conference during which he publicly drank a small glass of malathion. Many people complained that, while the malathion may not have been very toxic to humans, the aerosol spray containing it was corrosive to car paint.

During the week of September 9, 2007, adult flies and their larvae were found in Dixon, California. The California Department of Food and Agriculture (CDFA) and cooperating county and federal agricultural officials started eradication and quarantine efforts in the area. Eradication was declared on August 8, 2008, when no "wild" (i.e. non-sterile) medflies were detected for three generations.

In 2011, Japan banned imports of blueberries from Australia, because of "concerns they might be contaminated with Mediterranean fruit fly".[4]