For other uses, see Charismatic (disambiguation). 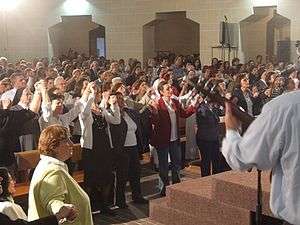 Praise and Worship during a Catholic Charismatic Renewal Healing Service.

The Charismatic Movement is the international trend of historically mainstream congregations adopting beliefs and practices similar to Pentecostalism. Fundamental to the movement is the use of spiritual gifts (charismata). Among Protestants, the movement began around 1960. Among Roman Catholics, it originated around 1967.

Pentecostalism began in the early twentieth century. Its doctrinal distinctive involved a dramatic encounter with God termed baptism with the Holy Spirit. The evidence for having received this experience was speaking in tongues. American Lutheran minister Harald Bredesen coined the term "charismatic" in 1962 to describe what was happening in mainline Protestant denominations. Confronted with the term "neo-Pentecostal", he preferred to call it "the charismatic renewal in the historic churches".

Before 1955 the religious mainstream did not embrace Pentecostal doctrines. If a church member or clergyman openly expressed such views, they would (either voluntarily or involuntarily) separate from their existing denomination. The charismatic movement represented a reversal of this previous pattern as those influenced by Pentecostal spirituality chose to remain in their original denominations.[1]

The high church wing of the American Episcopal Church became the first traditional ecclesiastical organization to feel the impact of the new movement internally. The beginning of the charismatic movement is usually dated to Sunday, April 3, 1960, when Dennis J. Bennett, rector of St Mark's Episcopal Church in Van Nuys, California recounted his Pentecostal experience to his parish, doing it again on the next two Sundays, including Easter (April 17), during which many of his congregation share his experience, causing him to be forced to resign.[2] The resulting controversy and press coverage spread an awareness of the emerging charismatic movement. The movement grew to embrace other mainline churches, where clergy began receiving and publicly announcing their Pentecostal experiences. These clergy began holding meetings for seekers and healing services which included praying over and anointing of the sick. The Catholic Charismatic Renewal began in 1967 at Duquesne University in Pittsburgh, Pennsylvania.[3]

Despite the fact that Pentecostals currently tend to share more in common with evangelicals than with either Roman Catholics or mainline Protestants, the charismatic movement was not initially influential among evangelical churches. C. Peter Wagner traces the spread of the charismatic movement within evangelicalism to around 1985. He termed this movement the Third Wave of the Holy Spirit.[4] The Third Wave has expressed itself through the formation of churches and denomination-like organizations. These groups are referred to as "neo-charismatic". The Vineyard Movement and the British New Church Movement exemplify Third Wave or neo-charismatic organizations.

Charismatic Christians believe that the gifts (Greek charismata χάρισμα, from charis χάρις, grace) of the Holy Spirit as described in the New Testament are available to contemporary Christians through the infilling or baptism of the Holy Spirit, with-or-without the laying on of hands.[5] Although the Bible lists many gifts from God through His Holy Spirit, there are nine specific gifts listed in 1 Corinthians 12:8-10 that are Supernatural in nature and are the focus of and distinguishing feature of the Charismatic Movement: Word of Wisdom, Word of Knowledge, Faith, Gifts of Healing, Miraculous Powers, Prophecy, Distinguishing between Spirits, Speaking in different Tongues (Languages), and Interpretation of Tongues.

While Pentecostals and charismatics share these beliefs, there are differences. Many in the charismatic movement deliberately distanced themselves from Pentecostalism for cultural and theological reasons. Foremost among theological reasons is the tendency of many Pentecostals to insist that speaking in tongues is always the initial physical sign of receiving Spirit baptism. Although specific teachings will vary from group to group, charismatics generally believe that the baptism with the Holy Spirit occurs at the new birth and prefer to call subsequent encounters with the Holy Spirit by other names, such as "being filled".[5] In contrast to Pentecostals, charismatics tend to accept a range of supernatural experiences (such as prophecy, miracles, healing, or "physical manifestations of an altered state of consciousness") as evidence of having been baptized or filled with the Holy Spirit.[6]

Pentecostals are also distinguished from the charismatic movement on the basis of style.[7] Also, Pentecostals have traditionally placed a high value on evangelization and missionary work. Charismatics, on the other hand, have tended to see their movement as a force for revitalization and renewal within their own church traditions.[8]

Detractors argue these sign and revelatory gifts were manifested in the New Testament for a specific purpose, upon which once accomplished these signs were withdrawn and no longer function.[9] This position is called cessationism, and is claimed by its proponents to be the almost universal position of Christians until the Charismatic movement started.[9] The Charismatic Movement is based on a belief that these gifts are still available today.

In America, the Episcopalian Dennis Bennett is sometimes cited as one of the charismatic movement's seminal influence.[10] Bennett was the Rector at St Mark's Episcopal Church in Van Nuys, California when he announced to the congregation in 1960 that he had received the outpouring of the Holy Spirit.[11] Soon after this he ministered in Seattle, where he ran many workshops and seminars about the work of the Holy Spirit.[12]

In the United Kingdom, Colin Urquhart, Michael Harper, David Watson and others were in the vanguard of similar developments.

The Massey conference in New Zealand, 1964 was attended by several Anglicans, including the Rev. Ray Muller, who went on to invite Bennett to New Zealand in 1966, and played a leading role in developing and promoting the Life in the Spirit seminars. Other Charismatic movement leaders in New Zealand include Bill Subritzky.

The movement led to the creation of independent evangelical charismatic churches more in tune with this revival of the Holy Spirit. Calvary Chapel Costa Mesa, California is one of the first evangelical charismatic church in 1965.[13] In the United Kingdom, Jesus Army, founded in 1969, is an example of the impact outside of the United States.[14] Many other congregations were established in the rest of the world.[15]

Larry Christenson, a Lutheran theologian based in San Pedro, California, did much in the 1960s and 1970s to interpret the charismatic movement for Lutherans. A very large annual conference was held in Minneapolis during those years. Charismatic Lutheran congregations in Minnesota became especially large and influential; especially "Hosanna!" in Lakeville, and North Heights in St. Paul. The next generation of Lutheran charismatics cluster around the Alliance of Renewal Churches. There is currently considerable charismatic activity among young Lutheran leaders in California centered on an annual gathering at Robinwood Church in Huntington Beach. Richard A. Jensen's Touched by the Spirit published in 1974, played a major role of the Lutheran understanding to the charismatic movement.

In congregational and Presbyterian churches which profess a traditionally Calvinist or Reformed theology there are differing views regarding present-day continuation or cessation of the gifts (charismata) of the Spirit.[9][16] Generally, however, Reformed charismatics distance themselves from renewal movements with tendencies which could be perceived as overemotional, such as Word of Faith, Toronto Blessing, Brownsville Revival and Lakeland Revival.

Prominent Reformed charismatic denominations are the Sovereign Grace Churches and the Every Nation Churches in the USA, in Great Britain there is the Newfrontiers churches and movement, which leading figure is Terry Virgo.[17]

Since 1967 the charismatic movement has been active within the Roman Catholic Church. In the United States the Catholic Charismatic Renewal was focused in individuals like Kevin Ranaghan and others at the University of Notre Dame in Notre Dame, Indiana. Duquesne University in Pittsburgh, which was founded by the Congregation of the Holy Spirit, a Catholic religious community, began hosting charismatic revivals in 1977.

In a foreword to a 1983 book by Léon Joseph Cardinal Suenens, at that time the Pope's delegate to the Catholic Charismatic Renewal, the Prefect comments on the Post Second Vatican Council period stating,

At the heart of a world imbued with a rationalistic skepticism, a new experience of the Holy Spirit suddenly burst forth. And, since then, that experience has assumed a breadth of a worldwide Renewal movement. What the New Testament tells us about the Charisms — which were seen as visible signs of the coming of the Spirit — is not just ancient history, over and done with, for it is once again becoming extremely topical.

to those responsible for the ecclesiastical ministry — from parish priests to bishops — not to let the Renewal pass them by but to welcome it fully; and on the other (hand) ... to the members of the Renewal to cherish and maintain their link with the whole Church and with the Charisms of their pastors.[18]

In the Roman Catholic church, the movement became particularly popular in the Filipino, Korean, and Hispanic communities of the United States, in the Philippines, and in Latin America, mainly Brazil. Travelling priests and lay people associated with the movement often visit parishes and sing what are known as charismatic masses. It is thought to be the second largest distinct sub-movement (some 120 million members) within global Catholicism, along with Traditional Catholicism.[19]

A further difficulty is the tendency for many charismatic Catholics to take on what others in their church might consider sacramental language and assertions of the necessity of "Baptism in the Holy Spirit," as a universal act. This causes difficulty as there is little to distinguish the "Baptism" from the sacrament of confirmation.[20] In this regard, a Study seminar organized jointly in São Paulo by the Pontifical Council for Promoting Christian Unity and the Bishops Conference of Brazil raised these issues. Technically, among Catholics, the "Baptism of the Holy Spirit" is neither the highest nor fullest manifestation of the Holy Spirit.

Thus "Baptism of the Spirit" is one experience among many within Christianity (as are the extraordinary manifestations of the Spirit in the lives of the saints, notably St. Francis of Assisi and St. Teresa of Avila, who levitated), and thus less dogmatically held by Catholic charismatics (than by Pentecostals).[21] Possibly, Padre Pio (now St. Pio) provides a modern-day Catholic example of this experience. Describing his confirmation, when he as 12 year old, Padre Pio said that he "wept with consolation" whenever he thought of that day because "I remember what the Most Holy Spirit caused me to feel that day, a day unique and unforgettable in all my life! What sweet raptures the Comforter made me feel that day! At the thought of that day, I feel aflame from head to toe with a brilliant flame that burns, consumes, but gives no pain." In this experience, Padre Pio said he was made to feel God's "fullness and perfection." Thus a case can be made that he was "baptized by the Spirit" on his confirmation day in 1899. It was one spiritual experience among many that he would have.[22]

The Compendium to the Catechism of the Catholic Church states:

160. What are Charisms? 799–801. Charisms are special gifts of the Holy Spirit which are bestowed on individuals for the good of others, the needs of the world, and in particular for the building up of the Church. The discernment of charisms is the responsibility of the Magisterium.

The charismatic movement has not exerted the same influence on the Orthodox Church that it has on other mainstream Christian denominations. Individual priests, such as Fr. James Tavralides, Fr. Constantine Monios and Fr. David Buss, Fr. Athanasius Emmert of the Antiochian Orthodox Christian Archdiocese, Fr. Eusebius Stephanou of the Greek Orthodox Archdiocese of North America, founder of the Brotherhood of St. Symeon the New Theologian and editor of "The Logos", and Fr. Boris Zabrodsky of the Ukrainian Orthodox Church in America, founder of the Service Committee for Orthodox Spiritual Renewal (SCOSR) which published the Theosis Newsletter, were some of the more prominent leaders of the Charismatic Renewal within Orthodoxy.

A minority of Seventh-day Adventists today are charismatic. They are strongly associated with those holding more "progressive" Adventist beliefs. In the early decades of the church charismatic or ecstatic phenomena were commonplace.[23][24]

+ John and Elizabeth Sherill, They Speak With Other Tongues, Chosen Books, 2011.