Charles Francis Hurley was born in Cambridge, Massachusetts, to John and Elizabeth (Maker) Hurley. He attended public schools in Cambridge, then Boston College High School, and the studied for two years at Boston College. He became a salesmen for athletic goods, and entered the United States Navy in the First World War, serving in a radio intelligence unit stationed at Harvard University. After the war Hurley entered the real estate business, in partnership with James M. Conley. In 1924 he married Conley's daughter Marion; the couple had five children.[1]

Hurley's entry into politics was in 1919, when he won election to the Cambridge school committee, on which he served until 1931. Governor Hurley's administration was a brief departure from the increasing ethnic conflict between Yankee Protestants and Irish-American Catholics in political machines, party control, and business influence which had marked the state's early 20th century history. In 1930 he ran as a Democrat for the position of Massachusetts State Treasurer, winning three consecutive two-year terms.[1] In 1936 he won the nomination for Governor (James Michael Curley, the Democratic incumbent, was seeking a Senate seat), and then won the general election, defeating Republican John W. Haigis.

As a result of immigration in the late 19th and early 20th century, the predominant power of the native American classes had first eroded in Boston and then the state with brief checks and restoration of Yankee power in the interim. While Irish immigration had been reduced to a trickle with the Immigration Act of 1924 further immigration was negligible and the state turned to a process of assimilation and competition between the two groups for remaining power. Hurley represented the more legitimate side to Irish American politics and he attempted to prove the Americanization of his ethnic community by turning away from ethnic spoils which had marked his previous predecessors. Included amongst his program of cleaning up the civil service were the regulation of labor practices and emphasis on individual rights. 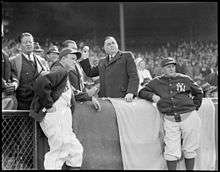 During Governor Hurley's administration the Fair Trades Laws were passed which regulated the use of private police in strikes, imposed a minimum wage for women and children, and further regulated industrial work. While these practices endeared him to both ethnic groups, his administration also marked a departure from past practices with its increasing liberalism. Although both Yankee and Irish American voters had favored it, he vetoed a law to require teachers to take loyalty oaths. Additionally he raised the ire of Georgia's Governor Eurith D. Rivers by refusing to extradite James Cunningham who had escaped from a Georgia chain gang thirteen years earlier. Hurley further upset Yankee and Irish interests which had a long tradition of local representative democracy when he also approved a fifth form of municipal government in Massachusetts, called Plan E. This allowed for an appointed city manager and a city council drawn from a proportional representation of the vote, rather than a collection of majority elected precinct candidates. Yankee interests in several cities, such as Boston, had cherished their old Charter government from both historical precedence and the ability of ward representatives in protecting their interests in the majority Irish American city. The later in turn had long used the form of government in defending their interests when they were a minority and saw its abolition as a direct threat to their way of conducting business.

Faced with a reinvigorated Yankee political machine and a loss of support amongst his own constituents, particularly the still powerful Irish mob, Hurley was denied reelection when former Governor Curley won the 1938 Democratic gubernatorial nomination.

The Charles F. Hurley Building in Boston's Government Center complex is named after him.