Eugene Noble Foss (September 24, 1858 – September 13, 1939), was an American politician and businessman from Massachusetts. Foss controlled a Boston-based industrial ventilation equipment manufacturer, and was active in both the Republican and Democratic parties. He was briefly a member of the United States House of Representatives, and served as the 45th Governor of Massachusetts (1911–13). He was generally pro-business and anti-labor, but was in favor of reduced tariffs, particularly for trade with Canada.

Eugene Noble Foss was born on September 24, 1858, to George Edmund Foss and Marcia (Noble) Foss in West Berkshire, Vermont, a small town near the Canada–US border. Foss's father was a politically active manager at the St. Albans Manufacturing Company. The family moved to St. Albans when he was ten. Foss was educated in local schools, and then attended Franklin County Academy before enrolling in the University of Vermont. He left the university after two years to pursue business interests. Foss's brother, George Edmund Foss, became a lawyer and politician in Illinois.

Foss first worked as a traveling salesman, selling lumber-drying technology developed at his father's company to companies further west. He was also retained by the B. F. Sturtevant Company of Boston to sell its mill-related equipment. His success in this role prompted Benjamin F. Sturtevant, the latter company's owner, to offer Foss a management job at Boston facilities in 1882. The company, which started out producing industrial ventilation equipment, diversified into other industrial equipment. Foss married Sturtevant's daughter Lilla on June 12, 1884, and became the company president after his father-in-law died in 1890. Under Foss's stewardship the company expanded, opening offices in other countries. He resigned as president in 1909 to pursue political activities. 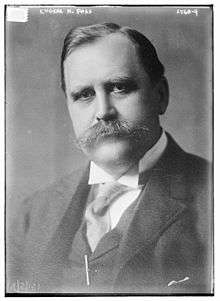 Foss was politically a Republican for many years, but was an advocate of reciprocity (the lowering of tariffs with neighboring Canada), which many Republicans opposed. This position had popular support, because the tariffs were in part responsible for the high price of coal, on which the state was dependent for heat. He won nomination to a "safe seat" in 1902, and attempted to upset the party establishment from its strong pro-tariff position. This effort was squelched by party leaders (Senator Henry Cabot Lodge and Governor Winthrop Murray Crane), and Foss lost the election.[1] He ran again in 1904, with an even more embarrassing defeat.[2] He next failed in a bid for the Republican nomination for lieutenant governor in 1906.

During the tenure of Governor Eben Sumner Draper (first elected in 1908), divisions within the state Republican Party deepened, and tariff reform was one of the dividing factors.[3] This position prompted Foss to bolt the party, and he bought his way onto the Democratic Party ticket as its nominee for lieutenant governor in 1909; the Republicans won the election by a narrow margin.[4] In March 1910 he finally gained office, winning a special election to a seat in the United States House of Representatives, filling a vacancy caused by the death of William C. Lovering.[5][6]

Foss then announced his intention to contend for the Democratic nomination for governor. The nominating convention was a contentious affair, with old-line labor Democrats opposing his nomination. Labor agitators criticized Foss for opposing bills that reduced maximum working hours, and supporting pro-business bills such as that authorizing the merger of the Boston and Maine Railroad with the New York, New Haven and Hartford Railroad. The convention deadlocked on the second ballot, between Foss and the previous year's nominee, James Vahey.[7] There were fistfights on the floor, chairs were thrown, and the convention ended up appointing a committee to choose a nominee. The committee also deadlocked, this time between Foss and Charles Sumner Hamlin. At this point, Foss announced that he intended to run regardless, and essentially demanded the party ratify his nomination. It eventually was, in a mail election that he won by a single vote over Hamlin.[8] In the general election, labor Democrats attacked Draper's anti-labor record, while Foss essentially campaigned against the pro-tariff stance of Senator Lodge. The Republicans called in Theodore Roosevelt, in an attempt to paint Draper in a more favorable light.[9] Foss won the election by 32,000 votes, but was the only Democrat to win a high office.[10]

Foss served three one-year terms, during which a series of reform measures were enacted. Foss signed measures covering employer liability and workmens' compensation, but alsov vetoed bills authorizing the tenure of school teachers and the right to picket. He signed an election reform bill changing primaries to direct elections, and a bill setting a minimum wage for women and children, and one allowing jury trials for cases involving the violation of strike injunctions.[11] He also promoted and signed bills that benefited his own businesses.[12] In 1911 he led a somewhat quixotic campaign to deprive Senator Lodge of his seat; his campaigning ended up having the opposite effect, essentially killing the chances of either Democrats or progressive Republicans to unseat Lodge.[13]

Foss denied clemency for Clarence Richeson for the sensationalized murder of Avis Linell.

By 1913 Foss' anti-labor policies had thoroughly disenchanted the state Democratic leadership, and Lieutenant Governor David I. Walsh announced that he would challenge Foss for the Democratic nomination. Foss received no support from the party, but was offered (and declined) the opportunity to contest for the Bull Moose Party nomination. He eventually took out papers for the Republican nomination, but failed to qualify for the primary ballot, and ended up running in the general election as an independent. It was a Democratic landslide, and Foss trailed far behind the other three candidates.

Afterwards Foss resumed his former manufacturing pursuits and managed his large real estate holdings in Boston. He died in Jamaica Plain, Massachusetts on September 13, 1939 and is interred in Forest Hills Cemetery.