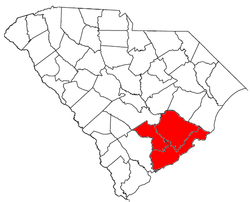 The Charleston metropolitan area is the metropolitan area centered on Charleston, South Carolina. The U.S. Office of Management and Budget designates the area as the Charleston–North Charleston, SC Metropolitan Statistical Area, a metropolitan statistical area used for statistical purposes only by the United States Census Bureau and other federal agencies. The OMB defines the area as comprising Berkeley, Charleston and Dorchester counties, an area with 664,607 in the 2010 census (though a July 1, 2012 estimate placed the population at 697,439).[1] Principal cities include Charleston, North Charleston, and Summerville. The area is commonly referred to as the Tri-County Area or the Lowcountry, though the latter term has historically referred to South Carolina coast in general.

Places with more than 100,000 inhabitants

Places with fewer than 1,000 inhabitants

During this period, the Weapons Station was the Atlantic Fleet's load out base for all nuclear ballistic missile submarines. Two SSBN "Boomer" squadrons and a sub tender were homeported at the Weapons Station, while one SSN attack squadron, Submarine Squadron 4, and a sub tender were homeported at the Naval Base. At the 1996 closure of the Station's Polaris Missile Facility Atlantic (POMFLANT), over 2,500 nuclear warheads and their UGM-27 Polaris, UGM-73 Poseidon, and UGM-96 Trident I delivery missiles (SLBM) were stored and maintained, guarded by a U.S. Marine Corps Security Force Company.