This article is about the federal agency. For the U.S. television show, see NCIS (TV series).

The United States Naval Criminal Investigative Service (NCIS) is the primary law enforcement agency of the United States Department of the Navy. Its primary function is to investigate criminal activities involving the United States Navy and U.S. Marine Corps, though its broad mandate includes national security, counter-intelligence, counter-terrorism, cyber warfare, and the protection of U.S. naval assets worldwide. NCIS is the successor organization to the former Naval Investigative Service (NIS), which was established by the Office of Naval Intelligence after the Second World War.

The vast majority of NCIS personnel are civilian, roughly half of whom are special agents trained to carry out a wide variety of assignments around the world. NCIS agents are armed federal law enforcement investigators, who frequently coordinate with other U.S. government agencies and have a presence in over 40 countries, as well as U.S. Navy vessels. NCIS special agents are supported by analysts and other experts skilled in disciplines such as forensics, surveillance, surveillance countermeasures, computer investigations, physical security, and polygraph examinations.

NCIS traces its roots to Navy Department General Order 292 of 1882, signed by William H. Hunt, Secretary of the Navy, which established the Office of Naval Intelligence (ONI). Initially, ONI was tasked with collecting information on the characteristics and weaponry of foreign vessels, charting foreign passages, rivers, or other bodies of water, and touring overseas fortifications, industrial plants, and shipyards.

In anticipation of the United States' entry into World War I, ONI's responsibilities expanded to include espionage, sabotage, and all manner of information on the U.S. Navy's potential adversaries. In World War II ONI became responsible for the investigation of sabotage, espionage and subversive activities that posed any kind of threat to the Navy.

NIS and the Cold War

The major buildup of civilian special agents began with the Korean War in 1950, and continued through the Cold War years. In 1966 the name Naval Investigative Service (NIS) was adopted to distinguish the organization from the rest of ONI, and in 1969 NIS special agents were reclassified from contract employees and became Excepted Civil Service.

In the early 1970s, an NIS special agent was stationed on the USS Intrepid (CV-11) for six months. This marked the beginning of the "Deployment Afloat" program, now called the Special Agent Afloat program, which deploys special agents for year-long assignments aboard carrier battle groups and amphibious readiness groups. In 1972, background investigations were transferred from NIS to the newly formed Defense Investigative Service (DIS), allowing NIS to give more attention to criminal investigations and counter-intelligence. The 1970s also saw NIS' first female agent, who was stationed at Naval Air Station Miramar, California in 1975.

In 1982, NIS assumed responsibility for managing the U.S. Navy's Law Enforcement and Physical Security Program and the U.S. Navy's Information and Personnel Security Program. Additionally, in 1982, two classes of NIS Special Agents were trained at the Federal Law Enforcement Training Center (FLETC) in Glynco, Georgia, in an assessment of the school's capability to train military investigators. Prior to this and subsequently until 1984, NIS Special Agent Training was in ONI Headquarters in Suitland, Maryland. In 1984, NIS Special Agents began training at FLETC, along with other federal investigative agencies, except for the Federal Bureau of Investigation, the Drug Enforcement Administration, and the United States Postal Inspection Service.

Two months after the October 1983 bombing of the Marine Barracks in Beirut, the agency opened the Navy Antiterrorist Alert Center (ATAC), a 24-hour-a-day operational intelligence center that issued indications and warnings on terrorist activity to Navy and Marine Corps commands. ATAC was the facility at which Jonathan Pollard was working when he committed the acts of espionage for which he was convicted in 1987. In 2002 the ATAC became the Multiple Threat Alert Center (MTAC).

In 1985, Cathal L. Flynn became the first admiral to lead NIS. The command took on the additional responsibility of Information and Personnel Security. In 1986, the Department of the Navy Central Adjudication Facility (DoN CAF) was established and placed under the agency, as the agency was now once again responsible for adjudicating security clearances (although not the actual investigations). DoN CAF renders approximately 200,000 eligibility determinations annually for the Department of the Navy.

In 1991, NIS was responsible for investigating the Tailhook scandal, which involved allegations of sexual misconduct and harassment by Naval and Marine Corps officers in Las Vegas, Nevada. Subsequent to this investigation, and at the direction of the chairman of the US Senate Armed Services Committee, Senator Sam Nunn, the Naval Investigative Service was restructured into the Naval Criminal Investigative Service (NCIS). The restructuring occurred as a result of perceived lapses in proper investigative technique over the Tailhook scandal, as well as chain of command issues and a lack of civilian oversight in previous investigations. At the time, Senator Nunn stated, "The Navy's whole investigative technique should be under serious question." As a result of the investigation into the Tailhook scandal, the Pentagon's inspector general was sharply critical of NIS leadership, stating that there was a top-down culture showing a lack of cooperation with other authorities in the Navy.[4] By 1992, Acting Secretary of the Navy, Sean O'Keefe, recommended the word "Criminal" be included in NIS's name in order to make clear their investigative function. Ultimately, NIS commander, Rear Adm. Duvall Williams Jr., was forced to retire and NIS was reorganized as NCIS under civilian leadership.[5] 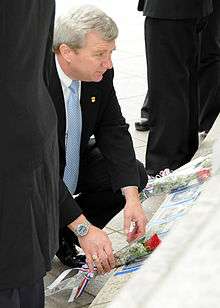 In 1999, NCIS and the Marine Corps Criminal Investigation Division (CID) signed a memorandum of understanding calling for an integration of Marine Corps CID into NCIS. (USMC CID continues to exist to investigate misdemeanors and felonies and other criminal offenses not under NCIS investigative jurisdiction.)[6]

A growing appreciation of the changing threat facing the Department of the Navy in the 21st century, culminating with the terrorist bombing of the USS Cole (DDG-67) in Yemen and the attacks on September 11, 2001, led NCIS to transform the Anti-terrorist Alert Center into the Multiple Threat Alert Center (MTAC) in 2002.

NCIS agents were the first U.S. law enforcement personnel on the scene at the USS Cole bombing, the Limburg bombing and the terrorist attack in Mombasa, Kenya. NCIS's Cold Case unit has solved 50 homicides since 1995—one of which was 33 years old.

NCIS has conducted fraud investigations resulting in over half a billion dollars in recoveries and restitution to the U.S. government and the U.S. Navy since 1997. NCIS investigates any death occurring on a Navy vessel or Navy or Marine Corps aircraft or installation (except when the cause of death is medically attributable to disease or natural causes). NCIS oversees the Master at Arms programs for the Navy, overseeing 8800 Masters-At-Arms and the Military Working Dog program. NCIS's three strategic priorities are to prevent terrorism, protect secrets, and reduce crime.

Jonathan Jay Pollard was an NIS analyst who was convicted of spying for Israel after being caught by NIS and FBI. He received a life sentence in 1987.[8]

On February 14, 2010, Mark D. Clookie became the fourth civilian Director of NCIS, having been appointed to the position by the Secretary of the Navy Ray Mabus.[3] Clookie leads an agency composed of some 2,500 civilian and military personnel that has a presence in over 150 locations world-wide. He is responsible for executing an annual operating budget of approximately $460 million.

In December 2012, the FBI released redacted documents regarding operations against Occupy Wall Street. In one FBI report, the NCIS is quoted as looking into links between Occupy and "organized labor actions" in December 2011.[9] 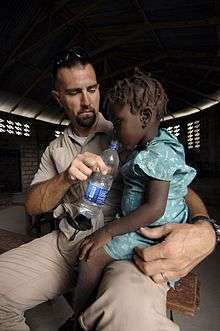 An NCIS special agent, assigned to the USS Kearsarge, gives a girl a drink of water during a medical assessment of a local village during hurricane relief operations in Haiti in 2008.

The Special Agent Afloat Program of NCIS sends NCIS Special Agents aboard U.S. aircraft carriers and other ships (for example, hospital ships and amphibious assault ships).[10] The purpose of the program is to provide professional investigative, counterintelligence, and force protection support to deployed Navy and Marine Corps commanders. These special agents are assigned to aircraft carriers and other deployed major combatants. Their environment can best be described as a "floating city." The assignment offers many of the same investigative challenges found by any criminal investigator working in a metropolitan city. A special agent assigned to a carrier must be skilled in general criminal investigations including: crime scene examination, expert interview techniques, and use of proactive law enforcement procedures to stop criminal activity before it occurs. The special agent afloat also provides guidance on foreign counterintelligence matters, including terrorism. It is also the mission of the special agent afloat to offer Navy and Marine Corps leadership advice and operational support on security issues which might threaten the safety of ships, personnel and resources.

The current standard issue pistol of NCIS is the SIG Sauer P229R DAK or SIG Sauer P239 DAK in .40 S&W.[11] Agents may also qualify with a weapon from an approved list of manufacturers in 9mm, 40S&W or 45 ACP.