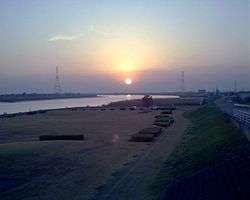 The upper reaches of the river are important to forestry, and the middle and lower reaches are important to local agriculture, providing irrigation to some 400 square kilometres (154 sq mi) of rice fields on the Tsukushi Plain. The river is also important to industry, with twenty electrical power plants located along its banks, as well as the major city of Kurume in Fukuoka Prefecture. Recognizing the requirement to satisfy divergent needs of various communities along the river, the Japanese Ministry of Land, Infrastructure, Transport and Tourism designated the Chikugo River (along with six other river systems in Japan) as a "Water Resources Development River System" with a comprehensive utilization plan to develop the river's resources.[1]

The Chikugogawa Onsen Fireworks, held annually on July 28, are the largest fireworks display in Kyūshū. The event has been held since 1650 on the riverbanks at Kurume.