Fukuoka Prefecture (福岡県, Fukuoka-ken) is a prefecture of Japan located on Kyūshū Island.[1] The capital is the city of Fukuoka.[2] 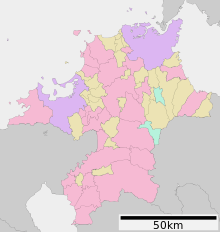 Fukuoka Prefecture faces the sea on three sides, bordering on Saga, Ōita, and Kumamoto prefectures and facing Yamaguchi Prefecture across the Kanmon Straits.

Fukuoka includes the two largest cities on Kyūshū, Fukuoka and Kitakyushu, and much of Kyūshū's industry. It also includes a number of small islands near the north coast of Kyūshū.

Fukuoka prefecture's main cities form one of Japan's main industrial centers, accounting for nearly 40% of the economy of Kyūshū. Major industries include automobiles, semiconductors, and steel. Fukuoka prefecture is noteworthy as the place where tire manufacturer Bridgestone and consumer electronics chain Best Denki were founded.

According to the latest Japanese population estimates (1 June 2013), population in Fukuoka Prefecture reached 5,088,483 inhabitants, making the prefecture the 9th most populated of Japan's 47 prefectures.

The sports teams listed below are based in Fukuoka.

Fukuoka Prefecture has the largest number of designated yakuza groups among all of the prefectures, at five; the Kudo-kai, the Taishu-kai, the Fukuhaku-kai, the Dojin-kai and the Kyushu Seido-kai.[8] Between 2004 and 2009, and in early 2011,[9] Fukuoka Prefecture leads the nation in gun-related incidents.[10] These incidents were mostly related to the local yakuza syndicates, specifically the Kudo-kai, the Dojin-kai and the Kyushu Seido-kai.[9]

Fukuoka Prefecture has had the highest frequency of youth crime among all of the prefectures of Japan since 2003.[11]

The most popular place for tourism is Fukuoka City, especially at the time of the Dontaku festival, and Dazaifu, although Kitakyūshū has also tried to attract tourists.

A sightseeing boat in Yanagawa Canal 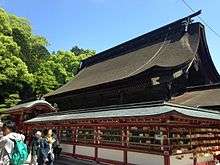