China has traditionally been the basketball powerhouse in Asia and has won the FIBA Asia Championship 14 out of 16 times from 1975 to 2005. 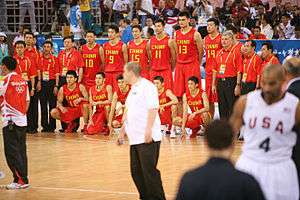 The national team has historically struggled against other top flight non-Asian teams. However, in recent years, China has shown they can beat the top European teams. In the 2004 Athens Olympics, China, coached by Del Harris, advanced to the final eight [4] after a 67–66 win over defending world champion Serbia and Montenegro.

At the 2006 FIBA World Championship, China, coached by Lithuanian Jonas Kazlauskas also advanced to the second round from Group D, earning two victories against Senegal and Slovenia in five group play matches before falling in the round of sixteen to the eventual silver medalists Greece, 95–64; the team's overall placing by the end of the tournament from amongst the twenty-four competing sides was fifteenth.[5]

In 2008, some questions surrounded whether the recently injured Yao Ming would still captain the squad. In mid-July, it was confirmed that he would still continue to be the captain.[6]

In recent years, the national team has faced major struggles with injuries. In 2008, top National Basketball Association prospect Xu Yong was forced to end his career at age 19 after being diagnosed with osteosarcoma.[7] In December 2010, Yao was diagnosed with a stress fracture in his left ankle – the injury is related to the ankle sprain that he suffered earlier that year. Speculations arose whether China's basketball icon would ever be able to play again.[8]

When Yao's retirement was finally announced in July 2011[9] it was considered a big blow to the national team, whose success had largely depended on the star player for many years. Yet, critics have been optimistic that China will continue to improve on its international performances.[10] Sure enough, in 2016, a new era of Chinese stars would begin to form, as new NBA draftees in Zhou Qi and Wang Zhelin would gain considerable amounts of attention for their successes in China.

Other current notable players from China:

Scroll down to see more.