The 2018 Asian Games (Indonesian: Pesta Olahraga Musim Panas Asia 2018), officially known as the XVIII Asiad, will be the 18th edition of a regional multi-sport event in Asia. It is to be hosted by Indonesia and is scheduled to take place from August 18 – September 2, 2018. Forty one sports and disciplines will be featured in the Games.[5] This will be the second time that Jakarta has hosted the Asian Games, the first being the 1962 Asian Games. For the first time in the Asian Games history, two cities will host the Games: Jakarta, the national capital city, and Palembang, the capital city of its South Sumatra province.[6] Bandung and three provinces that surround Jakarta and Palembang, Banten, West Java, and Lampung also plan to support the Games with their existing sporting venues.[7] Indonesia was approved as the host of the Games by Olympic Council of Asia executive board on September 19, 2014.[8] They will host the Games in 2018 rather than the originally planned 2019 to avoid conflict with the Indonesian presidential election.[9]

Originally Hanoi, Vietnam was chosen as the host.[10] However, that city ultimately withdrew due to financial considerations.[11]

The bidding process to host the 2018 Asian Games was not without controversy. Hanoi was originally selected to be the host after they won the bid against two other candidates, Surabaya and Dubai. They were awarded the winning bid on November 8, 2012, with 29 votes against Surabaya's 14 votes.[12] Dubai pulled out at the last minute, instead announcing their intention to focus on future bids. The UAE's National Olympic Committee's vice-president denied any pullout and claimed that Dubai "did not apply for hosting 2019 Asian Games" and had "only considered" doing so.[13][14] The Indonesian delegation claimed that Hanoi's victory was influenced by China's huge interest in the country.

However, in March 2014, there were some concerns about Vietnam's ability to host. These included concerns over whether the anticipated budget of US$150 million was realistic. There were claims that the government would eventually spend over US$300 million. In addition, critics were concerned that several stadiums built in conjunction with 2003 Southeast Asian Games had not been utilized since.[15] Former chairman of the Vietnam Olympic Committee Ha Quang Du also claimed that hosting the Asian Games would not boost tourism in Vietnam.[16]

On April 17, 2014, the Vietnamese Prime Minister Nguyen Tan Dung officially announced Hanoi's withdrawal from hosting. He cited unpreparedness and economic recession as the main reasons for the withdrawal, saying they ha left the country unable to afford the construction of facilities and venues.[11] Many Vietnamese people supported the decision to withdraw.[17] No penalty was imposed for the withdrawal.[18]

Appointment of Jakarta and Palembang

After Hanoi's withdrawal, the OCA said that Indonesia, China and the United Arab Emirates were major candidates under consideration to host.[19] Indonesia was widely regarded as a favourite, since Surabaya was the runner-up of the previous bid,[20] and willing to do so if selected.[21] The Philippines[22] and India expressed their interest about hosting the Games, but India failed to submit a late bid because it was unable to get an audience with Prime Minister Narendra Modi after being given an extended deadline by the OCA.[23]

On May 5, 2014, the OCA visited some Indonesian cities including Jakarta, Surabaya, Bandung, and Palembang. At this time Surabaya decided to drop their bid to host the Games and instead focus on hosting the already scheduled 2021 Asian Youth Games.[24] On 25 July 2014, during a meeting in Kuwait City, the OCA appointed Jakarta as the host of the Games with Palembang as the supporting host. Jakarta was chosen because of its well-equipped sport facilities, adequate transportation networks, and other facilities such as hotels and lodgings for guests. The Games were rescheduled from 2019 to 2018, because of the 2019 Indonesian presidential election.[25] On September 20, 2014, Indonesia signed the host city contract,[26] and during the closing ceremony of 2014 Asian Games in Incheon, Indonesia was appointed symbolically by the OCA to host the next Games.[27] 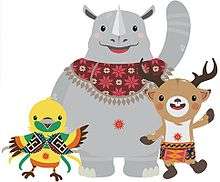 The initial logo was unveiled on September 9, 2015, on the country's National Sports Day. The logo depicts a cenderawasih, a rare species of a bird in Indonesia. This symbolises high hopes for the country’s sports at the quadrennial event.[28] Drawa, a bird-of-paradise, was unveiled as the initial mascot on 28 December 2015. However, after massive criticism over its old-fashioned and unattractive design,[29] the organizers abandoned the mascot and logo and ordered the Creative Economy Board (Badan Ekonomi Kreatif) to revise the design.

On 28 July 2016, a revised logo and new mascots were unveiled by Creative Economy Board (Badan Ekonomi Kreatif), the Indonesian Olympic Committee, and the Ministry of Youth and Sports of Indonesia (Kementerian Pemuda dan Olahraga). The new logo is based on the roof design of the Gelora Bung Karno Main Stadium that was built for 1962 Asian Games Jakarta, with eight paths leading to the stadium and the Olympic Council of Asia's shining sun emblem in the centre, reflecting the Energy of Asia that shines throughout Asia and the world.[30]

For the games, some venues will be built, renovated, and prepared across five provinces in Indonesia: Jakarta, South Sumatra, Banten, West Java, and Lampung. On 7 January 2015, it was announced that the athletes' village and aquatics center would be build in Kemayoran.[32] A media centre will also be built in the subdistrict that will serve together with Jakarta Convention Center.[33] The organisation hopes to keep the cost down by using the existing sports facilities and infrastructure, including those venues built for the 2011 Southeast Asian Games.[34] South Sumatra's provincial government claim that they are ready to hoar at least 18 sport disciplines with their existing Jakabaring Sport City complex. They will renovate some of rhw facilities in the complex, including a capacity upgrade of Gelora Sriwijaya Stadium from 36,000 to 60,000 seats. They will also lengthen the Jakabaring Lake to 2,300 meters.[35]

As part of the Games preparation, the construction of the Jakarta Mass Rapid Transit will be accelerated.[36] Palembang will also upgrade their transportation facilities by building 25 kilometres of monorail track from Sultan Mahmud Badaruddin II International Airport to Jakabaring Sport City.[37] Other transportation facilities such as underpasses, flyovers, and bridges will be also built in the city.[38] Sultan Mahmud Badaruddin II International Airport will expand the existing arrival and departure terminals, and also build a skybridge with a light rail transit (LRT) terminal that can take passengers to Jakabaring.[39]

The government has allocated a budget of IDR 3 trillion to prepare for the Games, with regional administrations also expected to supply some part of the funding.[34]

The 2018 Asian Games will feature 33 Olympic sports, including some additional sports as a test event for the 2020 Summer Olympics Tokyo, and also 8 non-Olympic sports.[42] For the first time, Pencak Silat and bridge will feature in the Games.[33][43]

Some concerns have been raised during the preparation for the Games, including: the number of sports played between Jakarta and Palembang, the location of the opening and closing ceremonies, the progress of the venues and athlete's village construction, the logo and mascot choice for the Games, and the possibility of hosting the Games without football since Indonesia is suspended by FIFA.

Muddai Madang, vice president of the Indonesian Olympic Committee (KOI), said that he feared the Olympic Council of Asia (OCA) could cancel Indonesia’s role as a host country in the Asian Games. He also criticized the Jakarta administration for not having started the tender process for cooperation contracts.[45]