For other uses, see Chinook.

Chinookan peoples include several groups of indigenous people of the Pacific Northwest in the United States who speak the Chinookan languages. In the early 19th century, the Chinookan-speaking peoples resided along the lower and middle Columbia River, now areas of present-day Oregon and Washington. In 1805 the Lewis and Clark Expedition encountered the Chinook tribe on the lower Columbia.[2]

Since the late 20th century, the Chinook Indian Nation, made up of 2700 members of several related peoples, has worked to obtain federal recognition. It gained this in 2001 from the Department of Interior under President Bill Clinton. After President George W. Bush was elected, his political appointees reviewed the case and, in a highly unusual action, revoked the recognition. The tribe has sought Congressional support for recognition by the legislature.[1]

The Chinookan peoples were relatively settled and occupied traditional tribal geographic areas, where they hunted and fished; salmon was a mainstay of their diet. The women also gathered and processed many nuts, seeds, roots and other foods. They had a society marked by social stratification, consisting of a number of distinct social castes of greater or lesser status.[3] Upper castes included shamans, warriors, and successful traders. They composed a minority of the community population compared to common members.[3] Members of the superior castes are said to have practiced social discrimination, limiting contact with commoners and forbidding play between the children of the different social groups.[4]

Some Chinookan peoples practiced slavery, a practice borrowed from the northernmost tribes of the Pacific Northwest.[5] They took slaves as captives in warfare, and used them to practice thievery on behalf of their masters. The latter refrained from such practices as unworthy of high status.[4]

The elite of some Chinookan tribes had the practice of head binding, flattening their children's foreheads as a mark of social status. They bound the infant's head under pressure between boards when the infant was about 3 months old and continued until the child was about one year of age.[6] This custom was a means of marking social hierarchy; flat-headed community members had a rank above those with round heads. Those with flattened skulls refused to enslave other persons who were similarly marked, thereby reinforcing the association of a round head with servility.[6] The Chinook were known colloquially by early white explorers in the region as "Flathead Indians."

Living near the coast of the Pacific Ocean, the Chinook were skilled elk hunters and fishermen. The most popular fish was salmon. Owing partly to their settled living patterns, the Chinook and other coastal tribes had relatively little conflict over land, as they did not migrate through each other's territories and they had rich resources in the natural environment. In the manner of numerous settled tribes, the Chinook resided in long houses. More than fifty people, related through extended kinship, often resided in one long house. 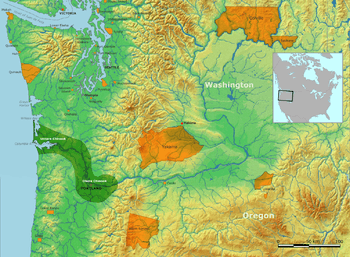 The Chinook peoples have long had a community on the lower Columbia River. They re-organized in the 20th century, setting up an elected form of government and reviving tribal culture. They first sought recognition as a federally recognized sovereign tribe in the late 20th century, as this would provide certain benefits for education and welfare. The Department of Interior's Bureau of Indian Affairs rejected their application in 1997.[7] Since the late 20th century, the Chinook Indian Nation has engaged in a continuing effort to secure formal recognition, conducting research and developing documentation to demonstrate its history. They are referred to in government and historic accounts, but never made a treaty with the government to cede land and establish a reservation, which would have meant automatic recognition.[8]

In 2001, the U.S. Department of Interior recognized the Chinook Indian Nation, a confederation of the Cathlamet, Clatsop, Lower Chinook, Whkaikum and Willapa Indians, as a tribe, according to its rules established in consultation with other recognized tribes. The tribe had documented continuity of their community over time on the lower Columbia. This recognition was announced during the last months of the administration of President Bill Clinton.[9]

The Chinook believe that the Quinault nation oppose their recognition because some members hold land on the timber-rich Quinault Indian Reservation in Grays Harbor County, Washington. The Quinault appealed recognition of the Chinook in August 2001, and the matter was taken up by the new administration.[7]

After President George W. Bush was elected, his new political appointees reviewed the Chinook materials. In 2002, in a highly unusual action, they revoked the recognition of the Chinook and of two other tribes also approved by the previous administration.[10] Efforts by Brian Baird, D-Wash. from Washington's 3rd congressional district, to gain passage of legislation in 2011 to achieve recognition of the tribe were not successful.[1]

The Chinook Indian Nation's offices are in Bay Center, Washington. The tribe holds an Annual Winter Gathering at the plankhouse in Ridgefield, Washington. It also holds an Annual First Salmon Ceremony at Chinook Point (Fort Columbia) on the North Shore of the Columbia River.[11] 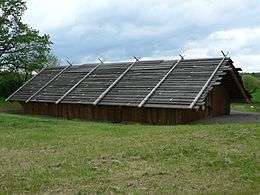 Cathlapotle Plankhouse, a full-scale replica of a Chinook-style cedar plankhouse erected in 2005 at the Ridgefield National Wildlife Refuge, which was once inhabited by more than 1200 Chinook people 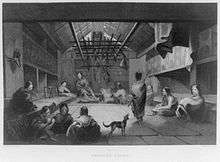 Illustration of the interior of a Chinookan plankhouse

In the 21st century, most Chinook live in the towns of Bay Center, Chinook, and Ilwaco in southwest Washington and in Astoria, Oregon.

Books written about the Chinook include the novel Boston Jane: An Adventure by Jennifer L. Holm