This article is about the title of Jesus. For other uses, see Christ the King (disambiguation).
See also: Kingdom of God (Christianity)
"Christ the Lord" redirects here. For the film produced under that title, see The Young Messiah (film).

Christ the King, a detail from the Ghent Altarpiece by Jan van Eyck.

Christ the King is a title of Jesus Christ. It refers to the concept of the Kingdom of God where the Christ is imagined as seated at the Right Hand of God [1] (as opposed to the secular title of King of the Jews mockingly given at the crucifixion).

The title "Christ the King" is also frequently used as a name for churches, schools, seminaries, hospitals and religious institutes.

The titles of "Christ" and "king" are not used together in the gospel, but "Christ" is in itself a royal title (i.e. "the anointed [king]"). In the Greek text, the Christ is explicitly identified as king (βασιλεύς) several times, so in Matthew 2:2 ("Where is the newborn king of the Jews?"). In John 18, Pilate refers to the implication that the Christ is a royal title by inquiring explicitly if Jesus claims to be the "king of the Jews" (βασιλεὺς τῶν Ἰουδαίων). Similarly, in John 1:49, a follower addresses Jesus as "the king of Israel" (ὁ βασιλεὺς τοῦ Ἰσραήλ).

Outside of the gospel, the First Epistle to Timothy (6:14–15) explicitly applies the phrase of "king of kings and lord of lords" (Βασιλεὺς βασιλέων καὶ κύριος κυρίων), taken from the Pentateuch (Deuteronomy 10:17) to Jesus Christ.

Pope Pius XI's first encyclical was Ubi arcano Dei consilio of December 1922. Writing in the aftermath of World War I, Pius noted that while there had been a cessation of hostilities, there was no true peace. He deplored the rise of class divisions and unbridled nationalism, and held that true peace can only be found under the Kingship of Christ as "Prince of Peace". "For Jesus Christ reigns over the minds of individuals by His teachings, in their hearts by His love, in each one's life by the living according to His law and the imitating of His example."[2]

Christ's kingship was addressed again in the encyclical Quas primas of Pope Pius XI, published in 1925. Michael D. Greaney called it "possibly one of the most misunderstood and ignored encyclicals of all time."[3] The pontiff's encyclical quotes with approval Cyril of Alexandria, noting that Jesus's kingship was given to him by the Father, and was not obtained by violence: "'Christ,' he says, 'has dominion over all creatures, a dominion not seized by violence nor usurped, but his by essence and by nature.'" He also referenced Leo XIII's 1899 Annum sacrum wherein Leo relates the Kingship of Christ to devotion to his Sacred Heart.[4]

Pope Pius XI instituted the feast of Christ the King in 1925 to remind Christians that their allegiance was to their spiritual ruler in heaven as opposed to earthly supremacy. Pope Benedict XVI remarked that Christ's kingship is not based on "human power" but on loving and serving others.[5]

The hymn "To Jesus Christ Our Sovereign King", was written by Msgr. Martin B. Hellrigel in 1941 to the tune "Ich Glaub An Gott".[6]

Feast of Christ the King 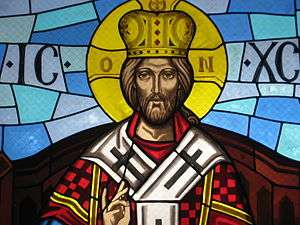 Stained glass window at the Annunciation Melkite Catholic Cathedral in Roslindale, Massachusetts, depicting Christ the King in the regalia of a Byzantine emperor
Main article: Feast of Christ the King

The Feast of Christ the King was instituted by Pius XI in 1925. It is celebrated by some Protestant denominations on the Sunday before the first Sunday of Advent.

Some traditionalist Catholics, who use pre-1970 versions of the General Roman Calendar, and the Anglican Catholic Church celebrate it instead on the last Sunday of October, the Sunday before All Saints' Day, which is the day that was assigned in 1925.

Many religious facilities are named in honor of Christ the King: 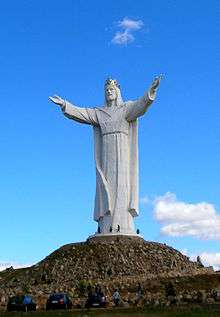 Statue of Jesus Christ in Świebodzin