Kingship and kingdom of God

For other uses, see Kingdom of Heaven (disambiguation).

Stained glass by Hallward depicting Matt 5:10: "Blessed are the poor in spirit: For theirs is the Kingdom of Heaven".

The concept of the kingship of God appears in all Abrahamic religions, where in some cases the terms Kingdom of God and Kingdom of Heaven are also used. The notion of God's kingship goes back to the Hebrew Bible, which refers to "his kingdom" but does not include the term "Kingdom of God".[1][2] Also, a Kingdom of the Gods is common in paganism such as Mount Olympus in Greek mythology or the phrase King of the Gods.

The "Kingdom of God" and its possibly equivalent form "Kingdom of Heaven" in the Gospel of Matthew is one of the key elements of the teachings of Jesus in the New Testament.[3] Drawing on Old Testament teachings, the Christian characterization of the relationship between God and humanity inherently involves the notion of the "Kingship of God".[4][5]

The term "kingdom of God" does not appear in the Hebrew Bible, although "his kingdom" and "your kingdom" are sometimes used when referring to God.[2] "Yours is the kingdom, O Lord" is used in 1 Chronicles 29:10-12 and "His kingdom is an everlasting kingdom" in Daniel 3:33, for example.[8]

"The Hebrew word malkuth [...] refers first to a reign, dominion, or rule and only secondarily to the realm over which a reign is exercised. [...] When malkuth is used of God, it almost always refers to his authority or to his rule as the heavenly King."[9] The "enthronement psalms" (Psalms 45, 93, 96, 97-99) provide a background for this view with the exclamation "The Lord is King".[5]

1 Kings 22:19, Isaiah 6, Ezekiel 1 and Daniel 7:9 all speak of the Throne of God, although some philosophers such as Saadia Gaon and Maimonides interpreted such mention of a "throne" as allegory.[10]

The phrase the Kingdom of God isn't common in intertestamental literature. Where it does occur, such as in the Psalms of Solomon and the Wisdom of Solomon, it usually refers "to God's reign, not to the realm over which he reigns, nor to the new age, [nor to ...] the messianic order to be established by the Lord's Anointed.[11]

The term does occasionally, however, denote "an eschatological event," such as in the Assumption of Moses and the Sibylline Oracles. In these cases, "God's Kingdom is not the new age but the effective manifestation of his rule in all the world so that the eschatological order is established."[12] Along these lines was the more "national" view in which the awaited messiah was seen as a liberator and the founder of a new state of Israel.[13]

In the Gospels, especially the Synoptic Gospels, Jesus speaks frequently of God's kingdom. However, Jesus never defines the concept.[16] "He assumed this was a concept so familiar that it did not require definition."[16] Karen Wenell wrote, "Mark's Gospel provides for us a significant place of transformation for the space of the Kingdom of God, precisely because it can be understood as a kind of birthplace for the Kingdom of God, the beginning of its construction ...".[17]

The Kingdom of God (and its possibly equivalent form Kingdom of Heaven in the Gospel of Matthew) is one of the key elements of the teachings of Jesus in the New Testament.[3] Drawing on Old Testament teachings, the Christian characterization of the relationship between God and humanity inherently involves the notion of the "Kingship of God".[4][5]

Most of the uses of the Greek word basileia (kingdom) in the New Testament involve Kingdom of God (or Kingdom of Heaven).[18] Matthew is likely to have instead used the term heaven because the background of his Jewish audience imposed restrictions on the frequent use of the name of God.[19] However, Dr. Chuck Missler asserts that Matthew intentionally differentiated between the kingdoms of God and Heaven: "Most commentators presume that these terms are synonymous. However, Matthew uses Kingdom of Heaven 33 times, but also uses Kingdom of God five times, even in adjacent verses, which indicates that these are not synonymous: he is using a more denotative term." [20] Kingdom of God is translated to Latin as Regnum Dei and Kingdom of Heaven as Regnum caelorum.[21] 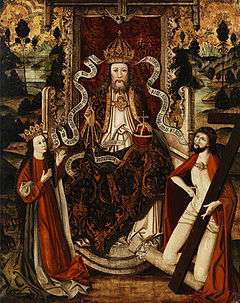 The Old Testament refers to "God the Judge of all" and the notion that all humans will eventually "be judged" is an essential element of Christian teachings.[22] Building on a number of New Testament passages, the Nicene Creed indicates that the task of judgement is assigned to Jesus.[22][23]

R. T. France points out that while the concept of "Kingdom of God" has an intuitive meaning to lay Christians, there is hardly any agreement among scholars about its meaning in the New Testament.[26] Some scholars see it as a Christian lifestyle, some as a method of world evangelization, some as the rediscovery of charismatic gifts, others relate it to no present or future situation, but the world to come.[26] France states that the phrase Kingdom of God is often interpreted in many ways to fit the theological agenda of those interpreting it.[26]

Further information: Divisions of the world in Islam

The term "kingdom of God" does not occur in the Quran. The modern Arabic word for kingdom is mamlaka (المملكة), but in the Quran mul'kan (مُّلْكًا), refers to Heaven, e.g. in 4:54 "Or do they envy mankind for what Allah hath given them of his bounty? but We had already given the people of Abraham the Book and Wisdom, and conferred upon them a great kingdom" and 6:75 "Thus did We show Abraham the kingdom of the heavens and the earth."[6]