Majerus competed at the 2012 Summer Olympics in the Women's road race, finishing 21st.[1] Majerus is one of the most dominant cyclist to come out of Luxembourg and is a current 23-time national champion, holding; ten time trial titles, seven cyclo-cross titles and six road race titles. 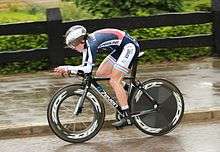 Majerus competing in the time trial at the 2013 Games of the Small States of Europe, at which she won all three women's cycling events