This is a Dutch name; the family name is van Moorsel, not Moorsel. 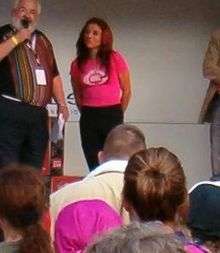 Van Moorsel started her career in 1977. She won major races both on the track, and on the road. In the first half of the 1990s, she won the Tour Féminin twice, after fierce competition with Jeannie Longo.

Van Moorsel dropped out of cycling in 1994 with anorexia nervosa[2] but recovered to compete at the World Championships in 1998, winning the time trial and coming second in the road race.

At the 2000 Summer Olympics in Sydney, van Moorsel won gold medals on the road (road race and time trial), and on the track (3 km pursuit). At the 2004 Summer Olympics, she fell in the penultimate lap of the road race,[3] but successfully defended her time trial title.

Her four gold medals tie her (with four others) for the most ever by a Dutch athlete at the Olympics.[4]

She set a new world hour record for women of 46.065 km, in 2003 in Mexico City,[5] which was not improved upon for almost 12 years, when UCI rule changes prompted a new succession of attempts.

Van Moorsel retired from professional cycling after the 2004 Olympics.