O'Connor was born in Knocknacarra, County Galway, near Salthill, in 1948, the son of Elizabeth (née Noone) and John O'Connor. The family farmed cattle and pigs near a golf club.[1]

He turned professional in 1967. The European Tour officially began in 1972, and O'Connor made the top hundred on the Order of Merit in each of its first twenty-one seasons, with a best ranking of seventh in 1975. He won four European Tour events. As a senior he has competed on both the European Seniors Tour and the U.S. based Champions Tour, and has won two Senior British Open titles (before it became one of the senior majors)[4] and two Champions Tour events.[5]

In 1992 O'Connor won the Dunhill British Masters at Woburn, his fourth and final European Tour victory, with scores of 71, 67, 66, 66. A weather-interrupted tournament meant that 36 holes had to be played on Sunday. At 44 years, O'Connor was the oldest player in the field.

O'Connor played in the Ryder Cup twice. In 1975 he was a member of a losing Great Britain & Ireland team and in 1989 he was part of a European team which tied the match to retain the trophy. His personal record was one win, three losses and no ties. His win over Fred Couples was best remembered for a stunning 2 iron shot on the last hole at The Belfry which he left just 4 feet from the hole.[6]

O'Connor was also active in golf course design, being involved in the design of at least 18 courses in Ireland, and many more abroad.[7] 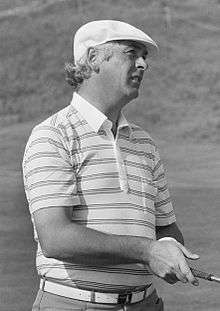 Note:O'Connor did not play in the U.S. Open or PGA Championship. DNP = Did not play CUT = missed the half-way cut "T" = tied Yellow background for top-10.