This article is about a senior golf tour. For the senior tennis tour, see Outback Champions Series and ATP Champions Tour. 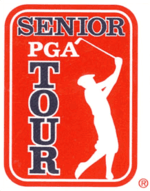 PGA Tour Champions (formerly the Senior PGA Tour and the Champions Tour) is a men's professional senior golf tour, administered as a branch of the PGA Tour.

The Senior PGA Championship, founded in 1937, was for many years the only high-profile tournament for golfers over 50. The idea for a senior tour grew out of a highly successful event in 1978, the Legends of Golf, which featured competition between two-member teams of some of the greatest older golfers of that day. The tour was formally established in 1980 and was originally known as the Senior PGA Tour until October 2002. The tour was then renamed the Champions Tour through the 2015 season, after which the current name of "PGA Tour Champions" was adopted.

Of the 26 tournaments on the 2010 schedule, all were in the United States except for the Senior Open Championship, a tournament in the Dominican Republic that started in 2008, and tournaments in Canada and South Korea starting in 2010. The guaranteed minimum official prize money is $51.5 million over 26 tournaments, with a record average purse of $1.98 million per event;[2] slightly higher than the 2008 prize money of $51.4 million over the same number of events.[3] The total prize money and number of events, however, are down from previous years—for example, the 2007 tour offered a total of $55.2 million over 29 events.[4]

Most of the tournaments are played over three rounds (54 holes), which is one round fewer than regular professional stroke play tournaments on the PGA Tour. Because of this and having smaller fields (81 golfers), there are generally no "cuts" between any of the rounds. However, the five senior majors have a full 72 holes (four rounds) with a 36-hole cut. A golfer's performances can be quite variable from one round to the next, and playing an extra round increases the likelihood that the senior majors will be won by leading players.

Through the 2015 season, the Charles Schwab Cup was a season-long points race. Points were given to players who finished in the top 10. One point was earned for each $1,000 won (i.e. $500,000 = 500 points) with majors counting double. From the Cup's inception in 1990 through 2015, the top 30 players competed in the season-ending Charles Schwab Cup Championship, which was contested over four rounds and where all contestants earned points. The top five finishers in the points race earned annuities.

In 2016, the format of the Charles Schwab Cup was radically changed to a playoff-style format similar to that used for the FedEx Cup on the main PGA Tour. Qualification for the playoffs is now based on money earned during the PGA Tour Champions season. The top 72 players on the money list automatically qualify for the first playoff event, the PowerShares QQQ Championship. Additionally, if one or more golfers finish in the top 10 in the final non-playoff event, the SAS Championship, and are not in the top 72 on the money list entering the playoffs, the highest such finisher in the SAS Championship will also receive a playoff place. The playoffs operate on a points system, with each qualifying player receiving a points total equal to the money earned on the season. Points during the first two playoff events, the QQQ Championship and Dominion Charity Classic, are also based on money earned, except that the winner of each of those events receives double points. The playoff field is cut to 54 for the Dominion Charity Classic, and finally to 36 for the Charles Schwab Cup Championship. After the Dominion Charity Classic, the field's points are reset so that each of the remaining 36 players can theoretically win the Charles Schwab Cup, and that each of the top five players can clinch the Charles Schwab Cup by winning the final event.[5]

In 2006, the Champions Tour Division Board of the PGA Tour organization voted to allow players the option to use golf carts during most events on the tour. The five major championships and certain other events, including pro-ams, are excluded.

Current PGA Tour Champions competitor and TV golf analyst Bobby Clampett has called the process for determining the field in tour events "the most complicated system known to man," and added that "[n]ot a single player even understands it fully."[6]

Clampett attempted to explain the process in a 2011 post on his blog. Standard tour events—apart from invitationals and majors, which have their own entry criteria—have a field of 78 (currently 81). The first 60 places in the field are filled as follows:[6]

This lists the final money leaders for the 2016 season.

Money winners and most wins leaders

The following players have won more than one money list title through 2016:

The table shows the top ten career money leaders on PGA Tour Champions through the 2016 season.

There is a full list on the PGA Tour's website here. The PGA Tour also publishes a list of PGA Tour Champions players' total career earnings on its three tours here. The top two players on that list are Vijay Singh and Davis Love III, who respectively became eligible for the circuit then known as the Champions Tour in February 2013 and April 2014. Singh has won a total of $71.0 million, but only played in six Champions Tour events in his first three years of eligibility, earning just over $400,000 on that tour.[8] Love has won $44.5 million in all, but only played in five Champions Tour events in his first two years of eligibility, earning slightly under $110,000; he won an event on the regular PGA Tour in 2015.[9] Among those who have played at least one full season on PGA Tour Champions, Kenny Perry is the all-time leader, with a total of $39.5 million, including $7.4 million in Champions Tour earnings since becoming eligible in October 2010.