This article is about the flower. For the children's picture book by Kevin Henkes, see Chrysanthemum (book). For the short story by John Steinbeck, see The Chrysanthemums.

Chrysanthemums (/krɪˈsænθəməm/), sometimes called mums or chrysanths, are flowering plants of the genus Chrysanthemum in the family Asteraceae. They are native to Asia and northeastern Europe. Most species originate from East Asia and the center of diversity is in China.[4] There are countless horticultural varieties and cultivars.

Wild Chrysanthemum taxa are herbaceous perennial plants or subshrubs. They have alternately arranged leaves divided into leaflets with toothed or occasionally smooth edges. The compound inflorescence is an array of several flower heads, or sometimes a solitary head. The head has a base covered in layers of phyllaries. The simple row of ray florets are white, yellow or red; many horticultural specimens have been bred to bear many rows of ray florets in a great variety of colors. The disc florets of wild taxa are yellow. The fruit is a ribbed achene.[7] Chrysanthemums, also known as ‘mums’, are one of the prettiest varieties of perennials that start blooming early in the fall. This is also known as favorite flower for the month of November.[8] 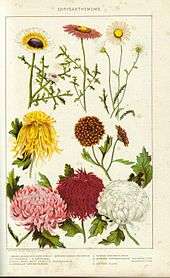 Historical painting of chrysanthemums from the New International Encyclopedia, 1902

Chrysanthemums were first cultivated in China as a flowering herb as far back as the 15th century BC.[9] Over 500 cultivars had been recorded by the year 1630.[7] The plant is renowned as one of the Four Gentlemen in Chinese and East Asian art. The plant is particularly significant during the Double Ninth Festival. The flower may have been brought to Japan in the eighth century AD, and the Emperor adopted the flower as his official seal. The "Festival of Happiness" in Japan celebrates the flower.

Chrysanthemums entered American horticulture in 1798 when Colonel John Stevens imported a cultivated variety known as 'Dark Purple' from England. The introduction was part of an effort to grow attractions within Elysian Fields in Hoboken, New Jersey.[10] 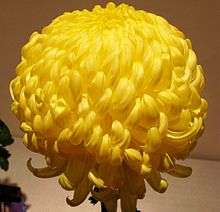 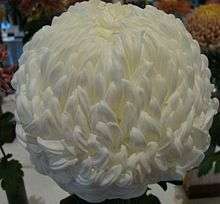 Modern cultivated chrysanthemums are showier than their wild relatives. The flower heads occur in various forms, and can be daisy-like or decorative, like pompons or buttons. This genus contains many hybrids and thousands of cultivars developed for horticultural purposes. In addition to the traditional yellow, other colors are available, such as white, purple, and red. The most important hybrid is Chrysanthemum × morifolium (syn. C. × grandiflorum), derived primarily from C. indicum, but also involving other species.

Over 140 varieties of chrysanthemum have gained the Royal Horticultural Society's Award of Garden Merit.

Chrysanthemums are divided into two basic groups, garden hardy and exhibition. Garden hardy mums are new perennials capable of wintering in most northern latitudes. Exhibition varieties are not usually as sturdy. Garden hardies are defined by their ability to produce an abundance of small blooms with little if any mechanical assistance, such as staking, and withstanding wind and rain. Exhibition varieties, though, require staking, overwintering in a relatively dry, cool environment, and sometimes the addition of night lights.

The exhibition varieties can be used to create many amazing plant forms, such as large disbudded blooms, spray forms, and many artistically trained forms, such as thousand-bloom, standard (trees), fans, hanging baskets, topiary, bonsai, and cascades.

Irregular incurves are bred to produce a giant head called an ogiku. The disk florets are concealed in layers of curving ray florets that hang down to create a 'skirt'. Regular incurves are similar, but usually with smaller blooms and a dense, globular form. Intermediate incurve blooms may have broader florets and a less densely flowered head.

In the reflex form, the disk florets are concealed and the ray florets reflex outwards to create a mop-like appearance. The decorative form is similar to reflex blooms, but the ray florets usually do not radiate at more than a 90° angle to the stem.

The pompon form is fully double, of small size, and very globular in form. Single and semidouble blooms have exposed disk florets and one to seven rows of ray florets.

Chrysanthemum leaves are steamed or boiled and used as greens, especially in Chinese cuisine. The flowers may be added to thick snakemeat soup (蛇羹) to enhance the aroma. Small chrysanthemums are used in Japan as a sashimi garnish.

Pyrethrum (Chrysanthemum [or Tanacetum] cinerariaefolium) is economically important as a natural source of insecticide. The flowers are pulverized, and the active components, called pyrethrins, which occur in the achenes, are extracted and sold in the form of an oleoresin. This is applied as a suspension in water or oil, or as a powder. Pyrethrins attack the nervous systems of all insects, and inhibit female mosquitoes from biting. In sublethal doses they have an insect repellent effect. They are harmful to fish, but are far less toxic to mammals and birds than many synthetic insecticides. They are not persistent, being biodegradable, and also decompose easily on exposure to light. Pyrethroids such as permethrin are synthetic insecticides based on natural pyrethrum.

Chrysanthemum plants have been shown to reduce indoor air pollution by the NASA Clean Air Study.[11]

In some countries of Europe (e.g., France, Belgium, Italy, Spain, Poland, Hungary, Croatia), incurve chrysanthemums are symbolic of death and are used only for funerals or on graves, while other types carry no such symbolism; similarly, in China, Japan and Korea, white chrysanthemums are symbolic of lamentation and/or grief. In some other countries, they represent honesty.[12] In the United States, the flower is usually regarded as positive and cheerful,[13] with New Orleans as a notable exception.[14]

Imperial Standard of the Emperor of Japan

Chrysanthemum shows have been traditionally held in many towns.[20]