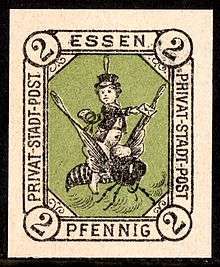 An 1887 local stamp of Essen. Just one of the sort of stamps that members of the CSC collect.

The Cinderella Stamp Club was founded on 5 June 1959 in London, England, and is an association of philatelists, amateur and professional, whose interests lie in local stamps, telegraph stamps, railway stamps, revenue stamps, fiscals, forgeries, bogus and phantom issues, Christmas, Red Cross, TB and other charity seals, registration labels, advertisement and poster stamps and many other items - all of which are the so-called "Cinderellas of Philately".

The club publishes a quarterly journal, The Cinderella Philatelist and at the end of 2008 had a membership of nearly 500, of which over 150 were outside the UK.[1]

The major stamp catalogues do not usually list cinderella stamps, except in the back of the book and the club has published many works of reference, often written by members, on areas where little else has been written. The diverse subjects have included the philately of the British Empire Exhibition and the Red Cross Vignettes of Gaston Fontanille, or Delandre as he preferred to be called.

Notable members include the brothers Charles and Francis Kiddle.

This article is issued from Wikipedia - version of the 1/25/2016. The text is available under the Creative Commons Attribution/Share Alike but additional terms may apply for the media files.