This article describes the police force for the square-mile sized district known as the City of London. For the force covering the rest of Greater London, see Metropolitan Police Service.

The City of London Police is the territorial police force responsible for law enforcement within the City of London, including the Middle and Inner Temples. The force responsible for law enforcement within the remainder of Greater London, outside of the City, is the Metropolitan Police Service, a separate organisation. The City of London, which is now primarily a financial business district with a small resident population but a large commuting workforce, is the historic core of London, and has an administrative history distinct from that of the rest of the metropolis, of which its separate police force is one manifestation.

The City of London area has a resident population of around 9000.[2] There is a daily influx of approximately 400,000 commuters into the City, along with thousands of tourists.[3]

The police authority is the Common Council of the City, and unlike other territorial forces in England and Wales there is not a police and crime commissioner replacing that police authority by way of the Police Reform and Social Responsibility Act 2011,[4] but like a police and crime commissioner, the Common Council is elected, thus achieving the same aim of democratic accountability.

With 1,173 employees, including 699 full-time police officers, 61 special constables and 15 police community support officers,[5] and three police stations (at Wood Street (also the headquarters), Snow Hill, and Bishopsgate), the City of London Police is the smallest territorial police force in England and Wales, both in terms of geographic area and head-count.[6] The Commissioner since January 2016 is Ian Dyson, QPM, who was formerly the force's Assistant Commissioner.

History of policing in the City of London

Policing in the City of London has existed since Roman times. Wood Street police station, also headquarters of the City Police, is built on part of the site of a Roman fortress, which may have housed some of the first police in the City.[7]

Prior to 1839, the responsibility for policing in the City was divided, from the medieval period, between day and night City Watch, primarily under the two Sheriffs. Responsibilities were shared with the Alderman's officers the Ward Beadles who are now purely ceremonial. It was these officers' responsibility for ensuring the Night Watch was maintained. Policing during the day eventually came under the City Patrol, which evolved into the City Day Police, which was modelled on the Metropolitan Police. In 1838, the Day Police and Night Watch were merged into a single organisation. The passing of the City of London Police Act 1839 gave statutory approval to the force as an independent police body, heading off attempts made to merge it with the Metropolitan Police.[8]

During 1842, the City Police moved its headquarters from Corporation's Guildhall to 26 Old Jewry, where it remained until it was relocated to Wood Street in 2002.[7]

A main challenge of policing in London prior to the 18th century was both gathering and transferring accurate information. Data accumulated each time an offender appeared in court, sometimes as a new suspect, but oftentimes they were repeat offenders labeled as ‘ancient’, ‘common’, ‘known’, ‘notorious’, or ‘old’ offenders. Records were brought to court and often transferred between authorities, with one example being from the Guildhall bookhouse to Bridewell. The records were closely screened and had to otherwise remain in buildings like Guildhall bookhouse, to ensure the accuracy of the information being held. Aside from these formal records, information also traveled between officials through word of mouth. This type of circulation of knowledge occurred between marshals, beadles, warders, and other officers, and many Londoners could be identified by these individuals through local knowledge of their crimes – ‘a very lewd thief’ or ‘daungerous person’ are some common descriptions. Constables were also an important part of police knowledge. Within courtrooms, constables provided valuable information on specific criminals or neighborhoods. Even so, many cases counted on the reliability of individuals with knowledge in London. Development of sophisticated investigative techniques would come later.[9]

The Agas map can be used to display connections between early London buildings such as Guildhall bookhouse and Bridewell.

Tracking the total number of Londoners also fell under pre-Victorian London policing duties. Beadles kept the names and surnames of householders in an effort to track this total. This allowed police to understand more about which areas of London were growing, the number of aliens in particular areas, and other valuable demographic information.[9]

In the twentieth century, after the Jack the Ripper murders in London, policing received another overhaul in investigative techniques after they were unable to identify the murderer. In 1902, Henry Jackson was the first British person to be convicted using fingerprinting techniques, a large change from knowledge gathering methods used centuries earlier. However, it was not until 1905 that fingerprinting began to take hold as a procurement method.[10]

The Metropolitan Police has taken policing knowledge in London much further in modern times. Inclusion of new technologies, such as faster facial recognition software and cell phone tracking, has enabled police knowledge to develop at rapid rates, even warranting privacy concerns amongst some Londoners.[11] However, when looking at formal policies on policing according to the Metropolitan Police, transference of knowledge, while easier, has become stricter. Legal compliance, data quality, and informational sharing agreement/protocols have become new barriers, alongside records management that still remains from days of early London policing knowledge.[12]

The City Police is organised into five Basic Command Units:[13]

Because of the City's role as a world financial centre, the City of London Police has developed a great deal of expertise in dealing with fraud and "is the acknowledged lead force within the UK for economic crime investigation."[14] The Economic Crime Directorate includes: 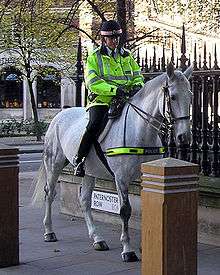 Their helmet has altered little since its introduction in 1865 and has a crest instead of the white metal boss worn on the Metropolitan Police helmet. The "helmet plate" or badge is the City of London coat of arms; this is unique for a police force in England and Wales in that it does not include the St Edward's Crown, neither does it have the Brunswick Star, which is used on most other police helmets in England and Wales.[16]

On State and ceremonial occasions the Commissioner and his deputy wear a special Court Dress Uniform with a gold aiguillette and a cocked hat adorned with white swan's feathers; other than on these occasions, they wear standard uniform.[17]

Like other UK police forces, City of London police officers are not routinely armed. The force has small pool of AFO's to deal with firearms incidents in the city. However all (except PCSO's) officers are equipped with Hiatt Speedcuffs, ASP batons and CS incapacitant spray. Many officers are also equipped with the TASERX26 electroshock weapon.

The City of London Police warrant card badge[18] is the city shield enamelled in red and white. The City motto Domine Dirige Nos (Lord Guide Us) in gold on a black scroll above the words "City of London Police". Two Tudor dragons surround the shield. These are often mistaken for griffins but in fact reflect the heraldic supporters of the City's arms. The warrant number is printed below and the word "police" is written beneath that in braille (courtesy of blind former Home Secretary David Blunkett).

The ranks from constable to chief superintendent are the same as all other British police forces. The three senior ranks are similar to those used by the Metropolitan Police.

Constables and Sergeants display collar numbers on their rank badges (in the range 1 to 150 for Sergeants and 151 to 999 for Constables). Officers between the ranks of Inspector and Chief Superintendent (who do not have collar numbers) display their warrant numbers instead.

The majority are attached to the Uniformed Policing Directorate (led by a Special Superintendent, who forms part of that directorate's management team, assisted by three Special Inspectors and a number of Special Sergeants), and undertake duties during evenings and nights in support of the regular force in dealing with issues arising from the busy night-time economy of the City. However, other officers perform more specialist roles in the force's other directorates, including fraud investigation in the Economic Crime Directorate and control room operation in the Intelligence and Information Directorate. Many officers have specialist training (which is often more readily available to special constables than in other forces) and perform duties as response drivers, "Level 2" public order officers and cycle officers.

As in all forces, special constables are expected to commit to a minimum of 200 hours' duty each year, and in return receive out-of-pocket expenses and free travel on the Transport for London network. They receive no pay.

Officers switched to regular rank titles in 2006 (having previously used distinct titles such as "Section Officer" and "Divisional Officer"), and to regular rank insignia in 2013. The CLSC is led by the Chief Officer (currently Special Commander Ian Miller, MBE), three Special Superintendents, four Special Inspectors and a number of Special Sergeants. (The rank of Special Chief Inspector, as shown in the table above, is available but not currently in use.)

Uniform and equipment is identical to that of regular (full-time) police officers. Officers of the Honourable Artillery Company Detachment of Special Constabulary (which forms part of the CLSC) wear the title "HAC" when in formal uniform.[20] Special Constables have four-digit collar numbers beginning 11 or 12, and Special Sergeants have four-digit collar numbers beginning 10.

The CLSC were awarded the Ferrers Trophy in 2006 for the efforts of their officers after the 7 July 2005 London bombings. The award is given annually to police volunteers, for exceptional dedication and innovation. It was the first time in the award's history that an entire Special Constabulary received the trophy.

It has no independent marine capacity, and so relies on the Metropolitan Police Marine Policing Unit when its operational needs require such capacity.

Like all other forces in England and Wales, it relies on the National Police Air Service for its airborne capacity.

Officers killed in the line of duty

See also: List of British police officers killed in the line of duty

The Police Roll of Honour Trust lists and commemorates all British police officers killed in the line of duty. The Police Memorial Trust since its establishment in 1984 has erected over 38 memorials to some of those officers.

Since 1900 the following officers of the City of London Police were killed while attempting to prevent or stop a crime in progress:[21] 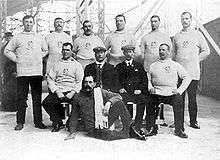 The gold medal winning City of London Police team at the 1908 Summer Olympics.

Teams of the City of London Police participated in the Olympic games three times in the tug of war tournament. At the 1908 Summer Olympics they won the gold medal, beating a team of the Liverpool Police in the final. In 1912 the team was beaten in the final by one of the Stockholm Police. At the 1920 Summer Olympics the team regained its title, beating the Netherlands. This was the last time tug of war was an Olympic sport, which means the City of London Police is still the reigning Olympic champion.[22][23]

The City of London Police Museum is dedicated to the police force and is located in the headquarters on Wood Street.[24] Exhibits include uniforms, Victorian-era police equipment and artefacts, communication devices, World War II displays, and exhibits about Jack the Ripper and other famous murder cases.

The museum relocated in November 2016 to the space formerly used by the Clockmakers' Museum, next to the Guildhall Library.[25] The new museum was funded by a Heritage Lottery Fund grant.[26]