Merseyside Police is the territorial police force responsible for policing Merseyside in North West England. The service area is 647 square kilometres with a population of around 1.5 million. As of March 2009 the service has 4,494 police officers, 2,221 staff, 442 police community support officers and 420 special constables.[4] The service operates under the oversight of the Police and Crime Commissioner, Jane Kennedy. A proposal to merge the force with the Cheshire Constabulary to form a strategic police force was made by the Home Secretary on 6 February 2006[5] but later abandoned.

Merseyside Police is divided into five Basic Command Units (BCUs), one in each of the metropolitan boroughs that make up Merseyside. The BCUs are:

There are many different departments that make up Merseyside Police. These include the Matrix Disruption Team and, formerly, the Anti-Social Behaviour Taskforce.

The Matrix Disruption Team led by a Chief Inspector, consists of syndicates made up of Inspectors, Sergeants and Constables. Each syndicate works with other Matrix units to provide the force with a level two response to gun crime, faction based criminality and cash-in-transit robberies. They are the first response to any major large-scale disorder within the Merseyside force area. These officers are specifically trained to deal with a variety of disorder situations, ranging from small protests to large-scale crowd disorder.

Public order is one of the main functions of the department and therefore all officers receive the required training and are subjected to rigorous training scenarios. Matrix has a number of baton gun trained specialist officers: two Sergeants and ten Constables.

The Matrix team also have specialist search teams and rope access teams. They use yellow Mercedes Sprinter police vans with special markings on the side to show they are Matrix. The team also uses a marked Vauxhall Vectra Estate but this does not have any Matrix markings on, just the usual Merseyside livery.

The Anti-Social Behaviour Taskforce deals with people who are alleged to be creating anti-social behaviour. They also make raids for drugs and known offenders who are alleged to be lowering the standard of life for the community. They use yellow Mercedes Sprinter police vans (QV01, 02 & 03) with special markings on the side to show they are used by the ASB Taskforce. They have different numbers on, which include QV0 + another digit (Units range from QV01 - QV05 with QV90 as the mobile police station). There is also an ASB Taskforce Peugeot Expert van (QV05) and a 2009 Ford Focus Estate (QV04).

The unit was initially known as Axis, but the use of this name was dropped around the end of 2007.

It was publicly announced on 9 July 2010 that as a result of budget reductions, this department would be closed[11] and they did eventually disband in early 2011.

Merseyside Police Mounted Section has a long history. It is the oldest Provincial Mounted section, formed in 1886 as part of Liverpool City Police. It is an integral part of the Operational Support Unit, and is based at Greenhill Road, Allerton, Liverpool.

The mounted section is an operational specialist section with a staff of 1 Inspector, 2 Sergeants, 14 Constables, 6 civilian stable hands and 14 horses.

The section provides neighbourhoods with an alternative response to reduce the incidents of crime & disorder, using an intelligence-led approach, a tactical option in relation to public order & major incidents, as well as high visibility patrolling at football matches, rugby matches, race meetings and other special events.

Each area within the force has its own allocation of dogs and handlers who work alongside the neighbourhood patrol section.

There are currently 70 general purpose dogs in the force area, 16 of these have extended training for deployment alongside colleagues from the firearms department.

Merseyside Police, like most forces, rely on the German Shepherd Dog for their general purpose police dog work. All general purpose work involves the dogs' outstanding sense of smell, several hundred times superior to that of a human. The dog handler takes advantage of the dogs' natural abilities to search for and detect human scent.

The force also utilises both English Springer Spaniels and Labradors for their specialist detection roles; drugs, firearms, explosives and cadaver. These are the preferred breeds as they have extremely high energy levels and are able to search for long periods. The force currently operates 29 specialist dogs to carry out these detection roles.

Merseyside Police Air Support Group was set up in late 1989 in response to an increase in the number of high speed vehicle pursuits that were occurring after burglaries had been committed outside of the force area. The unit was disbanded in July 2011 amid budget cuts with the loss of its helicopter and Woodvale base.

The early days saw the unit based at Liverpool Airport, but due to rising costs, the unit moved to RAF Woodvale and purpose built accommodation.

The Air Support Group operated a Eurocopter EC 135 helicopter,[12] which was based at RAF Woodvale near Formby. It was new in 2002 replacing a Eurocopter Ecureuil 2.[13] Like its predecessor it is known as Mike One, after the middle two characters of its call sign, XM11. It was also allocated a "matching" aircraft registration, G-XMII.[14] 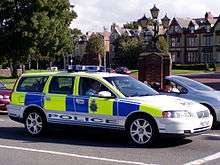 The response/patrol cars for Merseyside Police are Hyundai i30 which replaced the Ford Focus, that are being phased out, in 2011.

The force also has yellow/orange liveried vans. These are mobile CCTV and patrolling vehicles and the Peugeot Expert van was generally the vehicle used, up until late 2008 where they started to be replaced by Ford Transit Connect vans. In addition, yellow Mercedes Sprinter vans are the main protected vehicles. These are used by a wide number of departments, including Matrix and the Anti-Social Behaviour task force. The Mercedes Sprinter can utilise an onboard ANPR system, a grille that drops down onto the front windscreen to help protect the officers from thrown missiles at public order incidents, fire suppression equipment within the engine bay, perspex windows, a loudspeaker facility and finally a mounted spotlight on top of the lightbar to light up scenes at night. In late 2012 Merseyside Police took delivery of three OVIK PANGOLIN [15] [16] Armoured Public Order Vehicles. These vehicles will be used from public order to counter terrorist operations. These vehicles are also in use with the Police Service of Northern Ireland.

Merseyside Police is a partner in the following collaborations:

Officers killed in the line of duty

See also: List of British police officers killed in the line of duty

The Police Roll of Honour Trust lists and commemorates all British police officers killed in the line of duty. The Police Memorial Trust since its establishment in 1984 has erected over 38 memorials to some of those officers.

The following officers of Merseyside Police are listed by the Trust as having died during the time of their service, since the turn of the 20th century:[17]