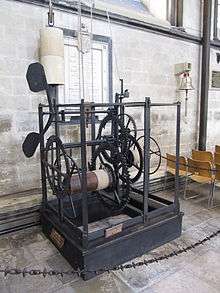 The Salisbury cathedral clock is a large iron-framed clock without a dial located in the aisle of Salisbury Cathedral. Supposedly dating from about 1386, it is claimed to be the oldest working clock in the world,[1] although a similar claim is made of the clock in the cathedral of Beauvais in France (said to date from 1305)[2] and the clock tower of Chioggia in Italy.[3] The clock is one of the group of 14th to 16th century clocks to be found in the West of England. (See also Wells, Exeter, Castle Combe, Ottery St Mary, and Wimborne Minster.) An attempt to date this clock to around 1386 was made by T.R. Robinson which has been supported by others. Most of the parts of the striking train are believed to be original. The great wheel of the going train is also believed to be original.

Other clocks from the 14th century (the first century in which the mechanical clock flourished throughout Europe), such as those at Rouen (Gros Horloge), Paris (Heinrich von Wick clock) or Dijon (the clock taken by Philippe le Hardy from Courtrai in 1382), have either been lost, destroyed, or substantially modified. The Wells Cathedral clock might have been made by the same craftsmen as the Salisbury clock, but is usually dated to around 1392, and is now relocated in the Science Museum in London, where it continues to operate.

There are some doubts that the clock displayed in Salisbury Cathedral is actually the clock mentioned in 1386, as the construction is quite advanced and more comparable to clocks made in the 16th and 17th century than those made in the 14th century. The question if this is the 1386 clock is quite important as the Wells Cathedral clock was previously dated in the 16th century, but then dated 1392 after the discovery of the Salisbury clock in 1928. Dating mistakes for old turret clocks are not uncommon. The Dover Castle clock was initially dated in the 14th century, only to be later revised to around 1600.

A clock in Salisbury Cathedral that struck the hours was mentioned in 1306. This was probably one of the precursors of the 1386 clock, one of the many early examples of mechanical water clocks that are mentioned from c. 1280 onwards.

The clock was found in 1928, set aside in the cathedral tower. At that time it had a pendulum, which appeared to have been installed at a later date, replacing a verge and foliot. The clock was restored in 1956, and a new verge and foliot were installed. There were no drawings or documents available, so it is unlikely that the original foliot and verge escapement looked exactly like the one now installed in the clock.

The striking train of the clock is believed to be original.

Like many of these more practical devices, its main purpose was to strike a bell at precise times. It probably did not have a dial. The wheels and gears are mounted in a four-post wrought iron frame. The framework was not held together with nuts and bolts (which had not been invented), but rather with metal wedged tenons.

Before the weights reach the floor, they have to be wound back up again, a task that explains the presence of two large wheels shaped like steering wheels at either end of the clock.

The clock was a "single strike" clock that struck only on the hour. It made one strike per hour of the day (e.g. 12 strikes at noon). The left half of the clock (as in the photograph above), is the striking train; the right half is the going train.

At the end of the 17th century, the Salisbury clock, like many others, was modified from verge and foliot to pendulum and anchor operation. This usually made clocks much more accurate, even though trials in the early 1990s by Michael Maltin showed that the clock was running to within two minutes a day if the rope on the barrel was kept in a single layer. As soon as there are two layers, there is more torque applied to the barrel by the weight and the clock will go faster. As a single layer of winding is enough to keep the clock going for 12 hours, it could have been kept exact to within 2 minutes per day if it had been wound twice per day.

In 1790, the old bell tower 'on the ditch of the close of the canons of the said church' mentioned in the deed of 1386 which had housed the clock was demolished, so the clock was moved to the Cathedral's central tower. In 1884, a new clock was installed and the old one was left to the side.

The clock was re-discovered in the tower in 1928 by T.R. Robinson, an horological enthusiast who went up the clock tower to see the new clock (installed in 1884). The presence of the old clock was known to many, but nobody attributed much importance to the old clock. It was only T.R. Robinson who believed that it was the clock mentioned in 1386. From photos taken in 1928, it looked to be fairly complete. Eventually its historic importance was realised. It was first put on display in the Cathedral's North transept. Then, in 1956, the clock was restored to its original condition and started working again. The pendulum and recoil escapement were replaced by a new verge and foliot escapement, thus restoring the clock to something like its original design.

Today, the escapement operates, but the striking mechanism has been disabled.

Messrs. John Smith & Sons of Derby received the clock in February 1956. It was taken apart for the transport. They reassembled the clock in their workshop and compared it to existing clocks in the Science Museum before deciding how to restore it.

The help of Rolls Royce was enlisted to have X-ray photographs of two of the wheel arbors taken. This confirmed that the two arbors of the going train had been lengthened when the clock had been converted to pendulum operation. Subsequent investigations revealed that the clock had actually been converted twice, as remains of an earlier pendulum escapement were discovered. 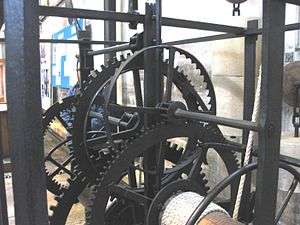 The going train of the clock

Seen from the going train side, the great wheel with the winding barrel turns anti-clockwise, and the escapement wheel turns clockwise. 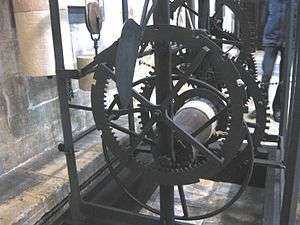 The striking train of the clock

One peculiarity of this clock is that the count wheel only appears to have 11 notches, but the clock strikes 12 times each complete turn. This is because the first strike (when the clock strikes one) is executed whilst the lever is still within the first, wider, notch. The locking piece is lifted out of the hoop of the hoop wheel, which then turns once, which leads to the great wheel turning 1/8 and striking once. Then the locking piece falls back into the hoop wheel. The fly will continue to turn until it stops gently on his own as it has a ratchet mechanism, which protects the bird cage on the fly arbor.