Tóibín is currently Irene and Sidney B. Silverman Professor of the Humanities at Columbia University and succeeded Martin Amis as professor of creative writing at the University of Manchester.[3] He was hailed as a champion of minorities as he collected the 2011 Irish PEN Award.[4] In 2011, he was named one of Britain's Top 300 Intellectuals by The Observer.[5]

Tóibín was born in 1955 in Enniscorthy, County Wexford, in the southeast of Ireland. Tóibín's parents were Bríd and Michael Tóibín.[6] He is the second youngest of five children. His grandfather, Patrick Tobin, was a member of the IRA, as was his grand-uncle Michael Tobin. Patrick Tobin took part in the 1916 Rebellion in Enniscorthy and was subsequently interned in Frongoch in Wales. Tóibín's father was a teacher who was involved in the Fianna Fáil party in Enniscorthy; he died when Colm was 12 years old.

Tóibín grew up in a home where there was, he said, "a great deal of silence."[7] Unable to read until the age of nine, he was overcome by a stammer.[8] He received his secondary education at St Peter's College, Wexford, where he was a boarder between 1970 and 1972. He later spoke of finding some of the priests attractive.[9]

In July 1972, aged 17, he had a summer job as a barman in the Grand Hotel in Tramore, County Waterford, working from six in the evening to two in the morning. He spent his days on the beach, reading The Essential Hemingway, the copy of which he still professes to have, its "pages stained with seawater." The book developed in him a fascination with Spain, led to a wish to visit that country, and gave him "an idea of prose as something glamorous, smart and shaped, and the idea of character in fiction as something oddly mysterious, worthy of sympathy and admiration, but also elusive. And more than anything, the sheer pleasure of the sentences and their rhythms, and the amount of emotion living in what was not said, what was between the words and the sentences."[10]

He progressed to University College Dublin, graduating in 1975. Immediately after graduation, he left for Barcelona. Tóibín's first novel, 1990's The South, was partly inspired by his time in Barcelona, as was, more directly, his non-fiction Homage to Barcelona (1990). Having returned to Ireland in 1978, he began to study for a master's degree. However, he did not submit his thesis and left academia, at least partly, for a career in journalism.

The early 1980s were an especially bright period in Irish journalism, and the heyday of the monthly news magazine Magill. Tóibín became the magazine's editor in 1982, and remained in the position until 1985. He left due to a dispute with Vincent Browne, Magill's managing director.

The South was followed by The Heather Blazing (1992), The Story of the Night (1996) and The Blackwater Lightship (1999). His fifth novel, The Master (2004), is a fictional account of portions in the life of author Henry James. He is the author of other non-fiction books: Bad Blood: A Walk Along the Irish Border (1994), (reprinted from the 1987 original edition) and The Sign of the Cross: Travels in Catholic Europe (1994).

Tóibín has written two short story collections. His first, Mothers and Sons, which as the name suggests explores the relationship between mothers and their sons, was published in 2006, and was reviewed favourably (including by Pico Iyer in The New York Times). His second, broader collection, The Empty Family, was published in 2010,[11] and was shortlisted for the 2011 Frank O'Connor International Short Story Award.[12]

Tóibín wrote a play, titled Beauty in a Broken Place, which was staged in Dublin in August 2004. He has continued to work as a journalist, both in Ireland and abroad, writing for the London Review of Books among other publications. He has also achieved a reputation as a literary critic: he has edited a book on Paul Durcan, The Kilfenora Teaboy (1997), and The Penguin Book of Irish Fiction (1999); and has written The Modern Library: The 200 Best Novels in English since 1950 (1999), with Carmen Callil. He has also written a collection of essays, Love in a Dark Time: Gay Lives from Wilde to Almodóvar (2002), and a study on Lady Gregory, Lady Gregory's Toothbrush (2002).

Tóibín sent a photograph of Borges to Don DeLillo, who described it as "the face of Borges against a dark background—Borges fierce, blind, his nostrils gaping, his skin stretched taut, his mouth amazingly vivid; his mouth looks painted; he's like a shaman painted for visions, and the whole face has a kind of steely rapture". DeLillo often seeks inspiration from it.[13]

In 2011, The Times Literary Supplement published his poem "Cush Gap, 2007".[1] 2012 brought the publication of The Testament of Mary. In 2014, he released his first full-length novel since Brooklyn (2009), a portrait of a recently widowed mother of four in Wexford struggling through a period of grief, entitled Nora Webster.[2] 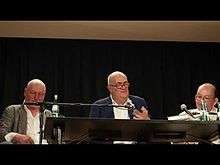 In 2015, ahead of the Marriage Equality referendum, Tóibín delivered a talk titled "The Embrace of Love: Being Gay in Ireland Now" in Trinity Hall, featuring Roger Casement's diaries, the work of Oscar Wilde, John Broderick and Kate O'Brien, and Senator David Norris's 1980s High Court battles.[14] In the same year, he released On Elizabeth Bishop, a critical study which made The Guardian's Best Books of 2015 list twice.[15]

Tóibín has said his writing comes out of silence. He does not favour story and does not view himself as storyteller. He has said, "Ending a novel is almost like putting a child to sleep – it can't be done abruptly."[2]

Tóibín works in the most extreme, severe, austere conditions. He sits on a hard, uncomfortable chair which causes him pain. When working on a first draft he covers the right-hand side only of the page; later he carries out some rewriting on the left-hand side of the page. He keeps a word processor in another room on which to transfer writing at a later time.[16]

Tóibín's work explores several main lines: the depiction of Irish society, living abroad, the process of creativity, and the preservation of a personal identity, focusing especially on homosexual identities, but also on identity when confronted with loss. The "Wexford" novels, The Heather Blazing and The Blackwater Lightship, use Enniscorthy, the town of Tóibín's birth, as narrative material, together with the history of Ireland and the death of his father. An autobiographical account and reflection on this episode can be found in the non-fiction book, The Sign of the Cross. In 2009, he published Brooklyn, a tale of a woman emigrating to Brooklyn from Enniscorthy.

Two other novels, The Story of the Night and The Master, revolve around characters who have to deal with a homosexual identity and take place outside Ireland for the most part, with a character having to cope with living abroad. His first novel, The South, seems to have ingredients of both lines of work. It can be read together with The Heather Blazing as a diptych of Protestant and Catholic heritages in County Wexford, or it can be grouped with the "living abroad" novels. A third topic that links The South and The Heather Blazing is that of creation, of painting in the first case and of the careful wording of a judge's verdict in the second. This third thematic line culminated in The Master, a study on identity, preceded by a non-fiction book on the same subject, Love in a Dark Time. The book of short stories "Mothers and Sons" deals with family themes, both in Ireland and Catalonia, and homosexuality.

Tóibín has written about gay sex in several novels, though Brooklyn contains a heterosexual sex scene in which the heroine loses her virginity.[17] In his 2012 essay collection New Ways to Kill Your Mother: Writers and Their Families he studies the biographies of James Baldwin, J. M. Synge and W. B. Yeats, among others.[18]

His personal notes and work books reside at the National Library of Ireland.[19]

Tóibín is a member of Aosdána and has been visiting professor at Stanford University, The University of Texas at Austin and Princeton University. He has also lectured at several other universities, including Middlebury College, Boston College, New York University, Loyola University Maryland, and The College of the Holy Cross. He was a professor of creative writing at the University of Manchester, succeeding Martin Amis in that post,[3] and currently teaches at Columbia University.

Tóibín is openly gay.[20] He refrains from watching television, admitting to having experienced confusion between the politicians Ed Miliband and Ed Balls.[21] He has expounded on the delights of a greasy fry-up in the morning.[21]

Tóibín's 50th-birthday celebrations in Dublin featured a fracas between the playwright Tom Murphy and theatre impresario Michael Colgan. Murphy smashed his plate of curry down on Colgan's head.[22]