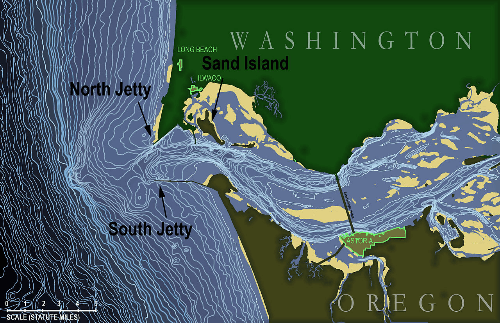 The bar is where the river's current dissipates into the Pacific Ocean, often as large standing waves. The waves are partially caused by the deposition of sediment as the river slows, as well as mixing with ocean waves. The waves, wind, and current are hazardous for vessels of all sizes. The Columbia current varies from 4 to 7 knots westward, and therefore into the predominantly westerly winds and ocean swells, creating significant surface conditions.[2][3] Unlike other major rivers, the current is focused "like a fire hose" without the benefit of a river delta.[4] Conditions can change from calm to life-threatening in as little as five minutes due to changes of direction of wind and ocean swell.[5] Since 1792, approximately 2,000 large ships have sunk in and around the Columbia Bar, and because of the danger and the numerous shipwrecks the mouth of the Columbia River acquired a reputation worldwide as the Graveyard of the Pacific.[6]

The nearby United States Coast Guard Station Cape Disappointment, Washington, is renowned for operating in some of the roughest sea conditions in the world, and is home to the National Motor Lifeboat School. It is the only school for rough weather and surf rescue operation in the US, and is respected internationally as a center of excellence for heavy boat operations.[7]

Approximately 16 bar pilots, earning about $180,000 per year, guide ships across the bar, often boarding ships by helicopter.[8] They generally consider "the bar" to be the area between the north and south jetties and Sand Island (see detail of bathymetric map for locations of these).

The Columbia Bar is part of a set of major marine coastal hazards along the Pacific Northwest coast, including Cape Flattery at the northwest tip of the Olympic Peninsula and Cape Scott, which is at the north tip of Vancouver Island. Historically the region's mariner's nickname was the Graveyard of the Pacific, and it is studded with thousands of shipwrecks. The "Graveyard" also includes the rocky, rugged shoreline of the west coast of Vancouver Island, the shores of the Olympic Peninsula, and the Strait of Juan de Fuca.[9][10]

As a practical tip, small craft are advised to cross the bar during the incoming flood tide, staying toward the outside of the navigational channel to avoid large ships which move at 20 to 30 knots.