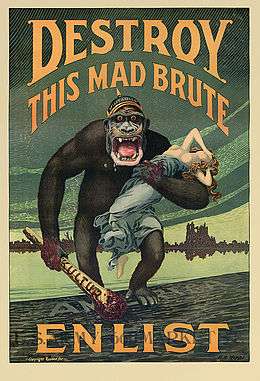 The Committee on Public Information, also known as the CPI or the Creel Committee, was an independent agency of the government of the United States created to influence U.S. public opinion regarding American participation in World War I. Over just 26 months, from April 14, 1917, to June 30, 1919, it used every medium available to create enthusiasm for the war effort and enlist public support against foreign attempts to undercut America's war aims. It primarily used propaganda techniques to accomplish these goals. 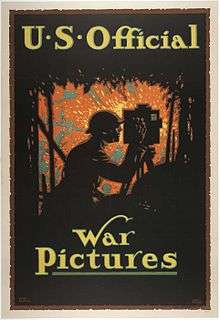 Creel urged Wilson to create a government agency to coordinate "not propaganda as the Germans defined it, but propaganda in the true sense of the word, meaning the 'propagation of faith.'"[3] He was a journalist with years of experience on the Denver Post and the Rocky Mountain News before accepting Wilson's appointment to the CPI. He had a contentious relationship with Secretary Lansing.[4] 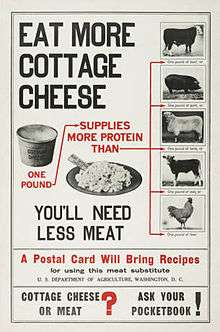 Poster encouraging consumption of more cottage cheese as a replacement for meat.

The purpose of the CPI was to influence American public opinion toward supporting U.S. participation in World War I via a prolonged propaganda campaign.[5] The CPI at first used material that was based on fact, but spun it to present an upbeat picture of the American war effort. In his memoirs, Creel claimed that the CPI routinely denied false or undocumented atrocity reports, fighting the crude propaganda efforts of "patriotic organizations" like the National Security League and the American Defense Society that preferred "general thundering" and wanted the CPI to "preach a gospel of hate."[6]

The committee used newsprint, posters, radio, telegraph, cable and movies to broadcast its message. It recruited about 75,000 "Four Minute Men," volunteers who spoke about the war at social events for an ideal length of four minutes, considering that the average human attention span was judged at the time to be four minutes. They covered the draft, rationing, war bond drives, victory gardens and why America was fighting. It was estimated that by the end of the war, they had made more than 7.5 million speeches to 314 million people in 5,200 communities.[7] They were advised to keep their message positive, always use their own words and avoid "hymns of hate."[8] For ten days in May 1917, the Four Minute Men were expected to promote "Universal Service by Selective Draft" in advance of national draft registration on June 5, 1917.[9]

The CPI staged events designed for specific ethnic groups. For instance, Irish-American tenor John McCormack sang at Mount Vernon before an audience representing Irish-American organizations.[10] The Committee also targeted the American worker and, endorsed by Samuel Gompers, filled factories and offices with posters designed to promote the critical role of American labor in the success of the war effort.[11]

The CPI's activities were so thorough that historians later stated, using the example of a typical midwestern American farm family, that[12]

Every item of war news they saw—in the country weekly, in magazines, or in the city daily picked up occasionally in the general store—was not merely officially approved information but precisely the same kind that millions of their fellow citizens were getting at the same moment. Every war story had been censored somewhere along the line— at the source, in transit, or in the newspaper offices in accordance with ‘voluntary’ rules established by the CPI.

Rejection of the word 'propaganda'

Creel wrote about the Committee's rejection of the word propaganda, saying: "We did not call it propaganda, for that word, in German hands, had come to be associated with deceit and corruption. Our effort was educational and informative throughout, for we had such confidence in our case as to feel that no other argument was needed than the simple, straightforward presentation of facts."[13]

During its lifetime, the organization had over twenty bureaus and divisions, with commissioner's offices in nine foreign countries.[14]

Both a News Division and a Films Division were established to help get out the war message. The CPI's daily newspaper, called the Official Bulletin, began at eight pages and grew to 32. It was distributed to every newspaper, post office, government office, and military base.[15] Stories were designed to report positive news. For example, the CPI promoted an image of well-equipped U.S. troops preparing to face the Germans that were belied by the conditions visiting Congressmen reported.[16] The CPI released three feature-length films: Pershing's Crusaders (May 1918), America's Answer (to the Hun) (August 1918), Under Four Flags (November 1918). They were unsophisticated attempts to impress the viewer with snippets of footage from the front, far less sensational than the "crudely fantastical" output of Hollywood in the same period.[17]

To reach those Americans who might not read newspapers, attend meetings or watch movies, Creel created the Division of Pictorial Publicity.[18] The Division produced 1438 designs for propaganda posters, cards buttons and cartoons in addition to 20000 lantern pictures (slides) to be used with the speeches.[19] Charles Dana Gibson was America's most popular illustrator  – and an ardent supporter of the war. When Creel asked him to assemble a group of artists to help design posters for the government, Gibson was more than eager to help. Famous illustrators such as James Montgomery Flagg, Joseph Pennell, Louis D. Fancher, and N. C. Wyeth were brought together to produce some of World War I's most lasting images.

One early incident demonstrated the dangers of embroidering the truth. The CPI fed newspapers the story that ships escorting the First Division to Europe sank several German submarines, a story discredited when newsmen interviewed the ships' officers in England. Republican Senator Boies Penrose of Pennsylvania called for an investigation and The New York Times called the CPI "the Committee on Public Misinformation."[20] The incident turned the once compliant news publishing industry into skeptics.[21]

Early in 1918, the CPI made a premature announcement that "the first American built battle planes are today en route to the front in France," but newspapers learned that the accompanying pictures were fake, there was only one plane, and it was still being tested.[22] At other times, though the CPI could control in large measure what newspapers printed, its exaggerations were challenged and mocked in Congressional hearings.[23] The Committee's overall tone also changed with time, shifting from its original belief in the power of facts to mobilization based on hate, like the slogan "Stop the Hun!" on posters showing a U.S. soldier taking hold of a German soldier in the act of terrorizing a mother and child, all in support of war bond sales.[24]

The CPI extended its efforts overseas as well and found it had to tailor its work to its audience. In Latin America, its efforts were led where possible by American journalists with experience in the region, because, said one organizer, "it is essentially a newspaperman's job" with the principal aim of keeping the public "informed about war aims and activities." The Committee found the public bored with the battle pictures and stories of heroism supplied for years by the competing European powers. In Peru it found there was an audience for photos of shipyards and steel mills. In Chile it fielded requests for information about America's approach to public health, forest protection, and urban policing. In some countries it provided reading rooms and language education. Twenty Mexican journalists were taken on a tour of the United States.[25]

Creel used his overseas operations as a way to gain favor with Congressmen who controlled the CPI's funding, sending friends of Congressman on brief assignments to Europe.[26] Some of his business arrangements drew Congressional criticism as well, particularly his sale by competitive bidding of the sole right to distribute battlefield pictures.[27] Despite hearings to air grievances against the CPI, the investigating committee passed its appropriation unanimously.[28]

Creel also used the CPI's ties to the newspaper publishing industry to trace the source of negative stories about Secretary of the Navy Josephus Daniels, a former newsman and a political ally. He tracked them to Louis Howe, assistant to Assistant Secretary of the Navy Franklin D. Roosevelt and threatened to expose him to the President.[29] As a Wilson partisan, Creel showed little respect for his Congressional critics, and Wilson enjoyed how Creel expressed sentiments the President could not express himself.[30][31]

The Committee on Public Information was formally disestablished by an act of Congress on June 30, 1919, although the organization's work had been formally completed months before.[32] On August 21, 1919, the disbanded organization's records were turned over to the Council of National Defense.[32]

Creel later published his memoirs of his service with the CPI, How We Advertised America. He wrote:[13]

In no degree was the Committee an agency of censorship, a machinery of concealment or repression. Its emphasis throughout was on the open and the positive. At no point did it seek or exercise authorities under those war laws that limited the freedom of speech and press. In all things, from first to last, without halt or change, it was a plain publicity proposition, a vast enterprise in salesmanship, the world's greatest adventures in advertising...We did not call it propaganda, for that word, in German hands, had come to be associated with deceit and corruption. Our effort was educational and informative throughout, for we had such confidence in our case as to feel that no other argument was needed than the simple, straightforward presentation of the facts.

Walter Lippmann, a Wilson adviser, journalist, and co-founder of The New Republic, was a sharp critic of Creel. He had once written an editorial criticizing Creel for violating civil liberties when he was Police Commissioner of Denver. Without naming Creel, he wrote in a memo to Wilson that censorship should "never be entrusted to anyone who is not himself tolerant, nor to anyone who is unacquainted with the long record of folly which is the history of suppression." After the war, Lippmann criticized the CPI's work in Europe: "The general tone of it was one of unmitigated brag accompanied by unmitigated gullibility" giving shell-shocked Europe to understand that a rich bumpkin had come to town with his pockets bulging and no desire except to please."[33]

The Office of Censorship in World War II did not follow the CPI precedent. It used a system of voluntary cooperation with a code of conduct, and did not disseminate government propaganda.[12]

Among those who participated in the CPI's work were: