The Secretary of War was a member of the United States President's Cabinet, beginning with George Washington's administration. A similar position, called either "Secretary at War" or "Secretary of War," had been appointed to serve the Congress of the Confederation under the Articles of Confederation between 1781 and 1789. Benjamin Lincoln and later Henry Knox held the position. When Washington was inaugurated as the first president under the Constitution, he appointed Knox to continue serving. 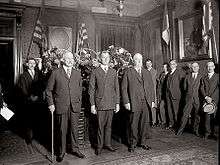 Swearing in of Dwight F. Davis as Secretary of War in 1925. Former Secretaries John W. Weeks and Chief Justice William Howard Taft are standing beside him.