Robert Lansing (/ˈlænsɪŋ/; October 17, 1864 – October 30, 1928) was an American lawyer and Conservative Democratic[1] politician who served as Legal Advisor to the State Department at the outbreak of World War I, and then as United States Secretary of State under President Woodrow Wilson from 1915 to 1920. Before U.S. involvement in the war, Lansing vigorously advocated in favor of the principles of freedom of the seas and the rights of neutral nations. He later advocated U.S. participation in World War I, negotiated the Lansing–Ishii Agreement with Japan in 1917 and was a member of the American Commission to Negotiate Peace at Paris in 1919. 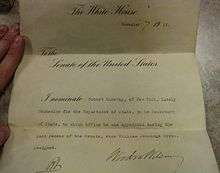 Lansing and Solicitor General of the United States John W. Davis in 1917

Lansing advocated "benevolent neutrality" at the start of World War I. Following the sinking of the RMS Lusitania on 7 May 1915 by the German submarine U-20, Lansing backed Woodrow Wilson in issuing three notes of protest to the German government. William Jennings Bryan resigned as Secretary of State following Wilson's second note, which Bryan considered too belligerent. Lansing replaced Bryan, and said in his memoirs that following the Lusitania tragedy he always had the "conviction that we would ultimately become the ally of Britain".

In 1916 Lansing hired a handful of men who became the State Department's first special agents in the new Bureau of Secret Intelligence. These agents were initially used to observe the activities of the Central Powers in America, and later to watch over interned German diplomats. The small group of agents hired by Lansing would eventually become the U.S. Diplomatic Security Service (DSS).

A few weeks before the formal end of World War I, Lansing informed the crumbling Austro-Hungarian Empire that since the Americans were now committed to the causes of the Czechs, Slovaks and South Slavs, the Empire's proposal to satisfy the tenth of Wilson's Fourteen Points by granting the nationalities autonomy within the Empire was no longer sufficient. Within two weeks, these new nations began to declare themselves independent and Austria-Hungary ceased to exist.

In 1919, Lansing became the nominal head of the US Commission to the Paris Peace Conference. Because he did not regard the League of Nations as essential to the peace treaty, Lansing began to fall out of favor with Wilson, for whom participation in the League of Nations was a primary goal. During Wilson's stroke and illness, Lansing called the cabinet together for consultations on several occasions. In addition, he was the first cabinet member to suggest that Vice President Thomas R. Marshall assume the powers of the presidency. Edith Wilson was displeased by Lansing's independence, and requested Lansing's resignation in 1920.

After leaving office Lansing resumed practicing law. He died in New York City on October 30, 1928, and was buried at Brookside Cemetery in Watertown, New York. 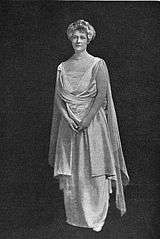 In 1890, Lansing married Eleanor Foster, the daughter of Secretary of State John W. Foster.[2] Eleanor's older sister Edith was the mother of John Foster Dulles, who also became Secretary of State, Allen Welsh Dulles who served as Director of Central Intelligence, and Eleanor Lansing Dulles, an economist and high level policy analyst and advisor for the State Department.[3][4]

Lansing was associate editor of the American Journal of International Law, and with Gary M. Jones was the author of Government: Its Origin, Growth, and Form in the United States (1902). He also wrote: The Big Four and Others at the Peace Conference, Boston (1921) and The Peace Negotiations: A Personal Narrative, Boston/New York (1921).