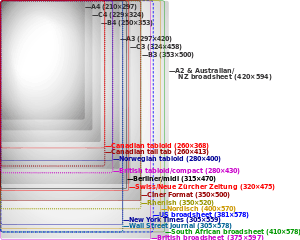 Comparison of some newspaper sizes with metric paper sizes. Approximate nominal dimensions are in millimetres.

A compact newspaper is a broadsheet-quality newspaper printed in a tabloid format (slightly taller), especially one in the United Kingdom. The term as used for this size (not to be confused with 108 × 171 mm or 4.25 × 6.75 inches paper sizes) came into its current use when The Independent began producing a smaller format edition for London's commuters, designed to be easier to read when using mass transit.

Readers from other parts of the country liked the new format, with the result that The Independent introduced it nationally. The Times and The Scotsman copied the format as The Independent increased sales. All three newspapers are now printed exclusively in compact format following trial periods during which both broadsheet and compact version were produced simultaneously.

The term “compact” was coined in the 1970s by the Daily Mail when that newspaper went tabloid, although the Mail now calls itself a tabloid. It is often used to differentiate newspapers with more traditional content from those with a flamboyant or salacious publishing style, even though they may share the same size. The functional opposite of compact is red top, as the nameplates of British sensationalist tabloids tend to be red.

This article is issued from Wikipedia - version of the 10/26/2015. The text is available under the Creative Commons Attribution/Share Alike but additional terms may apply for the media files.