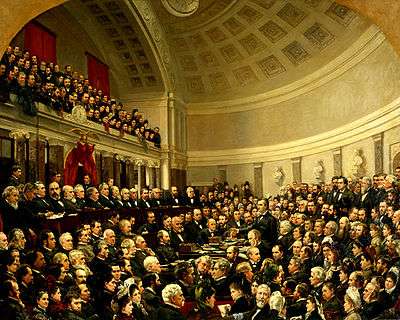 The Electoral Commission was a panel that resolved the disputed presidential election of 1876.

The Electoral Commission was a temporary body created by Congress to resolve the disputed United States presidential election of 1876. It consisted of 15 members. The election was contested by the Democratic ticket, Samuel J. Tilden and Thomas A. Hendricks, and the Republican ticket, Rutherford B. Hayes and William A. Wheeler. Twenty electoral votes, from the states of Florida, Louisiana, Oregon, and South Carolina, were in dispute; the resolution of these disputes would determine the outcome of the election. Facing a constitutional crisis the likes of which the nation had never seen, Congress passed a law forming the Electoral Commission to settle the result.

The Commission consisted of fifteen members: five representatives, five senators, and five Supreme Court justices. Eight members were Republicans; seven were Democrats. The Commission ultimately voted along party lines to award all twenty disputed votes to Hayes, thus assuring his victory in the Electoral College by a margin of 185–184. 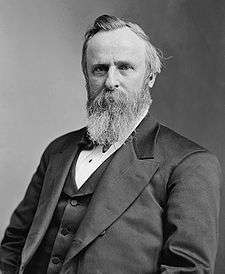 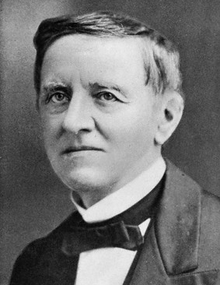 The presidential election was held on November 7, 1876. Tilden carried his home state of New York and most of the South, while Hayes' strength lay in New England, the Midwest, and the West. Early returns suggested that Tilden had won the election; many major newspapers prematurely reported a Democratic victory in their morning editions. However, several other newspapers were more cautious; for example, the headline of The New York Times read: "The Results Still Uncertain." The returns in several states were tainted by allegations of electoral fraud; each side charged that ballot boxes had been stuffed, that ballots had been altered, and that voters had been intimidated.

In Louisiana, unofficial tallies indicated that Tilden had carried the state by over 6000 votes. However, the Republican-controlled returning board threw out the votes from several areas, citing fraud and voter intimidation; in all, over 15,000 votes (of which more than 13,000 were for Tilden) were discounted. As a result, Hayes won Louisiana's eight electoral votes, while the Republican candidate won the governorship. In response, the Democratic Party instituted a rival state government under Francis T. Nicholls. This rival administration, in turn, certified that Tilden had won.[1]

A nearly identical scenario played out in South Carolina, where initial returns suggested that Hayes had won the presidential election, while the Democratic Party had triumphed in the gubernatorial contest. Here, too, the Republican-controlled returning board discounted several votes, ensuring the election of a Republican Governor and Legislature. As in Louisiana, the Democratic Party organized a rival state government, under the leadership of Wade Hampton III. Hampton's government declared Tilden the victor in the presidential election.[1]

Similar problems arose in Florida. The initial count showed Hayes ahead by 43 votes, but after a correction was made, Tilden took a lead of 94 votes. Subsequently, the returning board disallowed numerous ballots, delivering the election to Hayes by nearly a thousand votes. The board also declared that the Republican candidate had won the gubernatorial election; however, the Florida Supreme Court overruled them, instead awarding the victory to Democrat George Franklin Drew. Drew then announced that Tilden, not Hayes, had carried Florida.[2]

Further complications arose in Oregon. Although both sides acknowledged that Hayes had won the state, Tilden's supporters questioned the constitutional eligibility of John W. Watts, one of the Hayes electors. The Constitution provides that "no…person holding an office of trust or profit under the United States shall be appointed an elector." Watts was a United States postmaster; however, he resigned from his office a week after the election, long before the scheduled meeting of the Electoral College. Nevertheless, the state's Democratic Governor, LaFayette Grover, removed Watts as an elector, replacing him with C. A. Cronin (a Tilden supporter).[2]

On December 6, 1876, the electors met in the state capitals to cast their ballots. In Florida, Louisiana, and South Carolina, both the Democratic and the Republican slates of electors assembled, and cast conflicting votes. In Oregon, likewise, both Watts and Cronin cast ballots. Thus, from each of these four states, two sets of returns were transmitted to Washington.

Tilden had won the popular vote by almost a quarter of a million votes, but he did not have a clear Electoral College majority. He received 184 uncontested electoral votes, while Hayes received 165, with both sides claiming the remaining twenty (4 from Florida, 8 from Louisiana, 7 from South Carolina, and 1 from Oregon). A total of 185 votes constituted an Electoral College majority; hence, Tilden needed only one of the disputed votes, while Hayes needed all twenty.

The election dispute gave rise to a constitutional crisis. Many Democrats who believed that they had been cheated threatened: "Tilden or Blood!" Congressman Henry Watterson of Kentucky declared that an army of 100,000 men was prepared to march on Washington if Tilden was denied the presidency. Since the Constitution did not explicitly indicate how Electoral College disputes were to be resolved, Congress was forced to consider other methods to settle the crisis. Many Democrats argued that Congress as a whole should determine which certificates to count. However, the chances that this method would result in a harmonious settlement were slim, as the Democrats controlled the House, while the Republicans controlled the Senate. Several Hayes supporters, on the other hand, argued that the President pro tempore of the Senate had the authority to determine which certificates to count, because he was responsible for chairing the congressional session at which the electoral votes were to be tallied. Since the office of President pro tempore was occupied by a Republican, Senator Thomas W. Ferry of Michigan, this method would have favored Hayes. Still others proposed that the matter should be settled by the Supreme Court.[2]

In late December, each House created a special committee charged with developing a mechanism to resolve the issue. The committees ultimately settled upon creating an Electoral Commission. Many Republicans objected to the idea, insisting that the President pro tempore should resolve the disputes himself. Rutherford Hayes charged that the bill was unconstitutional.[3] However, a sufficient number of Republicans joined the Democrats to ensure the legislation's passage. On January 25, 1877, the Senate voted in favor of the Electoral Commission Bill 47-17; the House followed suit the next day, 191-86. On January 29, President Ulysses S. Grant signed the bill into law.[2]

Membership of the Commission

Originally, it was planned that the Commission would consist of seven Democrats, seven Republicans, and one independent. Justice David Davis, who was widely regarded as a political independent, was supposed to be the fifth justice on the Commission. According to one historian, "[n]o one, perhaps not even Davis himself, knew which presidential candidate he preferred."[5] Just as the Electoral Commission Bill was passing Congress, the Legislature of Illinois elected Davis to the Senate. Democrats in the Illinois Legislature believed that they had purchased Davis' support by voting for him. However, they had made a miscalculation; instead of staying on the Supreme Court so that he could serve on the Commission, he promptly resigned as a Justice in order to take his Senate seat.[2]

With no independents left on the Supreme Court, the final seat on the Electoral Commission was given instead to Justice Joseph Philo Bradley, a Republican. As a result, the GOP held a one-seat majority on the body. Bradley would, in every case, vote with his fellow Republicans to give the disputed electoral votes to Hayes.[4]

The membership of the Commission was as follows:

Proceedings of the Commission

The tribunal began hearing arguments on February 1, 1877. Tilden's lawyers argued that the Commission should investigate the actions of the state returning boards, and reverse those actions if necessary. Hayes' counsel, on the other hand, suggested that the Commission should merely accept the official returns certified by the state Governor without inquiring into their validity. To do otherwise, it was argued, would have violated the sovereignty of the states. The Commission voted 8-7, along party lines, in favor of the Republican position.

Subsequently, in a series of party-line votes, the Commission awarded all twenty disputed electoral votes to Hayes. Under the Electoral Commission Act, the Commission's findings were final unless overruled by both houses of Congress. Although the Democrat-controlled House of Representatives repeatedly voted to reject the Commission's decisions, the Republican-controlled Senate voted to uphold them. Thus, Hayes' victory was assured. 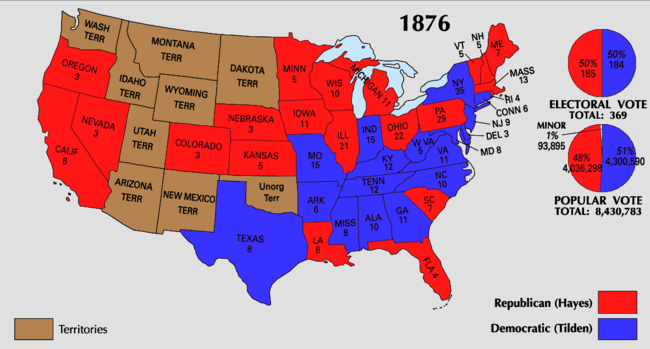 The final results of the presidential election of 1876 are shown above.

Unable to overturn the Commission's decisions, many Democrats instead tried to obstruct them. Congressman Abram Hewitt, the Chairman of the Democratic National Committee, made a spurious challenge to the electoral votes from Vermont, even though Hayes had clearly carried the state. The two houses then separated to consider the objection. The Senate quickly voted to overrule the objection, but the Democrats conducted a filibuster in the House of Representatives. In a stormy session that began on March 1, 1877, the House debated the objection for about twelve hours before overruling it. Immediately, another spurious objection was raised, this time to the electoral votes from Wisconsin. Again, the Senate voted to overrule the objection, while a filibuster was conducted in the House. However, the Speaker of the House, Democrat Samuel J. Randall, refused to entertain dilatory motions. Eventually, the filibusterers gave up, allowing the House to reject the objection in the early hours of March 2. The House and Senate then reassembled to complete the count of the electoral votes. At 4:10 AM on March 2, Senator Ferry announced that Hayes and Wheeler had been elected to the presidency and vice presidency, by an electoral margin of 185-184.[2]

Some historians have argued that Democrats and Republicans reached an unwritten agreement (known as the Compromise of 1877) under which the filibuster would be dropped in return for a promise to end Reconstruction. This thesis was most notably advanced by C. Vann Woodward in his 1951 book, Reunion and Reaction. Other historians, however, have argued that no such compromise existed.[7]

Many of Tilden's supporters believed that he had been cheated out of victory. Hayes was variously dubbed "Rutherfraud," "His Fraudulency," and "His Accidency." On March 3, the House of Representatives went so far as to pass a resolution declaring its opinion that Tilden had been "duly elected President of the United States." Nevertheless, Hayes was peacefully sworn in as President on March 5.[5] Many historians have complained that, after entering office, Hayes rewarded those who helped him win the election dispute with federal offices.[4] Most notably, one of the lawyers who argued Hayes' case before the Electoral Commission, William M. Evarts, was appointed Secretary of State. Another, Stanley Matthews, was nominated to the Supreme Court.

In May 1878, the House of Representatives created a special committee charged with investigating the allegations of fraud in the 1876 election. The eleven-member committee was chaired by Clarkson Nott Potter, a Democratic congressman from New York. The committee, however, could not uncover any evidence of wrongdoing by the President. At approximately the same time, the New York Tribune published a series of coded telegrams that Democratic Party operatives had sent during the weeks following the 1876 election. These telegrams revealed attempts to bribe election officials in states with disputed results. Despite attempts to implicate him in the scandal, Samuel Tilden was declared innocent by the Potter Committee.[8]

To prevent a repetition of the 1876 debacle, Congress passed the Electoral Count Act in 1887. Under this law, 3 U.S.C. § 5, a state's determination of electoral disputes is conclusive in most circumstances. The President of the Senate opens the electoral certificates in the presence of both houses, and hands them to the tellers, two from each house, who are to read them aloud and record the votes.[9] If the same state sends multiple returns to Congress, then whichever return has been certified by the executive of the state is counted, unless both houses of Congress decide otherwise. The interpretation of this act was the subject of controversy in Bush v. Gore, a case relating to the disputed presidential election of 2000.