Samuel Jones Tilden (February 9, 1814 – August 4, 1886) was the 25th Governor of New York and the Democratic candidate for the U.S. Presidency in the disputed election of 1876, winning a popular vote majority, but ultimately being denied victory by the electoral college. A political reformer, he was a Bourbon Democrat who worked closely with the New York City business community and led the fight against the corruption of Tammany Hall.

Born and raised in New Lebanon, New York, Tilden came from a family that was well off and well known as a maker of patent medicines. He studied at Yale University and New York University School of Law, and became an attorney in New York City in 1841. A Democrat in politics, he became a skilled practitioner of corporate and railroad law, and also served as New York City's corporation counsel and a member of the New York State Assembly in the 1840s.

During the years prior to the American Civil War, Tilden counseled patience and compromise with the Southern states on the slavery question. Once the war began, he supported the Union, but was also critical of Abraham Lincoln's wartime administration.

As chairman of New York's Democratic State Committee after the war, Tilden initially worked well with the party's Tammany Hall faction, but broke with them over the corruption of the Tweed Ring. After serving again in the state Assembly, Tilden was elected Governor of New York in 1874. In 1876 he was the Democratic nominee for President of the United States. He lost to Republican Rutherford B. Hayes in a disputed election, with Southern Democrats conceding the presidency in part for the promise of an end to Reconstruction.

After losing the presidency, Tilden resumed the practice of law, in addition to managing his banking and business ventures. He was considered by the Democrats for their presidential nomination in 1880 and 1884, but was not an active candidate. He died at his estate in Yonkers in 1886, and was buried at Cemetery of the Evergreens in New Lebanon.

A lifelong bachelor, Tilden's worth at his death was over $7 million (more than $176 million in 2014); among his philanthropic donations was the funding of the institution now known as the New York Public Library. 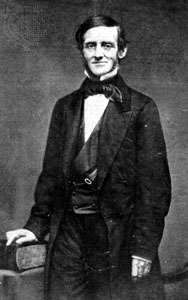 Samuel Tilden as a young man. 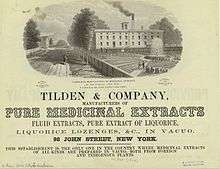 1856 advertisement for the Tilden Company.

Tilden was born in New Lebanon in New York. He was descended from Nathaniel Tilden, an early English settler who came to America in 1634. His father and other family members were the makers of Tilden's Extract, a popular patent medicine of the 1800s and early 1900s derived from cannabis.[1][2]

He studied at Yale University,[3] then studied law at New York University School of Law.[4] He was admitted to the bar in 1841, and became a skilled corporate lawyer, with many railroads as clients in the shaky railroad boom decade of the 1850s. His legal practice,[5] combined with shrewd investments, made him rich. Tilden's success at money management and investing caused many of Tilden's friends, relatives and political allies, including Martin Van Buren, to allow Tilden to manage their finances.[6][7]

He was a member of the New York State Assembly (New York Co.) in 1846, and a delegate to the New York State Constitutional Convention of 1846.[9] In 1848, largely on account of his personal attachment to Martin Van Buren, he participated in the revolt of the "Barnburners" or Free-Soil faction of the New York Democrats, which nominated Van Buren for President and helped ensure the defeat of Democrat Lewis Cass and victory by Whig nominee Zachary Taylor.[10] He was among the Barnburners who later returned to the Democratic Party rather than joining the anti-slavery Republican Party. In 1855, Tilden was the candidate of the Soft faction (Barnburners who favored compromise and reconciliation with the Democratic Party) for New York State Attorney General.[11] In 1859 he was an unsuccessful candidate for New York City Corporation Counsel.[12]

In the years immediately preceding the American Civil War, Tilden favored a conciliatory approach to the slaveholding states and opposed going to war. Once the war started, Tilden supported the Union, but was critical of Abraham Lincoln's "strong executive" approach to the presidency. After the war, Tilden again favored conciliation and opposed the Radical Republican approach to Reconstruction. He was a delegate to the 1867 New York Constitutional Convention.[13]

Tilden became chairman of the Democratic State Committee after the Civil War. After initially having good relations with William M. Tweed and working closely together with him in the Democratic Party,[14] Tilden came into conflict with the Tweed Ring and the Tammany Hall Democratic organization over issues including bribery and corruption.

In 1867 Tilden received an honorary LL.D. from New York University.[15]

Tilden led the reform movement in the Democratic Party, and played a key role in the Tweed Ring's demise. He was again a member of the New York State Assembly (New York Co., 18th D.) in 1872, and took a leading part in the impeachment of Judge George G. Barnard. By analyzing the bank accounts of certain members of the Tweed Ring, he obtained legal proof of the principle on which the spoils had been divided.[16][17]

In 1874 Tilden was the successful Democratic nominee for Governor, receiving 52 percent of the vote against incumbent Republican John Adams Dix and Prohibition Party nominee Myron H. Clark.[18] As a reform-spirited Governor in 1875 and 1876, he turned his attention to a second set of plunderers, the "Canal Ring", made up of members of both parties who had been systematically robbing New York State by overcharging for maintenance and construction of the New York State Canal System. Tilden succeeded in breaking them up, and his successful service as Governor gained him the presidential nomination.[19]

In 1875 he received an LL.D. from Yale University.[20] At the same time Yale conferred the LL.D., he was also enrolled as a graduate of Yale's Class of 1837 and received his Bachelor of Arts degree.[21] 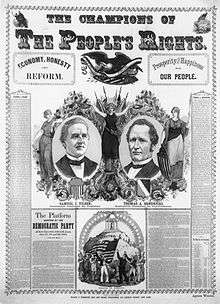 Campaign poster for the election of 1876.

During the 1876 presidential election, Tilden won the popular vote over his Republican opponent, Rutherford B. Hayes, proving that the Democrats were once again competitive in the American political process following the Civil War. But the result in the Electoral College was in question because the states of Florida, Louisiana, and South Carolina each sent two sets of Electoral Votes to Congress. (There was separately a conflict over one elector from Oregon, who was disqualified on a technicality.)

Republicans had taken over the state governments in the South during Reconstruction, but were unpopular with the overwhelmingly Democratic white southerners, many of whom resented what they perceived as interference from the North and blamed the Republicans for the Civil War. However Republicans were almost universally preferred by the South's newly enfranchised blacks. By 1876 white southerners had regained control of most southern states, but in one state with a black majority (South Carolina) and two with very large black minorities (Louisiana and Florida) Republicans still held power. Democrats used violence and intimidation to keep blacks from the polls, while Democrats claimed that Republicans weren't simply disallowing votes tainted by violence but also legitimate returns that favored the Democratic party. Both sides claimed victory though the Democratic claim was tainted by violence and the Republican by fraud. As a result, one set of Electoral Votes from each of these three states had cast their ballots for the Republican Hayes, and another set had cast their ballot for the Democrat Tilden. Without these three states, Tilden had won 184 Electoral Votes, but needed 185 to win the Presidency. If he had taken even one state, he would have become President. However, if Hayes were to win all the contested votes, he would receive 185 Electoral Votes and win the election. 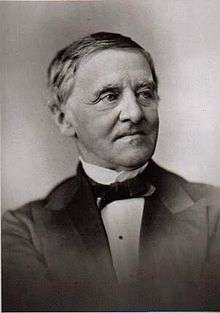 While the Republicans boldly claimed the election, Tilden mystified and disappointed his supporters by not fighting for the prize or giving any leadership to his advocates. Instead he devoted more than a month to the preparation of a complete history of the electoral counts over the previous century to show it was the unbroken usage of Congress, not of the President of the Senate, to count the electoral votes.[22]

Congressional leaders tried to resolve the crisis by on January 25, 1877, creating a 15-member Electoral Commission that would determine which set of votes were valid. The Commission consisted of five members from the Republican-controlled Senate (three Republicans and two Democrats), and five from the Democratic-controlled House of Representatives (three Democrats, two Republicans). The remaining five members were chosen from the Supreme Court– originally two Republicans, two Democrats, and independent Justice David Davis. Davis, however, was elected to the US Senate from Illinois, resigned from the Court and turned down the commission appointment. (Ironically, the election of Davis was the brainchild of Tilden's nephew who assumed it would secure his commission vote for the Democratic side.)[23][24] Justice Joseph P. Bradley, a Republican, was named to replace Davis. The Commission voted 8–7 along party lines to award all the votes to Hayes. The dispute, however, did not end, as some Democrats threatened to filibuster in the Senate. Eventually, enough were dissuaded from this action. Some say this was the result of a political deal, the informal and unwritten so-called Compromise of 1877 whereby the Democrats agreed to Hayes's election and he agreed to withdraw all federal troops in the South, bringing an end to Republican Reconstruction in the South. In fact, Hayes had long before, in his letter accepting the Republican nomination, indicated his desire that the South enjoy "the blessings of honest and capable local government" (but only with guarantees that the states would guard the civil rights of the freedmen).[25]

Upon his defeat, Tilden said, "I can retire to private life with the consciousness that I shall receive from posterity the credit of having been elected to the highest position in the gift of the people, without any of the cares and responsibilities of the office." 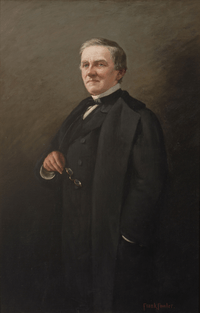 A portrait of Samuel Jones Tilden.

Tilden was considered the front-runner for the Democratic nomination in the 1880 presidential election. His chances of obtaining it suffered a blow in October 1878 when the Republican New York Tribune claimed to have unearthed and decoded secret "cipher" telegrams sent by Tilden's agents at the height of the 1876 electoral dispute, apparently offering bribes to vote-counters in the contested states: $50,000 for Florida, $80,000 for South Carolina, and $5,000 for the single vote from Oregon.

Tilden denied all knowledge of such dispatches, and appeared voluntarily before a Congressional sub-committee in New York City to clear himself of the charge. The attempt to implicate him in corrupt transactions failed, and he was cleared of any personal wrongdoing. Nevertheless, his political opponents endeavored to make capital out of the 'Cipher Dispatches' in subsequent campaigns. The controversy somewhat damaged Tilden's reputation for honesty, and he did not run.[26]

Tilden was again considered likely to become a candidate for the Democratic nomination in the 1884 presidential election, but his health began to fail and he declined to run.[27][28] 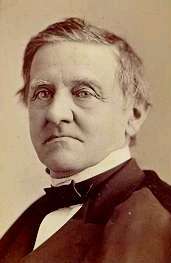 Tilden retired in the early 1880s, living as a near-recluse at his 110-acre (0.45 km2) estate, Graystone (Greystone), in Yonkers, New York. He died a bachelor at Greystone on August 4, 1886, at 8 am. He is buried at Cemetery of the Evergreens in New Lebanon, Columbia County, New York.[29] In reference to the 1876 election, Tilden's gravestone bears the words, "I Still Trust The People".

The Samuel J. Tilden House at 15 Gramercy Park South, which he owned from 1860 until his death, is now used by the National Arts Club. 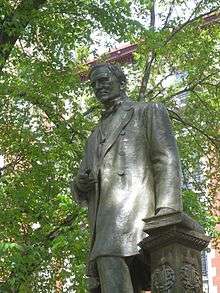