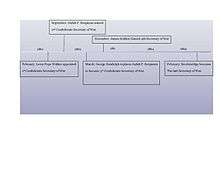 This timeline provides an accurate depiction of the Secretaries of War for the Confederate States of America.

The Secretaries of War

Confederate President Jefferson Davis was twenty-third Secretary of War of the United States, serving under U.S. President Franklin Pierce from 7th March 1853 until 4th March 1857 (almost exactly four years). However, he never served in this capacity in the Confederate States.

Davis appointed Leroy Pope Walker as the first Confederate Secretary of War in February of 1861. Walker’s first major role involved the situation at Fort Sumter. Communicating often with P.G.T. Beauregard, he advocated for no direct clash with the Union. He also focused on the Border States, and was instrumental in ordering the muster, organization and supply of the upper states when they seceded. His stint as Secretary of War was marked by inefficiency and clashes with Jefferson Davis. His lack of experience in the military field hampered his ability to manage the war effort, and he received the blame for the early supply and organizational issues of the Confederacy. In the wake of the "failure" of the Confederate army to pursue fleeing troops after the First Battle of Bull Run, the Davis administration received lots of criticism, and Walker began to be criticized more. Walker resigned in September 1861 after a dispute with President Jefferson Davis and mounting Congressional criticism.[7]

Davis named Judah P. Benjamin acting Secretary of War the same September, and he was confirmed in November 1861. Benjamin’s addition responded to the organizational shortcomings that the War Department office was criticized for most. However, Benjamin clashed repeatedly with Confederate generals, and the downturn and increasing casualties of the war opened Benjamin up to extensive criticism. Antisemitism[8] angled against him, a prominent and known still-practicing Jew, became a strong part of this criticism, and intensified as the war effort further diminished in the eyes of the Confederate public. Davis responded to the criticism of his trusted adviser by naming him Acting Secretary of State in March 1862.

Next, Davis tapped Brigadier General George W. Randolph to succeed Benjamin, now Confederate Secretary of State. Randolph placed more emphasis on organization in the Western theater of the war, and his meticulous organization and strong work ethic[9] increased the efficiency of the War Department. However, health problems and conflict with Davis resulted in the early resignation of G.W. Randolph in November 1862. By 1862 Jefferson Davis had to replace three Secretaries of War.

Davis appointed James Seddon to the position of Secretary of War next, and Seddon would be the Confederate official to hold the position for the longest. Seddon’s reportedly "malleable" nature[10] as Secretary of War meshed perfectly with the micromanaging nature of Jefferson Davis’ interactions with the war effort. Seddon clashed repeatedly with Confederate governors, but Seddon's concurrence with Davis on the demotion of General Joseph E. Johnston caused the strongest backlash from Congress. Seddon resigned in January 1865.[11]