For the U.S. Representative from Illinois, see George R. Davis.

Born near Wilmington, North Carolina, George Davis attended the University of North Carolina at Chapel Hill, where he was valedictorian of the class of 1838. He subsequently studied law and was admitted to the bar in 1840. In 1848 he became general counsel of the Wilmington & Weldon Railroad. He held this position the rest of his life.

George Davis was a delegate from North Carolina to the unsuccessful Washington Peace Conference of February 4–27, 1861. He was a delegate to the Provisional Confederate Congress in 1861–1862, and was then elected to the Senate, where he served from 1862 to 1864. In December 1863, President Jefferson Davis appointed him Attorney General. He was in fact related to President Davis. He served in this position from January 2, 1864 until April 24, 1865, in the last days of the Confederacy.

George Davis was captured by U.S. forces at Key West, Florida, on October 18, 1865, and was imprisoned at Fort Hamilton in Brooklyn, New York. He spent several months at Fort Hamilton before being pardoned in 1866. he then returned to law practice in Wilmington. 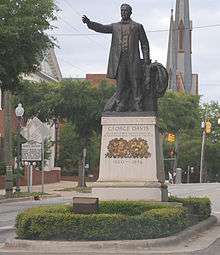