For other uses, see Confluence (disambiguation).

Confluence of rivers, the Mosel flows into the Rhine at Koblenz. The name "Koblenz" itself has its origin in the Latin name "Confluentes" 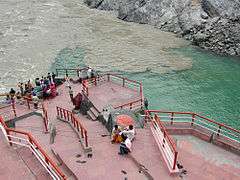 Confluence of the Bhagirathi and Alaknanda Rivers to produce the Ganges at Devprayag, India. Note the swirl of sediment from the Alaknanda. 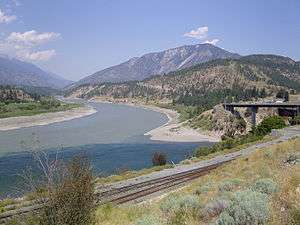 The confluence of the muddy Fraser and clearer Thompson rivers in Lytton, British Columbia, Canada. 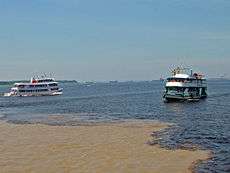 The confluence of the Rio Negro (black) and the Rio Solimões (turbid) near Manaus, Brazil. 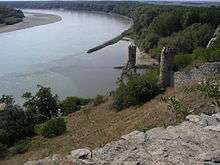 Confluence of the Danube (light blue) and the Morava (dark blue) in Devín on the border between Austria and Slovakia. 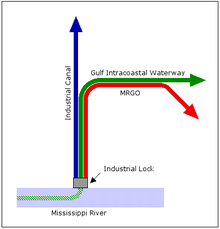 In geography, a confluence is the meeting of two or more bodies of water. Also known as a conflux,[1] it refers either to the point where a tributary joins a larger river, called the main stem, or where two streams meet to become the source of a river of a new name, such as the confluence of the Monongahela and Allegheny rivers in Pittsburgh, Pennsylvania creating the Ohio River.

The term is also used to describe the meeting of tidal or other non-riverine bodies of water, such as two canals[2] or a canal and a lake.[3] A one-mile (1.6 km) portion of the Industrial Canal in New Orleans accommodates the Gulf Intracoastal Waterway and the Mississippi River-Gulf Outlet Canal; therefore those three waterways are confluent there.