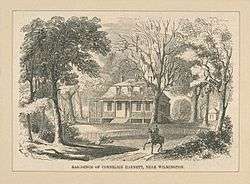 Harnett was born on April 10, 1723 to Cornelius and Elizabeth Harnett in Chowan County, North Carolina. Soon after he was born, his parents moved to Wilmington. As an adult, he obtained a plantation in Wilmington. He became a leading merchant there, and was interested in farming, milling, and mercantile ventures. Harnett was an Episcopalian, but has also been identified as a deist.[2][3] Though he was an intelligent man, there is little known about his educational background. His intelligence served him well in his passion for politics.[4]

Harnett married Mary Holt where they lived on his second plantation, Poplar Grove, located in Maynard (currently Hilton) which is north of Wilmington.[5] During Harnett's political career, he maintained his relationship with his wife through letters. William Wilkerson,his associate, would deliver the letters.[6]

Harnett's death came about after being captured and "thrown across a horse like a sack of meal".[5] He was captured by the British upon their occupation of Wilmington in January 1781. His health steadily declined while imprisoned. He died April 28, 1781, shortly after being released on parole. He was buried in St. James Episcopal Church in Wilmington, North Carolina.[7]

In 1750 Harnett became involved in public affairs when he was elected Wilmington town commissioner. He was appointed a justice of the peace for New Hanover County by Governor Gabriel Johnston. Harnett was elected to represent Wilmington in the North Carolina General Assembly in 1754.

In 1765, Harnett became the chairman of the Sons of Liberty, and was a leader in the resistance to the Stamp Act. In 1775–1776, he served as the first president of the North Carolina Provincial Council, or Council of Safety, essentially the chief executive of the revolutionary state, although with limited powers. In 1776 he was excepted by Sir Henry Clinton from his proclamation of general amnesty. He was a member of the Continental Congress for 1777–1779.